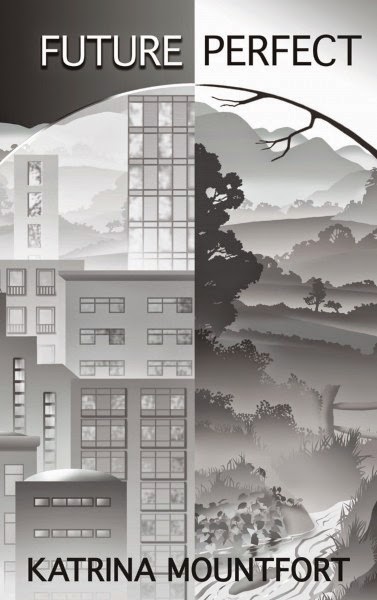 It is impossible not to compare Future Perfect to Brave New World, Aldous Huxley’s iconic dystopian novel from the 1930s. Like the latter, the government in Future Perfect has achieved a perfect society by abolishing attachment, both romantically and familiarly. Genetic material is donated and children are raised in group homes where they are taught core “Mind Values,” not unlike Brave New World. Mind Values teach people to avoid strong emotions, to strive only to tranquility, to be passive and submissive.

This is where the comparison ends. Huxley removed attachment in his novel by having the government promote promiscuity; everyone was supposed to have everyone else, thereby eliminating whatever makes a person jealous. Mountfort, on the other hand, creates a world without any friendship and love by abolishing sex. Indeed, the act is so far removed from their lives that the characters don’t even understand what it is. Instead, they refer to the mysterious act as “coupling” and regard it with disgust as beastly and beneath them. When a pair is caught coupling, they are sent to correction centers, and their resmates or co-workers quickly turn on them. To further prevent sexual desire in the community, people have been genetically engineered to be androgynous, men and women becoming more and more alike. Furthermore, Mind Values promote an ideal of Body Perfect. Feminine shapeliness is put down to being fat, and exercise is exulted into an obsession that leaves little energy for other physical needs.

Caia, the protagonist, is a young and brilliant researcher at the Ministry of Biotechnology, developing new biopolymers. Because of her talent, she was fast tracked and graduated before her seventeenth birthday. The book begins with her moving to a new Citidome, with new “resmates” and a new job. She is starting fresh in a new place with no one she knows. Caia feels inadequate and fat with her breasts and hips. She feels alienated, being younger and more thoughtful than most around her. She doesn’t enjoy the barbaric reality TV shows that everyone enjoys, and can’t relate to her Body Perfect resmates.

At her new job, she meets Mac and suddenly feels attraction. Mac isn’t just another brilliant young tech worker like herself; he rejects Body Perfect ideals and openly questions Mind Values and the government. Terrified she will be labeled a subversive thinker and sent to a correction center or thrown out of the Citidomes, she nonetheless can’t resist his charm, his friendship, his allure.

In many ways, Future Perfect is a classic love story; Caia and Mac are kept apart and must sneak, hide and pretend to maintain any kind of relationship. It is more than a little exciting to watch Caia recognize for the first time her sexuality. Even though she is in some strange future world, her experience with passion is completely relatable. Caia struggles with frustration and shame in a world where one does not just wait for marriage, but waits forever. Caia’s romantic relationship, while exciting for readers who see her discovering the best parts of humanity, serves as a catalyst for the plot. As Caia struggles to resist her passion, she becomes inquisitive, skeptical, and eventually disillusioned with the perfect life the government tries to sell.

Future Perfect is also part mystery. The government has convinced the public that life is better with Mind Values, inside Citidomes, far away from the wild and dangerous outside world. All known information in the world is stored on the Knowledge Fountain, but with Mac’s help, Caia begins to recognize flaws in the history presented to her. Definitions for strong emotions, like passion, jealousy, or joy, are circular at best, and propaganda at worst. And no information exists about the world before the disaster, when everyone moved to the Citidome. The mystery builds, as rumors swirl that some people actually survive outside the dome.

There are times when the writing feels choppy, the dialogue wooden or unrealistic. Mountfort goes to great lengths to illustrate Caia as unsure of herself at her new job and with her new resmates. She is the youngest person at her job and in her apartment, living on her own for the first time, and she doesn’t fit in with much of the cruel and callous culture that surrounds her. Yet whenever her Body Perfect resmate, a reality TV host, tries to pick on her, Caia gives the perfect response; calm, cheerful. She’s suddenly a rock, wise beyond her years.

Eventually the story becomes fluid, moving quickly through fascinating twists and turns. The characters build remarkable and compelling relationships sure to keep you reading. This brave new world is fully developed, and includes thoughtful connections between the history and technology of the readers, and those of the characters.

Government control and emotional isolation create a suspenseful atmosphere, the perfect setting for self-discovery and passion. Readers see the glory of the human condition repeating itself in a world that may never exist. But if it ever did exist, we hope, as we have to hope, that human beings would be wise enough or foolish enough to resist giving up everything that makes life worth living. Love story, mystery, and rebellion, this novel claims that human beings cannot be made better.

Future Perfect is the first book in the Blueprint Trilogy, but has a full, rich story and feels complete on its own. Many science fiction fans will have trouble putting it down, and be left waiting for next installment.
Posted by Djibril at 16:20