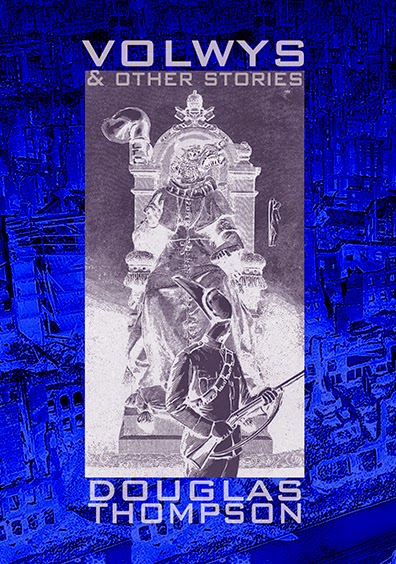 Scottish author Douglas Thompson has published his eighth volume of fiction, a collection that includes nine stories (previously published in magazines), plus a new novella. ‘Twenty Twenty,’ ‘Theonae,’ ‘Postcards from the Future,’ ‘Gravity Wave,’ and the title novella ‘Volwys’ are set in various versions of a dystopian Europe two hundred years in the future: Earth’s ecology has collapsed, and humans are reduced to savagery. In ‘Black Sun,’ ‘Multiplicity,’ and ‘Quasar Rise,’ space travelers enter black holes, experiencing time and space anomalies: characters meet multiple versions of themselves, age rapidly, or are propelled backwards in time to infancy. A steampunk story, ‘Narcissi,’ is the only humorous work. The fictions in Volwys feature cautionary ecological messages, kinky sex, time paradoxes, surrealistic images, and futuristic gadgets. At times frustrating to review because of poor execution and clunky style, Volwys nevertheless contains important subjects and original ideas.

Except for ‘Narcissi,’ Thompson’s stories lack humor. Clichés abound (“Rrio’s brow clouds in confusion”), as well as over-the-top lyricism (“Around the black hole: a corona of yellow anger like a perpetual eclipse, made Verner think … of some ruthless eye of an ancient deity scrutinizing him, hungry for sacrifice” (94). Thompson’s 23rd century characters use 21st century slang (“Anything for a fast buck”) and make frequent 21st century cultural references (e.g. Spiderman). There are heavy-handed ecological warnings: in ‘Postcards from the Future,’ a 23rd century academic sends a message 200 years into the past, recommending solar panels (“If I had to send one message to the past it would be to ask people to … build those photovoltaics … and share out the power from them globally” [74].) Though ‘Narcissi’ demonstrates that Thompson can be both stylish and funny, the anachronistic language of the other stories is grating.

In several stories, characters’ motivations are inconsistent or unclear. In ‘Theonae,’ ‘Black Sun,’ ‘Quasar Rise,’ and ‘Volwys,’ especially, I understood neither the logic behind the protagonists’ actions nor their moral natures.

‘Black Sun’ is set on Cerberus-12, a planet whose core is being drawn into a black hole. Though its settlers engage in scientific projects, their society seems oddly suburban: couples entertain, drink, and flirt. Paralyzed by deep depression since the death of his lover, Sylvia, Verner stows away in a coffin, substituting his body for that of a dead child. When the coffin is propelled into the black hole, Verner moves backwards in time, reliving his murder of Sylvia. The reader never understands Verner’s motives for killing a woman he loves: Verner seems more inclined to drink and seek female sympathy than to murder anyone. Thompson’s concern, however, is not with his protagonist’s motivation, but with time and space paradoxes within a black hole.

In ‘Theonae,’ similarly, the protagonist’s motives and moral nature are contradictory. In the story’s present, Robert, a journalist, is holed up with his wife and infant daughter in their unheated apartment, exiting daily to find food and shoot snipers. The story then backtracks to Robert’s first meeting with Theonae, a beautiful alien. As a young reporter covering a talent show, Robert first becomes aware of Theonae’s preternatural powers: Theonae telepathically forces spectators to engage in acts of sexual humiliation. Using psychic power to gain support for her “Consensus Party,” Theonae makes Great Britain into a paradise: citizens join together in mentally linked groups, and “the nations’ natural resources of food and mineral wealth were re-assigned directly to the human resources of individuals and communities” (39). Because a society based on shared goods and minds threatens American individualism, the Americans attack Great Britain and kill Theonae. Before she dies, Theonae implants an embryo in Robert’s thigh. Robert’s and Theonae’s strange child does not talk, grows at an abnormal rate, and exhibits psychokinetic powers. Because it leaves fundamental questions unanswered, the ending of ‘Thaonae’ is inconclusive and unsatisfying. Is Theonae good or evil? She is a dominatrix, humiliating her followers; yet, Theonae is willing to die to realize a society based on empathy, sharing, and consensus. What does the future hold for her rather sinister infant? Theonae promotes the ideals of empathy and need-based sharing of resources, but she is so flawed that it is hard to be sure of the story’s implied value system.

The longest, most complex, but, in my view, least successful work is the novella, ‘Volwys.’ It is told from the point of view of yet another morally ambiguous and obscurely motivated protagonist: Rrio, a 230 year-old man whose body is artificially maintained by alien technology. In the perpetual winter of an ecologically ruined Europe, only Rrio can remember the “green world.” Society is sharply divided into two groups: peasants subsist by hunting and tending hydroponic ice gardens, while Rrio and other “Esoterics” live in a climate-controlled dome, “keeping alive the knowledge of the science and technology of the collapsing world…” (206). Except for Rrio, the Esoterics are human-wolf hybrids, genetically engineered to withstand cold better than humans. The Esoterics torture a series of “Blasphemist” peasants, hoping to capture their mysterious leader Selterlyan, who preaches equality. There are long passages from “The Book of Leo,” the Bible of the Esoterics, which seem to espouse Emersonian transcendentalism. The rather static plot turns on Rrio’s true identity. An important, but frustratingly obscure point is the philosophical conflict between Blasphemists and Esoterics.

In contrast, ‘Narcissi’ is delicious fun. Though set in a vaguely nineteenth century Paris, space travelers return with alien life forms. Curio collector Raphael Gaudier purchases a “squailthronk.” from NASA. To understand his new pet, Raphael “went to his library shelves and took down his expensive and expansive leather-bound volume on the geography and climate of the alien’s home world, Narcissi-4” (52). On the book’s recommendation, Raphael feeds the squailthronk “newspapers and ripped-up pieces of leather shoes.” During nocturnal walks, the squailthronk, to Raphael’s horror, hunts and eats small dogs. Believing that he must impose “his manly will upon it,” and teach “it a good lesson,” Raphael attempts to give “the animal a damned good thrashing.” The thrashing devolves into a bizarre sexual encounter, during which the alien “began firing weird black bullets the size of marbles into [Raphael’s] chest” (56). The story ends with a classic reversal of situation: the squailthronk is now the master. Much of the humor of this delightful story comes from a setting in which space flight and Victorian manners coexist: NASA supplies Raphael with an extraterrestrial pet, and he consults “leather bound volumes” for information on extraterrestrial ecology.

While ‘Narcissi’ is a treat, neither Thompson’s black hole stories nor his eco-fictions entirely convince. Although, at least judging from the stories in Volwys, his literary craftsmanship may not be equal to his passion for sustainability, the message in Thompson’s fiction is urgently important: if we in the 21st century do not find ways to use and generate energy sustainably, the planet will indeed become a living hell.
Posted by Djibril at 16:00

Love the idea of space aliens in the same time period as Victorians consulting leather bound books of lore :)