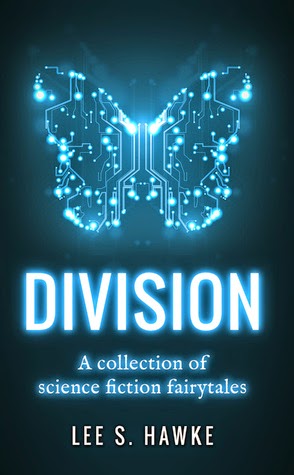 The fairy tale is a peculiar genre: today we usually think of it as quaint, storybook fodder for small children. In fact, most of the fairy tales we know best grew out of a specific body of speculative literature that developed across the seventeenth and eighteenth centuries in Europe. Like science fiction, the fairy tale form could be used to discuss and even mock the politics and social figures of the day. Lee S. Hawke’s collection of what he calls science fiction fairy tales, Division, is very much in the spirit of that old tradition, and each of the seven short stories in this slim volume shines and burns with too sharp observations of our contemporary world.

The first story, ‘The Soldier,’ seems too prescient by half. In the very near future, a sick man is taken by the military because he has survived a devastating illness; scientists believe that he, as a survivor, can be used to produce antibodies for a cure to it—and to other diseases. He becomes first a “soldier” in the effort to fight disease, and then a member of “the special forces,” assigned to fight off, if he can, Ebola, Malaria, and H5N1. His battlefield is the hospital, and his general is his doctor. As he combats sickness, he watches increasingly horrifying news reports of how the rest of the world is faring. Given last fall’s panic in America about Ebola, and the most recent spread of Measles at Disneyland, it is too easy to imagine the havoc wrought on civilization by illness, and the extreme measures taken by governments to stem the tides.

‘Dissimilation’ takes place against a smaller, yet in some ways equally bleak scale. Sara is a schoolgirl whose classes are taught through computer simulations, accessed by a memory jack at the back of her neck. Throughout the story she plugs in and out of the real world, such that the simulated world is rather more real to her than, well, the real one. However, a lonely child is still a lonely child, and bullies are still bullies even in cyberspace—as we should know all too well ourselves. ‘Please Connect’ also plays with the possibilities and excesses of our virtual worlds; in this world Richard and Susan meet for what at first appears to be an awkward experience of speed-dating. Their conversations reveal a future world upon which we are already vanguard, where everyone stays comfortably behind their computer screens for work and for games. It turns out the awkward dates are the prefatory meetings prior to government-sanctioned physical sex for procreation. While touching and human contact aren’t actually taboo, as they are in Gina Biggs’ science fiction webcomic Love Not Found, they are rare and discombobulating to the point of discomfort to the protagonists. It should be amusing that two people are so much more comfortable with a variety of computer screens than with each other, but it seems to be a world that is coming closer to us every day.

‘The Grey Wall’ is another story about isolation and a lonely child, this time in a suburbia that carries the dystopian echoes of both Ray Bradbury and Madeleine L’Engle. An unnamed boy explores the limited confines of his world, until he discovers the titular Grey Wall, and what lies beyond it. It treads rather close to a current trend in posthumanism writing in which artificial life is more human—and humane—than actual humans, but the conclusion is still unexpected and upsetting.

‘Beauty’ is a bit of an outlier in this collection, playing as it does on the somewhat worn trope of the futuristic beauty industry in which physical attributes can be changed instantly and easily. In this case, sex can be changed along with eyes, cheekbones, and various other attributes. I suppose this aspect is noteworthy compared to other, similar stories, but at the same time, it seems to me that not enough is done with the idea—especially given that in the contemporary, non-Anglo world sexual reassignment surgery is fairly commonplace. ‘Lemuria’ feels similarly worn with its premise of cursed viral media, but has enough new, intriguing elements to make up for it. This story remixes end-of-the-world fear with the consumption of social media and places it in the context of an alien invasion; the “Others” can locate humans through people watching videos of them on the Internet and devour them from within. The too-brief conclusion leaves it up to the reader whether the protagonist has ascended to the afterlife or only become part of a new hivemind. I wish more had been done with this aspect, which feels utterly new and offers quite a bit of food for thought.

The final story, ‘Division,’ is a story about a parent’s grief when her teenage daughter dies. The writing here is the sort we might talk about when we talk about the transcendence of genre—technically it doesn’t matter that the story takes place on a starship, it doesn’t matter that the grieving parents are two women, it doesn’t matter that the dead child was genetically engineered, because the focus of the story is on the emotions: of being separated from one you love deeply through death and from one you love deeply through grief. That the story nonetheless contains all of these things underlines how speculative fiction can confront the universal with all the intellectual dexterity of traditional “literary” fare.