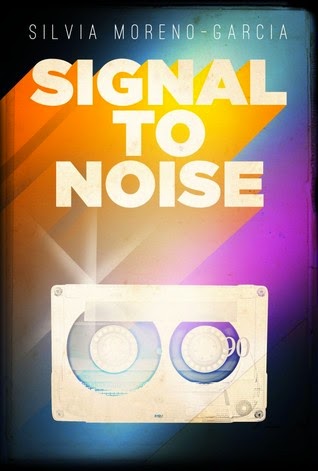 Signal to Noise by Silvia Moreno-Garcia, published by Solaris—a small press particularly keen on talent scouting—is a captivating story about friendship, music and magic, set in Mexico City. The book tells the adventures of an improbable group of friends in their teens, Meche, Sebastian and Daniela, who discover they can cast magic spells using music records, and decide to use this ability to improve their lives. Or so they think. Talented author and editor of dark-leaning speculative fiction, Moreno-Garcia has put aside (almost completely) her creepiest tones, and produced an easy to read (and like) debut novel; a pocketable time machine able to awake memories you didn’t think were still so vivid.

When I saw the blurb of this novel, I was really looking forward to reading it. Not only because I’ve always really enjoyed Moreno Garcia’s short stories (one of them published in We See a Different Frontier), but also because the idea sounded really convincing: when you start thinking about it, songs have so much in common with magic spells. Why no one had written a story about it before?!

On the other hand, I have to admit that I am a bit of an extreme test for this book, because my ignorance of US music is embarrassingly well known among my friends and acquaintances. I grew up listening to the music produced in the 80s in my own country and, believe me, you should be happy to not knowing anything about it… So, I’m afraid that many references and most of the nostalgia effect, got completely lost on me. But you can’t read Signal to Noise without blending words and music in your head. So, often, when I was reading, I actually had to stop and look up some songs online. I confess, out of curiosity, I even looked up Lucerito, the artist loved by Daniela, the shy, pink-dressed and saccharine member of the trio. I wasn’t disappointed.

Songs were often stuck in my head when I closed the book, and the tunes reminded me of the lives of the characters I had left between pages. Which was a little spell too. I got involved with the story, and the songs, to the point that I started asking people around me what was their favourite love song of all time (a question that is only apparently irrelevant to this review). Doing that, I realised that they didn’t think of a great song, but a song that meant a lot to them, which was the point Vicente Vega—Meche’s father, music geek, radio speaker and writer of the never-published compendium on Southern American rock—makes in the book. By the way, I’m not gonna say here what was, according to him, the most powerful love song ever. You have to read the book and find out by yourself.

The story has a quite classic double temporal setting that is neatly developed and very clearly managed. Part of the facts happen in the present (2009, to be precise), part happened in the same place, Mexico City, but 20 years before. The characters, as well, are the same but, as the reader finds out fairly soon, the situation and the relationships between them appear to be completely different. When Meche flies back to Mexico for her father’s funeral, she wants to have as little as possible to do with the people that belong to her past. The question is, of course, how did they get there? How did someone that used to be “sewn together” with her friend end up hating him so fiercely? The curiosity to discover and understand what happened then, what was the turning point of the story, is, maybe, the strategy the author uses to catch the reader attention at the beginning. She convinces us to look into the past of the characters to find our answers. But, when the reader gets hooked, they realise that there are many more reasons to keep reading.

When the story starts, the characters feel very familiar. Probably because we all have experienced something similar in our youth. Maybe we were the class nerds, outcasted by the cool kids, and we had to hang out with the other pariahs, even though we didn’t have anything else in common with them but being alone. Maybe we had an irresponsible father, a frustrated mother, a wise granny. Maybe we made music, or literature, or glamour magazines our comfort zone, a place where we could escape anytime life seemed too much of an unpleasant place.

Everything is so familiar that it seems slightly predictable. But then the story grows, and the three bullied kids discover they can bend reality, at least a little bit. And this makes things more complicated. Unexpected. The reader has to think again about the idea they had made, maybe too quickly, of the characters.

The author’s greatest achievement here is, in my opinion, Meche, the main protagonist. I liked Moreno-Garcia’s choice of depicting her as smart, caring and affectionate but, at the same time, bossy, possessive and manipulative. And it is not just the advent of magic in her life that makes her difficult to deal with. Meche, I suspect, would have been difficult anyway because of the strange mix of strong-mindedness and fragility that characterises her personality. She is as uneasy at 35 as she was at 15. Hard, stubborn, unforgiving. The fact that she does have that initial unpleasantness that many strong women of all ages have, or have to show, makes her impossible not to love. At least for me. Even Daniela, with her cupcakes that “taste like ass”, or Natalia with her perfect nails, in the end prove to be less simple than even Meche expected.

As in a pop-flavored version of magic realism, the (literal) awesomeness of the fantastic element contrasts sweetly and ironically with the shabbiness of the context and the everyday life problems of the three witches and wizards. The power to influence reality is in the hands of three teenagers that have skin issues and not enough money to buy snacks. But, as Grandma Dolores warns, magic comes with a price. And the temptation to take revenge against a life that seems unfair and cruel is really too sweet. The three clumsy kids are no longer half-tender, half-pathetic figures; they became potentially dangerous and come very close to crossing ethical boundaries.

I was so curious about the dynamics of the magic the three young friends learn by trial and error, that I would have liked the author to tell more about it. But, maybe, it is better that the reader’s knowledge remains as fragmentary and speculative as the characters’. Moreno-Garcia has the ability to tell a complex story in a clear and easy way. Her smooth prose makes the reading a pleasant experience. Each of the two temporal layers is interesting in its own right but is, of course, enriched by the information given in the complementary one. The few cross-overs between them, allowed by magic, are a quite elegant touch. The frequent dialogues in the narration are always believable and often amusing. Moreno-Garcia succeeds at the very difficult task of convincingly giving voice to both teenage and adult characters.

Signal to Noise is not only an interesting story, it also works perfectly as a time machine. As happens when you listen to an old song, you’re thrown back to your own youth, to your own friends and family. You see again your school, your hometown. You miss the people you’ve lost. We do find out, in a very engaging way, what happened in the past. And what didn’t happen. What the characters never said to each other, and what they almost did but, in the end, couldn’t. The most cynical readers might find the end a bit too syrupy. But it is also true that we all have at least once been not courageous enough to say or do the right thing at the right moment, and we probably still regret it. And if we can’t have a second chance, we can still be happy when the characters in books do.
Posted by Djibril at 19:15