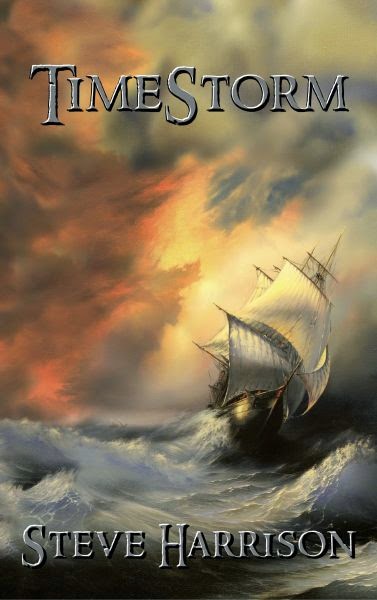 “The past is a strange country” is the sort of metaphor that has a tendency to be overused because it is often so very apt, especially in cases like time travel stories. What better way to immerse a reader than by explaining the foreign language of the commonplace, or exploring geography that was once familiar and is now exotic? Books like Diana Gabaldon’s Outlander series have become new classics for how deftly they handle the transition between old and new worlds. Steve Harrison’s new novel, TimeStorm, although it falls a little short of its premise, is an entertaining attempt at an experiment in this vein.

In 1795, Kit Blaney is First Lieutenant aboard the H.M.S. Marlin, a British ship carrying convicts to the struggling colony of New South Wales. Soon the ship is caught in a terrible storm, and when the crew regains their bearings they find they’ve been blown a thousand miles and are offshore of Sydney Harbor. This first part of the book feels like it would have made an excellent short story; particularly lovely moments include the crew being confounded by obscured, missing stars and the peculiar smell of the air in these waters. The second part of the book concerns their entry into the harbor proper; a revolt of the convicts who escape in short order as the ship sinks and burns, and the trials and travails of the crew as they seek to rendezvous after having been split up trying to get to shore.

This unwieldy half of the novel is where the story verges uncomfortably into B-grade action film, The Philadelphia Experiment writ Australian. Each chapter has a different narrator, told from the perspectives of twenty-six different characters, over a dozen of whom only appear that once. In certain sequences these chapters are very short and interlineated solely to explicate action scenes; the narrative felt more like a heavily fleshed out screenplay than a novel. A new character, Karen, is also introduced here; she’s a journalist investigating reports of armed combat in the harbor. In short order she rescues Blaney from the police solely on the basis of his good looks, explains that he has arrived in 2017 (and also explains a great deal of technology, though rather less than one would think), and sticks to his side for the remainder of the story. Their love story, such as it is, feels forced, as she admires his physicality and he admires her spunky, independent nature. The epilogue tells us through a pair of headstones that she succeeds in going back in time with him and that they are the great-grandparents of the narrator in the prologue.

Unfortunately, it’s not clear how they planned to travel back in time. Further, the math doesn’t add up for those headstones, so it’s unclear if this is set-up for a sequel or only an error. The prose itself is sufficiently uneven for the reader to guess either way. Formatting and typesetting issues in a couple of chapters also lend a feel of amateurishness to a work that is otherwise quite professional in presentation and marketing (my copy came with a bookmark advertising the novel and the press from which it came).

As I mentioned at the beginning of this review, the idea of thinking of the past as a foreign country is necessary for the reader to immerse themselves. Harrison treats the past as, by turns, barbaric (an early scene where Blaney reflects that convicts are no better than animals) or idealized (as when an elderly couple wistfully admire the perfect manners of a lost young crewman). I was left unconvinced by his descriptions of life aboard the Marlin; one of the beauties of C.S. Forester’s writing, which the book’s back matter references, was the painstaking attention to detail. Reading a Horatio Hornblower novel, one felt as if one was exploring a ship, learning where each object was kept and where each crewman worked. Harrison gestures at this, but it’s only in names, with little to differentiate the men beyond that. The convicts are all irredeemably evil, murdering and raping as soon as they get away from the British crewmen and the Australian authorities, despite a reference at the beginning that some men were being sent away for crimes little better than pranks. In short, everyone is rather less human or personalized than they could be, and more like the aforementioned denizens of B-movies. The real problem here is that the writing was so close to being great escapism that I wish just a bit more time could have been put in on cleaning up these issues, and providing a read worthy of the originality of its premise.
Posted by Djibril at 12:55