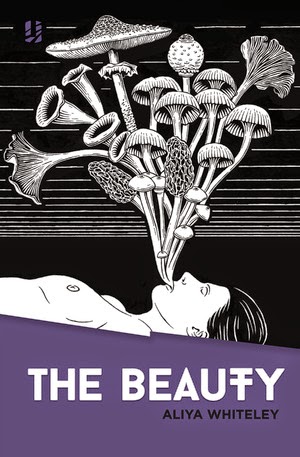 The Beauty is an elegantly told tale of a sexual apocalypse. What happens when fifty percent of humanity dies, and all of it a single gender? In this case it’s the women; the male survivors are haunted by the PTSD of watching their mothers, wives, and sisters sicken and die, and even more haunted by the question of ‘What next?’ Whiteley treats the subject, and the question, with a mythic care. Above all, this novella is not just about survival, but the uses of language—and how language and stories can help us survive, or bring us to our downfall.

The book is told through the voice of Nate, the appointed storyteller of the Group of surviving men who live in the Valley. Each night over the fire, Nate recounts the Group’s histories as stories, and none more so than the tales of the women who have passed. Nate—and we—are conscious of his use of language, couching the narrative in terms of myth, of creation story, of epic. His stories evoke every tale told in Bible School and every folk tale told at camp. And thus, when Nate breaks from self-consciously providing a neat and clean story and shifts towards the daily narrative of experience, Whiteley gives us an animal prose of the body, blood and guts and bowels, that doesn’t undermine the romanticized language of the past so much as articulate the brutal necessities that underlie reality. The Beauty encompasses the horror that accompanies beauty, and dares us to comprehend both.

Without revealing too much, The Beauty provides a counterpoint to classics like Le Guin’s The Left Hand of Darkness, or newer books like Gardner’s Commitment Hour. If humanity is given the choice to change or to die, and the answer hinges on sex, what would likely really happen? TFF readers will be provoked by Whiteley’s descriptions of Nate’s world and how we can read them against our experiences of today. Homosexuality is touched on briefly; Nate takes it for granted that the younger men would naturally turn to one another for physical and emotional love—and just as for granted that his elders would spurn it, or despise it, or ignore it altogether. Later on, there are scenes of young men who affect the dresses of their dead women, as they themselves are effectively becoming women (of a sort). And Whiteley sadly demonstrates that even if there is only one sex, misogyny (also of a sort) will still survive. But at the same time, the treatment of the topic seems only skin-deep: if one’s choice of sexual partners is either same sex or no sex, or if the affectation of gender is indicated by clothing as an analog to mutated biology, then sexuality becomes concrete. Numerous scientific studies have shown that sexuality itself is hardly concrete at all, and cultural negotiations of it are more fluid still.

The emphases on gender and language make it easy to overlook some of the story’s other weaknesses. The default male is white, and able; there are only the most nominal differences between “young” and “old” as presented. That the story takes place in a low-tech rural environment makes it easy to be read as a kind of fairy tale, always next door to a magical green world. And yet—there are still cities in The Beauty. And “boats and aeroplanes, we see them; but there is no new place to go any more, no escape to be made on little shiny wheels.” Change is promised through the end of the book—and yet, how can we know it’s a genuine change in a world that is otherwise so cut off? (This is the same way that I felt at the end of Divergent, with the two teens fleeing dystopian Chicago: the slight hope that the characters will become part of a larger world that makes more sense than the barely functioning microcosm we have been presented with up to this point.) We might also wonder about the likelihood of this green world when we are beset everyday with warnings of climate change and water wars. Aside from that minor detail of imminent extinction, life in Whiteley’s world seems rather idyllic. And yet, this presentation as a kind of fairy or folk tale is what makes the rest of the book so successful.

It is after this firmly near future world has been set up so cozily that it descends into something closer to horror. Questions of sexuality aside, what is more horrifying than having one’s body repurposed by society? This is an aspect that all too many women readers, especially in America, will recognize immediately, haunted as we are by new legislation proposed every other month regarding our health and birth control options. I will be blunt though, and say that several of the scenes of body horror in The Beauty are visceral and nausea-inducing. If you trigger for that sort of thing, then take note, for this will be a bumpy ride. But the scenes are never gratuitous; they are definitely required by the story, and the emotions that Whiteley clearly wants to evoke.

The Beauty is a short, quick read; I finished it in a single sitting. But it’s still the sort of book that sticks with you, that makes you want to press it upon your friends so you can have a long argument on a cold night—perhaps over a fire. It’s a difficult book, and a thoughtful book, and one that—if you have any interest whatsoever in the intersections of gender and queerness in SF—you will want to pick up.
Posted by Djibril at 16:52