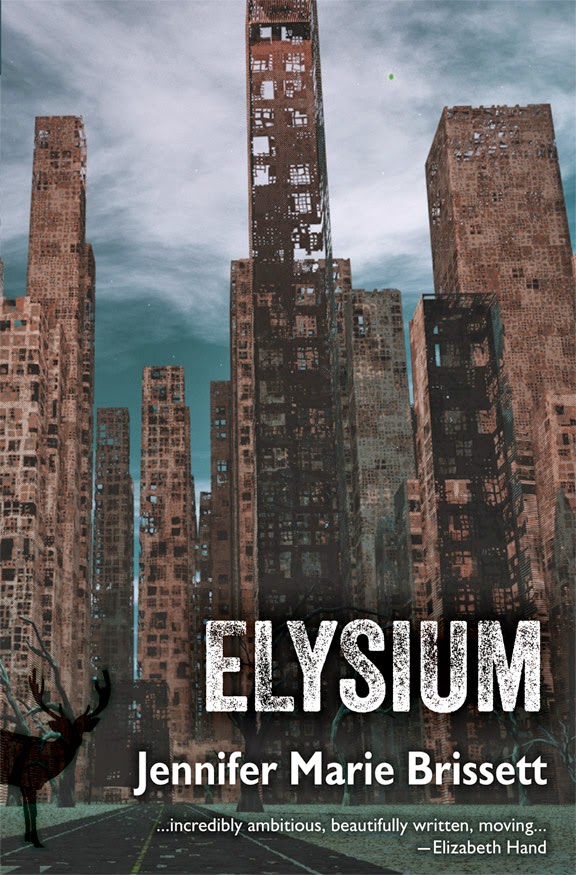 Elysium is the sort of novel you read once, and then read again to make sure what you think happened was, in fact, what happened. This is a complex, dense book, and reminds me of the best parts of Kate Atkinson’s Life After Life and David Mitchell’s Cloud Atlas. Brissett’s novel, her first, is as ambitious and experimental as those works, and I hope it receives similar attention. As the reader perhaps knows, Elysium is the ancient Greek equivalent of Paradise, reserved for righteous heroes. Usually discussions of Paradise prompt one to ask, “How does one get there?” Rather more interestingly, Brissett asks a different question altogether: “How does it function?”

The book unfolds through a series of vignettes, each of which is in some way connected to the previous one. Beginning with an innocuous accident set in contemporary America, we travel to the near future, the far future, a place that may or may not be a mythic past, and several post-apocalyptic stops in between. We have two protagonists, Adrianne and Antoine, who are also sometimes Adrian and Antoinette. In some scenarios they are lovers (shifting in both gender and orientation), in others family members. In this respect the narrative might remind readers of Joanna Russ’s The Female Man or, with regards to the continuing lives of our heroes, Kim Stanley Robinson’s The Years of Rice and Salt. As if this wasn’t enough, intermittently the story is interrupted by bits of computer code, signalling—as if it wasn’t already obvious—that we are reading something far different from a standard narrative, however much it might play with temporality. All is revealed in the final chapters, which is what really made me want to go back and reread to see if the story still works once all of the puzzle pieces have been fit back together again (it does).

Adrian/ne and Antoin/ette, and their friend/lover/protector, Hector/Helen, are utterly believable in each of their incarnations. Too often stories of love tend to revert to a naive simplicity, with a choice between stagnation or consuming passion. Here the characters feel both of those things, in addition to a wide spectrum of other, often conflicting emotions. In one sequence, Adrian cheats on Antoine while the latter is dying of cancer. It’s a brutal sequence because every emotion feels utterly real and empathetic to the reader, inviting a complicity to what we would most likely, as a matter of course, consider a despicable and cowardly act. And yet, as written, we completely understand and empathize with the complete mess that romantic love often is—and which it so seldomly is genuinely portrayed as. The other forms of love depicted here—between siblings, between parents, and between parents and children—are equally complex if less directly inflammatory.

Questions of gender and race aren’t fully investigated here, though some minor plot points seem to mock mainstream expectations. For example, in a brief scene in one of the post-apocalyptic sequences it is revealed that humans with more melanin were better equipped to survive the new world than those with less melanin. If the reader hadn’t thought about the racial make-up of humanity in the end, then the ugly epithets used by the dying on the survivors rather handily makes the point. The sometimes queerness of Adrian/ne and Antoin/ette is similarly understated. Those scenes seem to have less of a political bent and more of a matter of factness to them. In the thousands of possible scenarios that can be visited, the odds favor genderbent and queer love as much as they do heterosexual love. And yet, if we consider that Brissett is indeed asking about the make-up of Paradise, the irrefutable presence of POCs and queer characters succinctly underlines the norms of her world.

Perhaps above all the question that Elysium prompts us to ask is what constitutes immortality and memory. The ancient Greeks of course believed in great deeds and songs of glory; we moderns tend to cast our heroic narratives on a worldwide (if not interstellar) scale. What the book may lack in philosophical meditation it makes up for in emotional resonance: every character Brissett draws is, in one way or another, an emotional survivor—and a visceral one at that. The feeling of loss pervades the novel, reminding us that sometimes it’s not enough to survive, that living requires more than that in ways that only the best writers and thinkers—and stories—can describe.
Posted by Djibril at 16:07

A thoughtful review of what sounds like an amazing book. I can't wait to read it!

I've just seen that this lovely book has been shortlisted for the 2014 Philip K. Dick Award. Congratulations, and good luck!