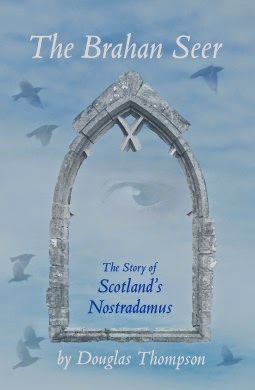 Sandwiched between Events of Note: the euphoria of the Commonwealth Games and the political wind-up to the Scottish independence vote, here comes a simple and humble tale of a minor Scots prophet. Subject to lurid visions of frightening colour and intensity, Coinneach Odhar is credited, in such tales as still exist, with foreseeing major events up to and even beyond WWII—four hundred years in his future. This subject is ladled in myth and legend. Remaining sources are themselves suspect writings: more amazement than actuality. However, this is not a Scot driving his people to independence; this is no angry, bloody warlord. Indeed, he is a simple peasant, and Thompson’s angle is of a man a victim to his visions. Saved by a blinding flash of insight from a nasty case of poisoning when just a lad, the seer’s life is informed with these demanding, effortful mental experiences that break through an otherwise unremarkable labouring life. Transposed by a gathering number of amazed followers, he becomes a wandering prophet, drawing crowds of amazed villagers at each place he lands up. However, a compulsion to truth, which cost his mother her life, leads him to an inevitable, terrible end.

Since this is at the hands of a jealous landed lady, and the seer is a labouring class of man, one could find an argument for the eventual repression of peasant populace by the ruling elite, but Thompson has not made this political at all. All events are personal, a direct result of actions taken or not taken. Causality is the ultimate arbiter of human fate. We change it or not through understanding; the less understanding, the more likely the results will be fatal. And understanding is through words, communication. For a narrative philosophy, it is remarkably pragmatic at heart, for all the potential to spill over into highfalutin discussions of semantic and linguistic ‘truth.’ This is how Thompson sees his seer: from a world of basic humanity: he lived, he spoke, he was a man who died; we are invited by this new re-telling to make what we can of the meaning of it all.

Written in a semi-dream-like style, the practical aspect of the seer’s life—birth, youth, early visions, wandering in the wilderness, eventual mobile prophet-hood and martyrdom smack strongly of the Christian narrative. But this trope is questioned: this is a seer with Pagan roots (although always professing his Christian faith); fathered by an advocate of the ancient ways, he uses a carved stone from that practitioner’s effects to focus his visions. So can a more general meaning be read? How compelling is this journey of the innocent, decent man, a man who forswears physical passion, driven on by a higher power? It is the archetype of a quest, specifically, the visionary’s quest. And archetypes have perhaps the greatest power of all, as they form the roots of many variants of social story. The jumps, too, from boy to working man to wandering visionary are allowed for in this tropic archetype. This story is written to feel old and handed-down; with its slightly odd shifts in time (the dates are a little out of kilter—the seer is up and practising his wanderings before he has started them at one point), the effect is like an epic poetical recitation of a life of a saint. It comes and goes, like the highland landscapes under mists and rain.

What fragmentary evidence still exists has been woven into an interesting tale that comes across as half historical chronicle and half magical realism. It’s light and easy to read, with a beguiling simplicity, but this is deceptive; by the end you feel as if you have actually walked a while in the characters’ shoes, and, perhaps more crucially, that you have learned something. How much we manage to learn from myth, and from creative additions to legend, is a debate for historical philosophers. Because while stone-cold facts fade over time, stories—the method by which truisms, major remembered events and folk heroics are kept in mind—last and last. And do so through the very standard tropes and archetypes that could be accused of simplifying and thus eroding the truth of any event or person.

Yet this seer is arresting. His story is persuasive. And how it is told also tells us how each successive era wants to see him, and how it wants to remember him and what he did (or did not do). Stories have tremendous, insidious power; they latch onto our psyches and hold on, in half-recalled impressions and fragments that influence us at an intimate, psychological level. Words and their power are what this story is about: the power to warn, to amaze, to elevate and to finally destroy. The seer told tales of a future he saw. We tell equally fascinating stories of the past we peer back to.

We are locked in that relationship with our primary form of communication: words give meaning to what is experienced, and people—the sum of experiences—give meaning to words. The seer communicated in an oral tradition—words spoken live to a mass gathering. His followers later gathered as much as could be remembered into fragments; adding touches, no doubt, of wordy flourish to ennoble their prophet somewhat. The story is about words. Struck silent, and the prophet would have no tale and he would be the lost, wordless savage living in the cave on the mountain with his ancient, forgotten ‘magiks’.

My overriding impression was of having learned, that having read the author’s words I now had a new understanding of a subject. I feasted on words, and they were interesting. Like a pamphlet at a historical site, this novel informs, yet plays around the more unknown boundaries of its subject. A book for historical interests, it is too straight down the line to be purely magical fiction. Coinneach, through the words of his biographer-author, insists on the dignity of an actual space in time and mind. While the Great Events of Our Time unwind about us, the path of the seer’s remembrance into the twenty-first century, and the power of that remembrance shows us that even the smaller are recalled, through the power of story, and not lost under the marching feet of Progress and History.
Posted by Djibril at 11:43