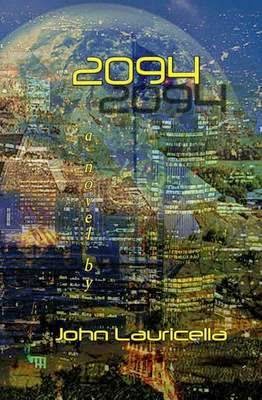 This self-published novel is a none-too-subtle pastiche of 1984, also riddled with internal references to Brave New World and other classic dystopias. Featuring a prodigious cast of characters and range of subplots, some of which impact directly on the core story, others contribute to the tone and themes on through flavor and imagery, and some apparently neither. Set less than one hundred years in our own future, the world has become a labor-free, immortal utopia—for the very few. And at a great cost. Although the novel contains patchy writing and characterization, and sometimes unconscionable stereotyping, it is an ambitious vision from a promising new writer who will no doubt continue to produce interesting work.

The protagonist, in as much as there is one central character in this sprawling novel, is J Melmoth (his name another literary intertext), immortal, happy, healthy, living with perfect leisure and on-tap gratuitous sex from the sex-bots both he and his cardboard-cut-out grumpy wife Raquel rely on for intimacy. The networked chip in his brain provides Melmoth with ubiquitous access to information and entertainment, and free pleasure-credits, but also monitors his whereabouts and activity to a faceless, controlling government. Neither especially moral, nor noticeably bright, Melmoth begins to notice differences between official media and his own memory of history and literature, and at the same time the sex-bot he has programmed to serve his puerile fantasies begins to malfunction on him. His storyline more or less echoes that of Smith in 1984, except that his “rebellion” is milder, would never have had any effect but to open his own mind, and is repressed not by a brutal secret police, but by the whimsical, random decision of a government “Initiate” who accidentally comes upon it.

Meanwhile, in what ought to be a much more serious rebellion against the repressions of the off-world government, a group of off-grid guerrilla fighters in the wilderness of an apparently desolate Mexico, led by Miguel Jimenez, discover their families have been kidnapped into slavery and set out to rescue them. Via a circuitous route, and guided by a sycophantic, treacherous, cringing caricature by the name of “Omar the Turk”, they cross desert and mountains in search of hidden Aztec gold. Occasionally encountering android soldiers, magical Indians or unscrupulous townspeople, their mission comes full circle before it completes. As characters the five Mexican fighters are indistinguishable from one another, or indeed from the stereotypical Mexicans of any golden-age Hollywood western; their motivations merge and mutate whenever the plot requires them to.

The most baffling subplot of all is that of “Ibn al Mohammed”, archetypal Noble Savage, and jihadist inmate of Guantanamo Bay prison camp. “IoM”’s role in the story seems to be to resist with great virtue the inexplicable attempts of his sex-bot prison guards to seduce him with pornographic writhing and lesbian displays, and to philosophize about jihad, love of God, and silent resistance being his only means of combating Satan.

Finally, we are introduced to Templar Bronze, one of apparently only three inhabitants of the great hexagonal bases in orbit around Mars, along with her colleagues Paladin Silver and Roscoe Gold. Bronze’s role is the development of a vine-growing environment on the Mars platforms so that wine can be made rather expensively imported from Earth. She appears to be moral and kind, of genius-level intelligence, and genetically engineered to physical perfection; she is regularly described as “beautiful”, “perfect”, “Amazon-like” etc. (Although her health is physique are guaranteed by her expensive genes, at one point in the company of her boss, the director and apparent ruler of the world, Gold, she declines to eat a second gluttonous cake because she is “watching her figure”.) Paladin Silver is an aggressive and cocky space pilot who occasionally visits Earth to kidnap Mexicans to slave in the Martian vineyards or gold mines. Roscoe Gold, the Director, sits in his office, served a variety of expensive sweets by servile robots, and plots the terraforming of Mars for no one’s benefit but his own, while occasionally ranting insanely about divine privilege, human morality, or alien visitors.

If the above summary sounds somewhat confused, that’s because the book really is. There is a coherent plot, at least for some of the characters, and the philosophy is pure dystopian bleakness and nihilism out of Orwell on a bad day. There were too many problems with characterization, especially the one-dimensional stereotypes that are all the non-Anglo personages, for me to unreservedly recommend this novel. But nor is it irredeemably bad; it just reads like the second novel-length draft written by a talented but novice author who isn’t quite ready for professional publication yet. The ideas, spirit, imagination and sheer hard work that went into this book are impressive, and the flaws aren’t able to hide them completely.
Posted by Djibril at 12:22