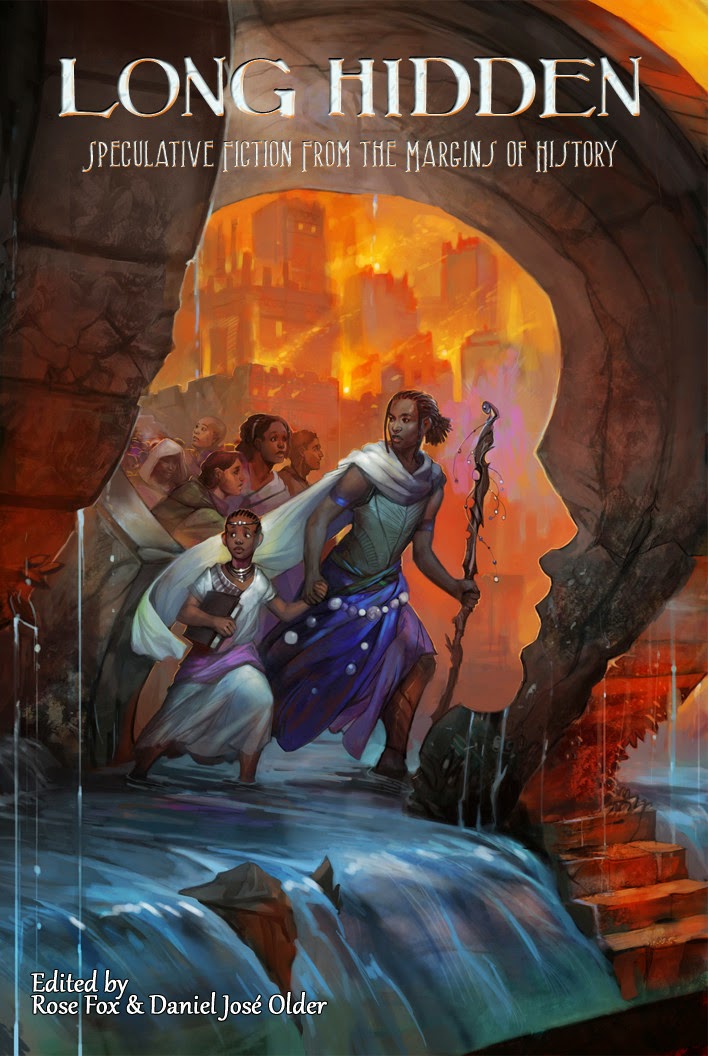 I was incredibly excited to read Long Hidden: Speculative Fiction from the Margins of History. I first heard about it over a year ago, during its wildly successful Kickstarter campaign. I loved everything about the project: the editors (Rose Fox and Daniel José Older), the publisher (Crossed Genres), the authors that had been invited to submit (far too many to name). Most of all, I loved the raison d’être of the anthology: resisting the erasure of marginalized people, both from history and from speculative fiction.

Though I suspected I’d love Long Hidden, I tried to retain at least scraps of my objectivity. After all, I’d been burned before, many times, by promises of diversity and progressive idealism. Too many creators conflate diversity with bland post-racial colorblindness. Conflicts and structures of power exist in these stories, but they happen in some distant reality that’s divorced from the struggles that exist in many people’s day-to-day lives. Moreover, when there are resistances or rebellions, they are centered on singular heroes that are almost, to a fault, white and cis-gendered. While we are starting to have more women rebels in speculative media and literature, I’ve never seen a depiction of a Latina trans woman leading a riot against a violent oppressive force. Can you imagine the backlash against such a heroine? Trying to write this character would incite its own riot, with the gatekeepers of genre fiction protesting and circulating petitions under the rallying cry of, “Political correctness gone mad!”

And yet in history, there are people like Sylvia Rivera, veteran of the Stonewall Riots. At eighteen, she was throwing bottles at the police, and a year later she was arrested for attempting to scale City Hall in a dress and heels to crash a closed meeting on gay rights. For the rest of her life, she worked for the rights of people that were marginalized by the mainstream “gay rights” movement. Nor is it correct to think that Sylvia Rivera was an exceptional person (though she was, by all accounts, an extraordinary woman).

Between Long Hidden’s covers, we hear the stories of runaway slaves in the antebellum south, a 17th century musician during the Manchu conquest of China, a Filipina child during the Philippine-American War, black cattle drivers with a Gorgon’s hair, returned WWI vets that happen to be werewolves or vampires, and undead Hungarian soldiers from a failed peasant uprising.

This book’s existence proves a couple things: that there are both writers and consumers for a book with a message of resistance and social justice, and that such a project can be an absolute joy to read. Long Hidden is, in fact, one of the strongest speculative fiction anthologies I’ve read.

There are a number of authors whose work in this anthology would have convinced me to read it: Ken Liu, Tananarive Due, Sofia Samatar, Sunny Moraine, Nnedi Okorafor, to name a few. Samatar’s story “Ogres of Eastern Africa” begins the anthology, and it’s an excellent meditation on actually writing from the margins. It’s narrated by the Pakistani assistant of a European big game hunter in Kenya. “Having shot every type of animal in the Protectorate, he is now determined to try his hand at ogre. I will be required to record his kills, as I keep track of all his accounts.” Alibhai writes this and other observations literally in the margins of a catalogue of ogres that his employer has commissioned. “There is a strange pleasure in this writing and not-writing, these letters that hang between revelation and oblivion. If my employer discovered these notes, he would call them impudence, cunning, a trick.” There’s a lovely restraint and formality to Samatar’s writing; worlds within the story are hinted at, move in your periphery, but never pull your attention away from the narrative.

Sunny Moraine’s “Across the Seam” resonated with me the most. Iwan is a sixteen year old coal miner, an orphaned immigrant from Austria-Hungary. He carries secrets with him: Baba Yaga comes to him in his dreams, he sees her chicken-legged house on the streets of Lattimer, Pennsylvania, and she calls him Iwanka, dochka, daughter. “He looks at the dresses of the boarding house’s proprietress, her neatly coiffed hair under her scarf, her hands—somehow both rough and delicate—and feels a yearning that has nothing to do with wanting her the way a man should want a woman. He knows that he’s broken.”

Moraine blends labor history, Slavic folklore, and gender identity seamlessly and with huge compassion for their characters. They have a knack for imagery and subtle metaphor. At a company scrip store, Iwan gazes at a pair of ladies’ white gloves:


He imagines sliding his hands into them, the hair on his knuckles and the callouses on his palms and the black dust packed under his fingernails hidden by that elegant white. They would make his fingers look slender, he knows. Delicate. Before he turns away he reaches out and runs a fingertip along their backs.


Moraine’s story doesn’t exactly have a happy ending: it takes place during the Lattimer Massacre, so you can guess that Iwanka doesn’t ride off into a sunset. History is full of tragedies and shallow graves, after all. But “Across the Seam,” like many of the stories in this volume, has a curious relationship with death. It can be another form of resistance, though often a double-edged one.

In Thoraiya Dyer’s “The Oud”, grief powers a Druze musician’s magic, first for protection, then for vengeance. In “Collected Likenesses” by Jamey Hatley, a young woman uses effigies to avenge the wrongs done to her grandmother when she was a slave. In Ken Liu’s “Knotting Grass, Holding Wing,” a songstress named Green Siskin manipulates the Manchu soldiers that have captured her city, saving a number of people from death, even those who denigrate her for her profession and call her a whore.

In the end, her actions don’t save her own life, but her death becomes transformative: when Green Siskin’s friend tries to find her body, they can only find the clearing where she was killed, which has been filled with songbirds.

Death as a transformation; death as part of a ritual; death as part of life, an inevitability in the cycle of creation and destruction. The last story of the anthology, “Dance of the White Demons” by Sabrina Vourvoulias, takes place in Guatemala during the Spanish conquest. It follows two young people, the prince Umám and an albino witch who helps him fight the Spanish conquistadors. Despite their magic, despite their hopes, they lose; the conquistadors, as they did in history, overwhelm the resisting forces, enslave entire nations, and change the world.

The witch’s mentor, an old woman, tells her:


“Tekún Umám had become your friend, so you danced your dance of the white demons for him. And with him. And because of him,” she says. “But he is not our last hero. The dance cannot end with his life … Hundreds of years from now, the white demons will dance again. For women heroes this time. Tenacious ones who discover ossuaries full of bones and the stories that can be read in the remains of bodies. Courageous ones who speak aloud the forbidden history. Righteous ones who will not flinch when calling for justice.


There are stories in the volume that aren’t quite as strong as the others. “Ffydd (Faith)” by S. Lynn wavers between a character study and a narrative story, but doesn’t quite fall into either strongly enough to satisfy. The title character of “Angela and the Scar” by Michael Janairo, a young child who has befriended a kapfre, a trickster spirit of the forest, is a little too precious and precocious. And “A Score of Roses” by Troy Wiggins follows a relationship over the span of several years, but its scope is a little too wide for a few thousand words.

In Long Hidden’s introduction, Fox and Older write, “Too many … supposedly diverse stories had generic faux-multicultural casts where everyone sounded the same. Our lives and personalities and voices were shaped by our cultures, our ancestry, and the history of people like us. We wanted more speculative works that reflected those truths.”

It is not enough to be a silent face in the melting pot or multicultural salad bowl or whatever metaphor is currently in vogue. Representation in others’ stories is not enough. History is full of people who were not white, not men, not Christian, not middle- or upper-class, not straight or married to the opposite sex. And yet, it is difficult to find those people in most history books. Who is fit to be a hero? Whose stories deserve to be heard? Who deserves to be remembered, years and decades and centuries after they lived?

Everyone’s. That’s the answer that Long Hidden provides, initially in its introduction: “Only an anthology, a book that encompassed many voices, could speak to both the vastness and the underlying unity of our need for fiction that reflects all people and makes room for everyone to be a hero.”
Posted by Djibril at 16:07