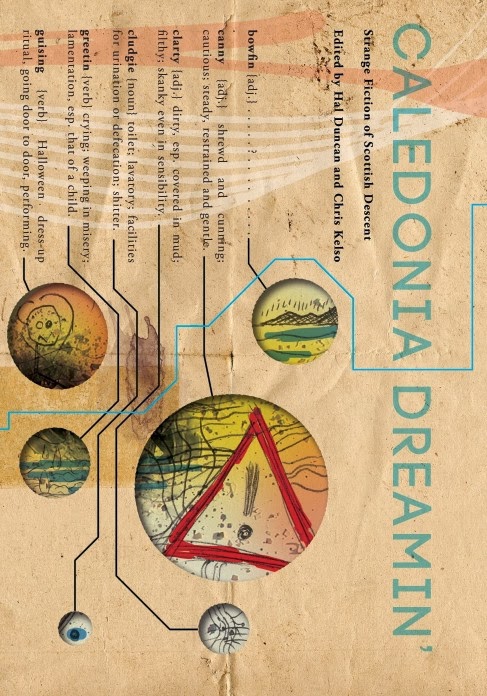 The anthology, edited by Hal Duncan and Chris Kelso and published by Eibonvale Press in December 2013, is a well-crafted collection of seventeen stories that all have been written on the basis of a single Scottish word. The Scottish language and culture is the dominant frame of this book, but it has a broad range of themes and plots and travel across all the speculative genres. The characters in these stories deal with issues like a sudden urge to bathe in the muddy water, the complaining dead mother, the hungry newborn child, the yearning for knowledge, the fear of turning into an animal, a longing for the homeland, or not wanting to go home but to keep wandering. These tales are weird, terrifying, dark, beautiful, disturbing and funny. It was quite a thought-provoking read. Some of these stories are amongst the best stories I have read for quite a while and I recommend the book for not only the lovers of Scotland, the Scots language or linguistics in general, but for all fans of the weird and unexplainable, or people who enjoys plain good writing.

Several of the stories herein are excellent apocalyptic stories, amongst them ‘Newayr’ by Douglas Thompson. Thompson writes a story about the meeting between the young girl Cathy who’s never left her village and officer Grayling. Grayling arrives to the village like an angel from the sky and wants Cathy to interview the eldest in the village about their memories from the night they were evacuated from The Glow long time ago. Slowly Cathy realizes that the world isn’t what she was raised to think, and that Grayling is no angel at all. Thompson weaves the readers into this dark world, where mankind play gods and think they can create worlds. I liked this piece.

Another great story in my opinion is Wendy Muzlanova’s ‘Maw’. This story is written entirely in Scots dialect and it took me some time to get behind the language and into the narrative. This heartbreaking story is told from the voice of poor Maw, who finds herself pregnant after close encounter with a biker, and who then gives birth to a baby creature in the lavatories at the back of the shopping centre. It’s hungry and Maw nurses it the best she can, but its appetite is enormous. Maw gets thinner and weaker every day. She tells us her story with stark black humour and bitterness, but there’s an undertone to her insisting voice that makes you sad. Muzlanova is a great storyteller and creates a brooding and disturbing atmosphere that grows in strength throughout the story. This was a good read.

The story ‘Widows in the World’ by Gavin Grant was another story that left me speechless. One of the longest stories in the anthology, this is a fascinating story about the Granny, her moving house and its inhabitants: the husband, the wives, the children and the dead mother. It took me some time to accept the weird frames of this apocalyptic world. But when I finally did, I was hooked. Grant writes convincingly about the Granny and her observations of the world, her pregnancy and her quest to get rid of her complaining dead mother. Grant has a sure authorial voice in this story, and puts in small details that leave you pondering, like this lovely passage: “The plastic surgeons smoothed out her mother’s navel in an afternoon. Her mother had asked the Granny if she’d like hers removed, too, but the Granny had signed her refusal. How could she explain the depths of her infantile sorrow to see the link between the generations removed, denied?” I really liked this story.

I also thought the stories by Neil Williamson, Brian Milton, T.J. Berg and Gio Clairval were exceptionally entertaining and well written. Williamson writes bitter-sweetly about Sheena, who doesn’t feel entirely at home in the South, and who tries to date again, to find the right music, the right tone. Milton writes a creepy tale about Dave, who after swimming in muddy bog water, has nightmares and strangely needs to roll himself in earth and dirt. Berg writes the stunning tale about the miner who goes digging through the giant’s skull and deep into the earth, after his Lady girlfriend who went looking for knowledge. Clairval writes compellingly about a young teenage girl who takes drugs together with her boyfriend and their friend, but suddenly things develop in a wrong direction and she discovers that she’s changing.

I feel that some of the stories in this anthology are clearly stronger than others, but all in all, the anthology has many lovely stories and the stories I have not mentioned here are all good reads. I’m stunned at the variation in plots and the generally excellent language.

I also must confess that it took me an exceptionally long time to read and review this book. This has puzzled me some. At first I thought the language was mainly to blame. ‘Glaikit’, ‘mockit’, ‘droukit’, ‘drouthy’, ‘couthy’, ‘scunner’, ‘thrawn’. Or ‘this is howfur ye pray tae yer god.’ As a non-native English speaker who still struggles with understanding all of the English words, I must admit that the words and expressions of the Scottish language have been difficult to approach and understand. Much of the dialogue in many stories is Scottish, and a few of the stories are written entirely in Scots. So the language was a barrier. Eventually I discovered that reading the Scots words aloud helped. And I guess this is exactly what the editors wanted: that the readers should spend the extra time to ponder and get to know the richness of the Scottish language.

When I read an anthology for a review, I always keep a notebook close by so I can write down my immediate thoughts after reading each story. When I’d read all the stories in Caledonia Dreamin’ and I started looking through my notes, I had to smile. Two words popped up almost on every story: ‘weird’ and ‘strange’. Sometimes with an exclamation mark put behind. On one story I even had two and the word ‘wow’ added. Now you might think I should vary my notes a little, and I assure you that I usually do. The reason why I tell you about this tiny detail, is because I feel ‘the weird’ is the core of the book, the book’s identity.

Caledonia Dreamin’ takes you on an odd and different travel. It isn’t any easy charter travel where the tanned guide meets you at the airport with a flashing smile, holding the hotel card high in the air so you will get on the correct bus to the correct hotel with the correct drinks waiting at the table in your correct hotel room, and not end up at the (identically looking) neighbour hotel or in some obscure mountain village. No, this anthology is an almost dreamlike travel through the otherworldly fog on the Scottish moor and the sharp mountains, where moss covers the skeletons of giants and scary things with sharp teeth that rip your flesh off, to the traditional pub or the snobby suburban houses. And even though some stories don’t take place in Scotland at all, maybe not even in this world, and some take place in the future, and even several centuries back, it doesn’t matter. You’ll feel as if you’ve been given a glimpse of a culture, something you need to pay a new visit to, and maybe another after that.

It’s almost as if there’s a pulse throbbing through all the stories that insists you follow along with the beat. The book looks the readers straight in the eyes, demands attention and triggers reactions in a range from sadness, through nausea, to laughter. I’m not sure I’m able to fully communicate here what I’m left with after reading this book. I think this is the kind of book that will give individual reading experiences based on the reader’s preferences. I come from Norway and Iceland, countries whose climate, history and folklore share several bonds with Scotland. Maybe that’s why I was touched by this book.

There is a sincere voice throughout Caledonia Dreamin’, either the characters speak directly to you or whisper to you as if from the corner of a bizarre dream. In hindsight I think that this is the main reason why I spent such a long time reading this book. It’s such a challenging voice, difficult to not be moved or troubled by. And I can’t help but wonder if it’s the Scottish language that creates this feeling of the sincere and true voice. The editors have done a fine job creating this flow and expression.

This is indeed Caledonia dreaming, glimpses of a Scottish identity and culture, which the editors allow the readers glimpses of. The authors in this book are not all Scottish, but they have managed to communicate an atmosphere and good stories that make you crave more. All in all, I found this collection worthwhile reading, well written and entertaining for readers who don’t shy away from weird stories and weird language.
Posted by Djibril at 13:43

This review leaves me very much wanting to read the book. The emphasis on the weird and on the language intrigue me. Nice touch to include a bit about the process of reviewing this book.

Thank you, Chris! It was a good read. Think there are stories for everyone here. Happy you liked it. Thank you for reading and commenting.

Thank you so much! Your review made my day :-)

You're welcome. Thank you for writing such a lovely and strong story :-)