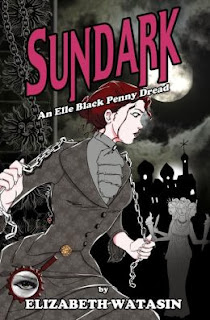 Contributing to a proud tradition of self-published steampunk serials that are simultaneously genre-bending and hark back to the most staid media of the Victorian period, Sundark is an odd little novel that manages to be charming and unsettling in equal measure. Watasin herself evokes the "penny dread[ful]", the cheap, short, popular and disposable stories that helped bring literature down from its preserve of the moneyed and educated classes to a wider audience. An odd mix of progressive and traditional elements, both stylistically and ethically speaking, and an uneven, sometimes predictable plot, means I can't unequivocally praise this book. Engaging characters and some lovely scene-setting do make this an enjoyable read, however, and the author's prolific output promises much more of the same to follow.

Although this is a steampunk story with lesbian characters, strong paranormal elements and pagan spiritualism themes, the classic genre in which it situates itself is the Victorian detective novel, with open scenes echoing Conan Doyle's famous genius consulting detective Sherlock Holmes.The setting is familiar: a creepy hotel from which guests are disappearing. Of course, rather than the rational investigator being the only one who doesn't believe the supernatural is involved, in this case it is Mrs Black, the psychic and telekinetic detective who has to debunk the other characters' overly rationalising hypotheses. For a detective novel, this is somewhat problematic, since a plot that revolves around solving a crime relies on clues, science and deduction, and encourages the reader to compete with the investigator to solve the crime, whereas a paranormal setting allows for developments and twists that break the rules, that are so arcane and mysterious, and based on in-world beliefs that a reader doesn't really have the same potential to solve the mystery. The occult detective story is a venerable genre, don't get me wrong, but it plays with a somewhat different set of motifs than the Victorian genre.

Without the scientific crime-solving game to play, therefore, this story has to carry the reader through characters, settings, adventure and wonder, and its success in these areas is mixed. Mrs Black, the protagonist, is a charming and engaging enough character, a psychic and "remote influencer", widowed, formerly institutionalized for a mental breakdown, and now in a lesbian marriage, she is confident and strong and cheerful, but sometimes giggles or blushes for reasons that are mysterious (to this reader, at least), and seem more childish than her character otherwise suggests. We sympathize with and enjoy Mrs Black's company, but the real star of this story is the hotel, Sundark House, a mechanical wonder whose builders and former owners were a magician and escapologist who filled his home with machines and moving parts to change its appearance daily, and his spiritualist and Pagan wife who observed and communed with the heavens through the mystically located towers and observation rooms. The haunting of the house is genuinely creepy at times, with ghosts and visions and screams and dimensional portals, although Mrs Black's ability to defend herself from these spectres is never really in doubt. As in all crime fiction, not all of the nefarious events surround Sundark House can be blamed on a single perpetrator, so a bit of a tangled web of crimes and criminals emerges, leading to red herrings and false starts. There were some predictable moments: the identity of the first victim; the reason for one character's refusal to remove his hat; the identity of the power possessing the house—and these were as often for narrative as for in-world reasons.

This mix of the speculative and the traditional is reflected by the odd bland of progressive and conservative in the book itself. The protagonist is in a lesbian marriage; one of the central characters is a woman of color, another is a disabled—but not helpless—man. There is an element of alternative history here, of course, as there is in all steampunk, but Mrs Black's marriage to her wife (Mrs White-Black) is not normalized in the text; people may not judge or attack them for their relationship, but they do raise eyebrows, and one well-meaning character warns against showing affection in public. Perhaps this is not meant to be revisionist history at all, since Watasin cites precedent for legal marriage contracts between women in the Nineteenth Century. Likewise the one Caribbean character plays a powerful and positive role, but her Jamaican accent is horribly handled, and responded to patronizingly by Mrs Black. The disability theme is somewhat better handled, or at least it is so far in the background that I found no cause to be offended by it. The truly revisionist nature of the world is revealed more than anything by the relationship of the English police to the main characters—always polite and respectful and trusting, even to women and lesbians and in the face of allegations of magic and supernatural murder.

I don't want to say too much more about the plot and content of this book, because although it may be more of an adventure story than a mystery, part of the fun is still watching the story unfold, the characters relate to one another, the stereotypes and clichés play to type—and just occasionally to surprise. And of course the fun of the steampunk gadgets, magical paraphernalia, and the gargantuan moving house makes the setting a good one for this truly escapist fantasy.

The flaws I discuss here are not insignificant, and reading this book with a close eye as a reviewer, I could not help but wince at some of them, but a less critical reader, one devouring steampunk fantasy and/or queer crime novels, one willing to read these as the "penny dreadfuls" they are meant to be, as ultimately disposable entertainment, would probably overlook these issues and have a jolly good read. If this series continues as promised, and Elle Black the psychic detective has many more disposable adventures, I'll no doubt dip in again some time, for she's an endearing protagonist and Watasin an engaging narrator.
Posted by Djibril at 13:12