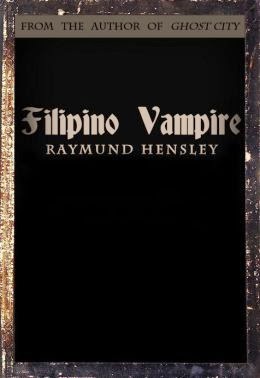 I had no idea what to expect with this one. The cover suggests a dark, moody piece; gothic with a ‘k’, all dripping candles and mood dry ice. Instead Hensley’s social gothic explodes onto the screen with amazing vivacity and verve. Commencing as a picture of an abusive childhood at the hands of a semi-psychotic, single, drunken mother, the story, told from the viewpoint of a teenage girl, never named, swerves left at the traffic lights into a full-on assault of horror, drenched in gore and astonishing imagery, sufficed with the shriek of the aswang; a Philippine mythological beast that feasts on flesh and blood, a flying torso that strikes at night on children. This is the vampire of Filipino cinema, and aswang films are a popular horror staple.

The narrative voice is the gobby, rough-and-ready street-smart talk of a teenage girl not quite in adulthood. Telling the story entirely in her own words, the reader is forced into the tunnel-vision view of an unworldly child, laced throughout with the uneasy insights of a prematurely-aged adolescent victim of systematic abuse, living in a violent slum. But before this becomes just a hurt memoir, we are up on the roof, tied to the TV aerial with our protagonist (her awful mother’s idea of a punishment), watching in terror as her mother’s warnings all come true, and an aswang sweeps down to carry her off to its liar. This is a Baba Yaga house of cannibalistic horrors, from which our girl manages to escape thanks to the personal sacrifice of an ally she makes there, called Vol. This is not the end, as subsequent action involving a gang of supernatural mercenaries (led by, of all people, her mother), a church containing a hellmouth and a final fling of nastiness via a familial curse all rack up the literary SFX budget with ever more ghastly schlock-horror.

Certainly while reading the book, strong cinematic influences come to mind, adding layers to the somewhat schizophrenic narrative direction. With a frankly barking mad, vicious maternal figure and a strong sense of religious guilt, the beginning reads rather like an ‘Extreme Carrie’. But with the proved reality of a real monster, we switch from human drama into R-rated body-shock—very From Dusk till Dawn. Comparisons, too, could be drawn with Carrie with the fear of a maturing body. The protagonist is 15 years old, on the verge of womanhood when the female, flesh-eating aswang shows up. And there are more layers to peel away in this delightful example of horror-as-medium of commentary on the human condition.

Stuck in the somewhat claustrophobic atmosphere of one voice, one head, and that of a child, we are never privy to any background context except the sensations of what the girl has witnessed before and during the book’s main events. It’s an uncomfortable place to be, as there is a terrible sense of desperate survival; caught in events beyond our girl’s control, and having only herself (and help from a girl her own age) to rely on in order to survive. All the adults fail her. Her mother is a terrible bully, and her mercenaries are money-hungry amateurs happy to use the girl as bait. As a side note, it is interesting to see a ‘supernatural butt-kickers’ group not on the moral side of events for once. The girl’s ‘perfect’ choice of mother (the mum of a school-friend) betrays her for money. This is a child who cannot rely on anyone to protect her, and the heartbreaking truth of this is reflected in her social condition, living as she does in a gang-riddled slum in Hawaii.

Although stories of gang violence fill her TV screen, this girl betrays no reaction to what she sees daily until a friend of hers is one of victims. Her sassy, “whatever”-style of talking to us (this first person is deliberately telling her story to the reader), and the growing dismissal of adult figures as any sort of protective or reliable resource shows the ruptured emotional state of a child forced by circumstance to grow up too fast, and she is pathetically awkward and suspicious of the one kind person: a sister-figure among the mercenaries who is ripped away from her and killed. There is no comfort for this child, and we have to realise the truth of this for thousands of children globally, when there is a deliberate juxtaposition of teen death in the street gangs and the unnatural deaths of children by aswang. Both are the direct result of adult mistakes, and the girl’s own fear, rage and violence (she’s no angel—not surprising given her upbringing), when seen in the wider picture drawn above, are a biting indictment of how badly adults ruin children’s lives on a daily basis.

More telling still, we never learn the girl’s name. She is the eternal nameless victim: young, female, vulnerable. In the epilogue, our girl, now grown and with her own family in the Philippines, hints at how violence in childhood is a scarring thing, reporting how she told her own daughter, bullied at school, to fight back. The relationship between mothers and daughters runs rotten through the whole tale, although it seems to be getting a little better by her own motherhood. Her mother fell out massively with her family, and was ostracised by them in the midst of a spectre of a mental health disorder. This does open an intriguing possibility: is the whole thing a fantasy concocted by a traumatised child to explain domestic and community violence that led to her mother’s death, somehow?

The narrative is masterfully written for the choice of voice; being disjointed, visceral, choppy and temporally telescoped we never drop from character, and never have the ability to stand back or reflect, as an ‘adult’ narrative voice would attempt to do. In the style of the best filmic nasties, things happen—then something else happens, offering no safe moment. The logic of cause and effect is not rhetorically smoothed out or made easy for us, events being funnelled directly through the girl’s senses. This is a total immersion into the highs and lows of her domestic life, and the brutality of body-ripping violence that she witnesses. There is no pause for reflection; it is immediate, raw, reaction—reaction—reaction.

Henlsey, a Hawaiian resident, with a run of zombie and flesh-crawling horror-comedies behind him, draws on local folk-lore to create a book that is about as close to a literary Evil Dead as you are ever going to find. You might be squirming at the icky parts, but you are drawn in by the uncompromising quality. Provoking and shocking, his prose easily strides the gap between thrilling gore fest and serious social critique, going to show that horror will continue to have legs as a vibrant, critiquing genre.
Posted by Djibril at 14:29