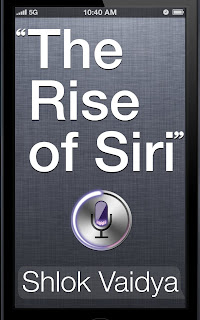 The Rise of Siri is a technology-centred dystopia based in the near future. In this self-published novel, China shuts itself off from the rest of the world, essentially withdrawing from international trade and assuming ownership of all assets within its borders; people included. The story focuses wholly on Apple Inc. and how as a company it contends this international development in subsequent months. While the book is set in the speculative future, the main characters are real-life developers, executives and designers. Anyone familiar with Apple as a company might also be aware of Jony Ive, Tim Cook and Scott Forstall—all of whom feature in the novel. In many ways, it almost makes the story a piece of fan-fiction. The characters are given a huge amount of textual respect and are often spoken of in frothily glowing terms.

If you’re not a big fan of Apple as a company, or are unaware of their famous employees, this does come across as a little too devotional. An example of this is where Apple’s Chief Executive Officer is hesitantly approached by a pregnant employee:


She stammered, “I’m sorry. I just—will I still be able to take my maternal leave? I promise, I mean, I’ll try to keep it short. My husband lost his job—”
A hush fell over the employees.
Cook’s voice faltered as he answered, “Of course.”
Then louder.
“Oh my god. Of course.”
She broke into tears, and she hugged him, and he returned it. When Cook pulled away he was crying and he was embraced by the rest. More tears spread through the company.

This attitude overspills to Apple products too, with the narrative often at pains to point out that each phone is an iPhone, each tablet an iPad. There is a tentative balance between this becoming a satire on the prevalence of branded products and their role in our lives, akin to watching a TV series that tells you in advance that there will be product placement woven into the action. I really want it to be the former, a social commentary on our obsession with electronic items, but it never quite convinces me this is the author’s intention. Instead, it feels closer to fan-fiction—albeit very well written and nicely paced fan-fiction.

The narrative otherwise rips with interesting ideas—for example the way in which large companies might clamour to purchase other organisations within their supply chain and the way such developments might be felt by all areas of an organisation. It highlights the role of China in the world’s manufacturing requirements and the catastrophe of such a country withdrawing suddenly. This global soap opera fizzes with a great deal of clarity and the narrative moves speedily throughout. Chapters are numerous and short, meaning it feels like a fast read of bite-size chunks.

In case you are unfamiliar, ‘Siri’ is a virtual assistant for Apple devices. It can perform a variety of functions all by speaking to it. There were similar services for mobile devices before it came along and many would argue it has been since bettered by the likes of Google Now, however, Siri is most certainly iconic amongst iPhone users. The novel’s proposition ultimately creates a futuristic Siri, who eventually becomes more powerful and given greater intelligence by the Apple designers. In many ways it mirrors the sci-fi trope of increased AI (Terminator and Matrix movies) but with a far more utopian outcome and undoubtedly solving all and any of Apple’s (if not the world’s) problems. This gives the narrative even more reason to describe the Apple staff in glowing, almost messianic terms. There is even a textual example:

Cook therefore becomes the ultimate CEO, the saviour for the faithful consumerist congregation who already view Apple through a religious lense. This is seemingly applauded by the narrative where it might easily have provided the basis for a socio-political satire on the nature of consumer electronics and global capitalism.

Perhaps this wasn’t the intention and we are just meant to blindly bask in the glory of the Apple corporation, perhaps it is an opportunity missed by the author, or perhaps there is criticism which is just far too subtle for this reader to note. Regardless, unless you are a hugely dedicated fan of Apple products, the resulting unease might well be the same. Are we to view the men (always men) who put this technology into our hands as demi-gods? Does our closer relationship with technology mean we have to begin creating new narratives through which we can worship its creators? As science has usurped religion as the current social paradigm, are our electronic products the religious icons of our day, its designers our new gods? Ultimately, there is great socio-political depth to be explored in The Rise of Siri, but I remain unconvinced this was necessarily the narrative’s intention.
Posted by Djibril at 17:46