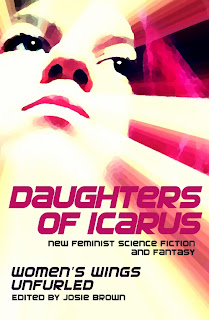 The Daughters of Icarus anthology, published by the inclusive and experimental small press Pink Narcissus, and edited by American writer and scholar of political theory Josie Brown, labels itself, “New feminist science fiction and fantasy”. The cover (but not the title page) also carries the line, “Women’s Wings Unfurled”, an unofficial subtitle highlighting the editor’s intention that the stories explore the common tropes and adventures of science fiction if women take the initiative in them. While there are indeed some excellent examples of this kind of fiction, the anthology as a whole is a disappointingly mixed bag, including some poorer quality pieces, some that fail on various important levels (notably issues of intersectionality), and some frankly baffling inclusions. Measured as a venue for science fiction and fantasy, Daughters of Icarus contains enough magic to warrant classing it as one of the better examples of this kind of beast; as a coherent whole on the terms it seems to define for itself, it is somewhat less satisfying.

Brown’s introduction to the anthology is mostly a rather defensive explanation that feminism does not entail “man-hating”, does not involve women tearing down the old world, or even building a better one, but merely building a “fuller one”: one that has women in it. This may feel like a bit of a low bar, but that’s fair enough (and this male reviewer is certainly not going to lecture to anyone on what feminism should or shouldn’t include). The problem is that some of the stories in this volume don’t live up to even this rather liberal definition. Others, while they certainly show science fictional worlds in which women take the initiative, do little more than that, failing—in some cases quite egregiously—to recognize that prejudice and privilege are both intersectional, that race and class and sexuality and disability and colonialism are not just other issues, but are all issues deeply involved in one another and in women’s stories.

A few stories stand out as surprising or even mind-boggling. ‘Graffiti on a Wall’ by Janett L. Grady is the story of a prejudiced, manipulative, bullying, cheating businessman who finds out that his wife (whom we barely meet in the story) is just as repugnant and disrespectful as he is (except the end of this patriarchal and heteronormative story seems to suggest that she isn’t sexually promiscuous), and so falls in love with her again. Jennifer Linnaea’s ‘Unattainable Red’ seems to be an obliviously postcolonial story about a disabled woman’s struggle against native bureaucracy after her culturally appropriating adventurer husband dies stealing a trinket for her from a sacred mountain. ‘Sanctuary’ by Anna Sykora is an emotionally powerful, but a bit “white tears”, piece about a disabled wildlife warden on a colonized planet, struggling between her love for nature and science, and sympathy for the rebelling natives. Laura Givens and Nicole Spencer’s ‘Life After Wartime’ is another somewhat patronizing and colonial story about human do-gooders on a post-revolutionary world, attacked by rebels who are not satisfied with their victory and the corporate “peace” that follows; our heroes of course defeat the rebels and lecture them about revolutionary victory and getting back to their lives. Despite my criticisms, most of these stories are not terrible, and it would in any case be peevish to focus on the stories that worked less well for me, when there are some really successful pieces in this anthology that go to new places and do so very well.

One of the most beautiful stories in this volume is ‘Kapras of Many Voices’ by Thoraiya Dyer, which is set in a tribal, perhaps post-apocalyptic culture, in which the categories of “female” and “male” are not rigidly defined by sexual characteristics, but are markers of strength, of wisdom, of fitness to govern. This largely well-functioning matriarchal culture is threatened both by corruption and deceit within, and by hostile foreigners without, as the protagonist, Kapras comes of age and to her own power. The world is sparely sketched, with background details hinted at or lightly shaded, but never info-dumped or made a focus of the story, a technique which is both effective and a delight to read.

Tina Starr’s ‘Girl of Prey’ is a harder story, both in the edges it rubs against the reader and in the unflinching ugliness of the world it depicts. We follow the engineering and upbringing of Anya, a child of rape who is genetically modified for strength and agility, raised without love or companionship, molded by her mother and absentee “father” for revenge against a racist world. The story is heartbreaking, upsetting, the characters unsympathetic and their decisions unconscionable, the conclusion bleak, violent and shocking. A parable of the difficulty of raising children of color who have to grow up too fast and learn to survive in a racist country, this story is not easy to read; every reminder to Anya to “be careful” because she is “different”, resonating painfully in a culture where black children like Trayvon Martin are othered, seen as threatening, and killed with impunity every day. ‘Girl of Prey’ also reads as a more intelligent variant of the movie Splice (2009), without the idiotic science, the saccharine childhood, and the ridiculous gender essentialism. I’m not sure whether I liked this story, but it made me uncomfortable in ways that takes brilliant writing to do.

Less discomforting but rather existentially challenging, ‘Me Myself I’ by A.J. Fitzwater is an almost magical realist tale of Lana, a troubled, low self-confidence young woman who discovers a café (“Lana’s”) in which she meets countless alternate universe versions of herself: the Boss, the Brain, the Rock Star, the Mother, the Priest, the Crazy Bag Lady. By engaging with and observing this surreal mix, Lana learns both perspective and potential, sees herself coming to terms with loss, weakness, social constraint and expectations. It does not make her life suddenly perfect, or cure her self-esteem and anxiety problems, but in some way it gives her the strength to carry on, the courage to stand up for herself sometimes, the sense that she is not alone or a failure or hopeless for not being the success media teaches us we all should be. This is perhaps the most wonderfully feminist story in the volume, celebrating the importance to all women (and not only women) of companionship, sympathy, support and learning from one another. I’ve reread this story a few times, and think I still have lessons to learn from it.

Darkly gorgeous, titillating and heartbreaking in equal measure, E. Catherine Tobler’s ‘Item 317: Horn Fragment w/Illus’ is another story in a fantasy setting. Starting gently, we see an injured and abandoned woman cataloguing wares in her uncle’s apothecary and wondering over a mysterious, unlabelled sliver of horn. We never see the nature of Stella’s injury, nor learn exactly what the man in an alley did to her to leave her so damaged, but the reader’s imagination is a stronger inventor of such details than any words. When Stella falls, powerless and terrified, into a dark underworld lost to the earth, she meets Asteria the Minotauress, also injured, and is shown around her beautiful, lonely home. This is a haunting story about women who have suffered violence, flawlessly written and quietly unforgettable.

More folktale than fantasy, ‘Ancestors Enthroned’ by Marissa James is the story of a young woman who revives the long-lost tradition of embalming the dead in order to mount them high on an inaccessible cliff overlooking her village. Kharlaji becomes renowned after embalming her father, and steadily becomes a world-famous and undying tender of the dead. A piece that is sweet rather than punchy, an ending more inevitable than twisted, but moving, memorable, convincing and potent. Lovely stuff.

A few other stories stood out as very interesting. Therese Akenberg’s ‘Two Rivers’ is a complex story of an anthropologist on a world with three genders: female, male and the untouchable “it”s, who breaks the code of non-interference to prevent a civil war and rescue an abused neuter. ‘Pretty Maids All in a Row’ by Caren Gussoff features an island of clones, all variations on their maker, Margaret, the last woman on earth, whose peaceful, beautiful life is threatened by the arrival of a bear (probably a man), and is told in the first person plural, the protagonist and her sisters all being part of a collective, identity-sharing “we”. Donna Scott’s ‘Hands’ is a slightly uneven but fascinating and powerful piece about the fetishization of physical perfection, the objectification and abuse of women, internalized misogyny, and the liberation that comes with destruction.

Even if the excellent stories I have listed above were the only content of any value in this volume, which is emphatically not the case, the anthology would still be worth its cover price on this basis alone. For all its flaws, Brown has created a work of ambition and courage, a valuable addition to the growing body of publications that focus on speculative stories by or about women, and by that token alone it is a worthy addition to the bookshelf of a dedicated collector. Although I have criticized some editorial positions and decisions, and the coherence of the volume as a whole, if the stories in this anthology comprised the first, let’s say, three issues of a putative new feminist science fiction magazine, we would consider that to be of a very strong standard indeed.
Posted by Djibril at 15:15