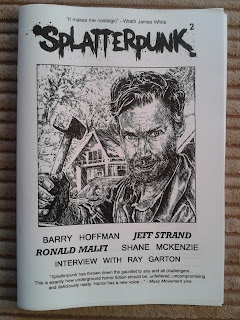 Splatterpunk is a sub-genre of horror. It is, as many genres are, difficult to define exactly but the tone of this, the second issue of a lively little magazine dedicated to the art form, is horror that often involves people rather than monsters (in the traditional sense). It is no-nonsense and straightforward, but his doesn’t mean that the literary tone of Splatterpunk magazine is poor, by no means. All the stories, reviews and interviews are well written; the fiction is logical and character-driven. The prose itself is direct, cut to the bone—as are many of the protagonists—and compelling. This magazine exudes energy and enthusiasm; it is a labour of love. A quote on the cover by horror writer Wrath James White states that Splatterpunk makes him “nostalgic”, and I understand what he means. This is a true small press production: short, sharp, well-illustrated and with the feel of the homemade, although far from homemade in quality.

Okay, the stories. There are four and each one is economic, self-contained and satisfying. ‘Fair Trade’ by Jeff Strand is a revenge story with extra spices; affair, discovery and consequences. It ends with a hint that just when you thought things could not get worse, it seems that they might. Edged with black humour ‘Fair Trade’, is a perfect, neatly-crafted horror short

Shane McKenzie’s ‘Fat Slob’ gives us a drastic and viciously supernatural cure for the type of morbid obesity that crosses the line from inconvenience to disability. There is a monster in this one, and a highly original one at that. Sick as I am of vampires, werewolves and zombies I welcomed this one in with open arms. And what a monster it is. This tale reminded me of the sort of short story found in those portmanteau horror film of the ‘sixties and ‘seventies.

A strange and brutal tale of sisterly love, ‘Room for One’ by Barry Hoffman is a difficult work, the subject matter bleak and savage. Its roots, however, dig deep into the strange and its dénouement is startling and unsettling. Again, this is the sort of story that, as far as I understand it, defines the splatterpunk genre. I admit to being uncomfortable with violence toward women, and this did venture near to the edge of my own boundaries of taste, but you don’t read horror for its comfort factor and there are times when you are going to wince.

Probably the most subtle and ambiguous story in the collection, Ronald Malfi’s ‘The Jumping Sharks of Dyer Island’ concerns a holidaying couple, one a slightly reluctant tourist, the other enthusiastic and trying to make the break work. They are persuaded to take a shark-watching trip which involves a steel cage and diving equipment, dangerous, but worth it surely… The beauty of this tale is the unexpected, the trip wire it conceals with its the odd and disturbing ending.

Splatterpunk deserves its chance. It is a raw and energetic venture in a world of the safe and bland and in its way, a welcome manifestation of pure small press publishing. It is fearless, hard and obviously a labour of love. So if you like your horror straight-on, well written and original, I have the feeling that Splatterpunk will be the place for you.

Purchase Splatterpunk Zine from the publisher
Posted by Djibril at 14:11