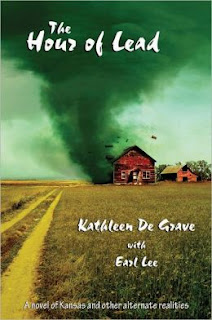 The Hour of Lead is an earnest novel, published by the anarchist and social activist See Sharp Press, with science fictional themes including corporate dystopia and time travel, with a nod to the Butterfly Effect, but written by an author with no evident background in science fiction literature or fandom. Set in a near future Kansas facing environmental collapse where an unfettered capitalist corporation-government runs the world to neocon wet-dream principles, with a psychiatrist as protagonist and his astrophysicist wife as deuteragonist (for although many scenes are told from her perspective, she is clearly second fiddle in this book), the novel demonizes not only free-market capitalism but also nanotechnology and other invasive environmental and medical sciences. There are several problems with this story, from characterization to plot contortions and false-dilemmas driving the action, but it is an engaging read, and it does succeed at the authors’ stated aim which is to present moral quandaries without offering any easy answers.

The core premise of this story is a young psychiatric patient, Mikey, mentally scarred to the point of catatonia by having watched his baby sister die of heatstroke while they were locked in a rain vat by their neglectful father, and the experimental drug the doctors use to try to treat the trauma. The treatment is unsuccessful, and Mikey descends into screaming torment, blaming himself for his sister’s death. The doctor, Weylan, desperate to fix the harm he has done, experiments with regression to the past via psychotropic mushrooms, and inadvertently finds he has changed his own history. Several such alternative histories play out through the novel, some better and some worse than the initial state of dystopia, but most having more effect on Weylan’s relationship with his wife than with the social and political state of the world. In the meantime we see the ecological damage (a tornado pandemic in the whole central US), economic fascism (repressive laws, control and surveillance by the government), and the few pockets of sanity such as a small town with its small cooperative barter economy. The world presented in this novel is much more interesting than the characters who inhabit it, in many ways.

The main character of Hour of Lead is Weylan, a psychiatrist riven with guilt for not having stood up to his boss over the controversial treatment of his child patient. Weylan’s background is full of traumas and clichés of his own: he is apparently one-sixteenth Cherokee (a shame that an author who wanted to appropriate Native American culture and ritual drug-use for plot purposes didn’t have the courage to write an actual NDN character into the story); his mother died in a tornado when he was a baby; his father blamed him for her death, and so ran away to the army rather than raise him, also dying in combat when Weylan was young; he was therefore raised by a reactionary, abusive, salt-of-the-earth grandfather. His history shifts and changes a little with the time-travel sub-plots, and the few friends he has around him change entirely from version to version, but his general state of perpetual guilt and ineffective personality persists. The secondary character is Weylan’s wife Pandora, a research astrophysicist who leaves him in a rage at his misjudged treatment of a child patient. Some of the story episodes are told from her perspective, but as her history shifts even more radically than Weylan’s whenever he finds himself in a different version of his history, and she has no agency or continuity in these changes (nor memory of them), she is in no way a satisfying character in the story. By the end, she seems to exist only as a reward for Weylan when he “makes things right.”

The time travel motif in this story tips a hat to the Butterfly Effect, since Weylan’s attempts to change small things such as his mother’s death, or the shooting of a young activist, have repercussions larger than the event itself. But the changes to the world stop far short of the catastrophic effects that often accompany accidental time travel in science fiction. In fact the principle outcomes of Weylan’s meddling with time are not in the area of pharmaceutical psychiatry or nanotechnology, the fields in which he works, but in his relationships with people around him, especially with his wife Pandora—several of his friends seem simply to pop out of existence when he returns from a trip. Given the degree to which Weylan and Pandora’s relationship changes, one eventually comes to feel that their meeting at all is something of an unbearable coincidence, and their “belonging together” more like the plot of Serendipity than the result of credible social interactions.

The real moral quandary behind Weylan’s crisis is the question of whether to treat a severely traumatized little boy using “unnatural” nanobots and mind-altering drugs. Although Pandora is horrified that he would consider messing around with the brain of a child so young at all, the real abuse in this case seems to be the use of experimental technology by a lead doctor in the pocket of powerful pharmaceutical industry unfettered by either health and safety legislation or ethics committees. The rejection of all medicine as unnatural is surely at least as bad a position as the unscrupulous behavior of the commercialized medicine.

There are a few odd or careless errors in this book: a poster showing nanobots is described as “artists’ renditions, since actual nanites were only a couple of microns across … invisible to the naked eye” (p. 5); is there no microscopy in this future? Weylan compulsively (but secretly) uses a cup with “Sponge Bob Square Pants” (sic, passim) on it—why not the usual spelling “SpongeBob SquarePants” I’m not sure. Paragraphs occasionally start with two or three tabs, rather than the usual indent, and odd words or phrases in the text appear in bold type. I hope a final proofread fixed both of these problems in the published version of the book.

Despite some of the criticisms above, this is an ambitious and imaginative work, with many ideas bouncing through it. The author clearly cares deeply for her characters, and some of this can’t help but rub off on the reader. The ethical and political ideas are the real stars of the story, however, and although there are no easy answers given to any of the quandaries offered, there are certainly thought-provoking and controversial problems to be taken from this novel. The occasional sense of naivety in this work may be as much to do with unfamiliarity with some of the tropes of science fiction—and therefore a tendency to reinvent the wheel—as anything else. On its own terms, this book is largely a success, and if it didn’t work as well for me as it might, that’s at least partly my problem with the genre rather than the author’s shortcoming.
Posted by Djibril at 14:05