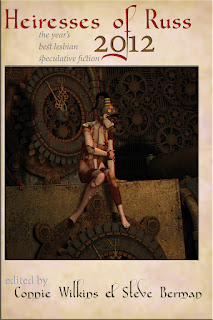 This is the second annual Heiresses of Russ anthology of lesbian SF, collecting stories first published in 2011. Despite the naming of recently deceased Joanna Russ in the series title, this anthology is not full of the aggressive, uncompromising, acerbic feminist science fiction she was famous for, but is rather a mixed and representative selection of different styles in queer SF with lesbian protagonists. By the nature of the collection it is hard to identify a single theme in this volume, but many of the stories share a tendency common in lesbian writing: fairly uncomplicated love stories with happy endings are preferred over angst-ridden or treacherous romances; this slightly clichéd, optimistic simplicity, sometimes classified as twee or idealized, is only as escapist as the worlds without overt homophobia that also occur often in queer fiction. Of course, by no means all of the stories in this collection are in any sense romances, and there are exceptions to this tendency; sometimes, indeed, the divergence from simplicity and innocence is the twist in the story. Like last year’s, this anthology is a mixed bag with some excellent pieces, more good than mediocre, and none really terrible. Most importantly, this collection of fourteen stories is an impressive gathering of speculative fiction, regardless of the theme or the reader’s tastes.

The fourteen stories in this anthology are extremely varied, spanning styles and genres and viewpoints and themes almost as widely as could be imagined. We find steampunk and urban fantasy, futuristic science fiction and cyberpunk; stories throw us pirates and graphic erotica and slapstick humor; the editors have even included dark horror and hardboiled detective stories, alongside subtle and gorgeous magical realism. Jumping from story to story is sometimes disorienting, but this is clearly not random hopping but rather a whistle-stop tour of lesbian writing that is as broad and inclusive as speculative fiction itself.

This inclusiveness is symbolized by the way the volume is bookended by two very different, but equally wonderful pieces. The opening story, Katherine Fabian’s ‘In Orbit’, is a folktale-like story of love blossoming in a very traditional setting, of a young Jewish woman choosing a husband from among the grandsons of a family friend. Set against a steampunk background, with the protagonist Sarah an expert builder of clockwork and golems, the story has a lovely simplicity that any wizard could envy—far from being unexpected or scandalous, the romantic twist to this tale is as inevitable as the turning of a cog, and as natural as the ticking of the hours. The volume closes with ‘God in the Sky’ by An Owomoyela, another understated piece, but this one strictly realist and rational. A young, aggressively skeptical scientist finds herself at a loss when the appearance of an unexplained light in the sky makes a lot of people around her question their shallow lives and either turn to religion or feel the need to move closer to their families. More and more isolated in her rational response, Katrina herself starts to feel the need for comfort and reassurance—not because of “God” in the sky, but because of her social life disintegrating around her. This story does not come down for or against either rationality or spirituality, but rather urges a life that balances the intellectual and the emotional; the needs to learn and to love are not in conflict, they are what make us whole.

Perhaps the most clichéd and over-the-top story in the collection is Lindy Cameron’s ‘Feedback’, a cyberpunk hardboiled mystery with a disabled protagonist, grizzled police officers, a libertarian wet-dream’s lawless “Cy-city”, too-easy love and/or lust, lots of convenient coincidences and a plot that ultimately didn’t make a lot of sense. Despite all this—or probably rather because of most of it—‘Feedback’ is a hell of a lot of fun to read, even when you’re rolling your eyes at the dialogue or gritting your teeth at the insensitive or stupid characters; and it does include one of the nicest examples of generational conflict resulting from near-light-speed travel I’ve read. Another story that stands apart from the smooth tone of the anthology is ‘The Carrion Gods in their Heaven’ by Laird Barron, a supernatural horror story set in a cursed cabin in the backwoods, featuring an abused wife on the run with her girlfriend, in what may be the most problematic lesbian relationship of any story in this volume. The gruesome and paranormal violence that unfolds undoes everything, and the fact that the villains of the piece suffer from it as much as do the protagonists is little consolation in this bleak and tragic story.

One of the strongest pieces in this anthology is Sunny Moraine’s ‘The Thick Night’, which I remembered from its first appearance in Strange Horizons last year. A story with unflinchingly heavy themes but a respectful lightness of touch, this is a far-fetched parable on foreign aid, conflict, fear, prejudice, abuse, community and belonging. A traumatized survivor of war and the only support for her younger siblings, Mkali receives as part of a UN aid package an experimental robot, which helps to farm and build on her land, and soon becomes an intimate member of her family, a comfort as well as practical help. This is a beautiful story of healing on many levels: personal, emotional, social. The conflict that arises to threaten Mkali and her family is ultimately resolved not by fighting but by sharing and participating in community; she becomes stronger by joining and helping others, not by remaining a rock against the world. It’s a story that touched me as much upon rereading it here as it did last year.

Some stories paint a wonderful setting from the opening scene, especially in speculative fiction where not only characters and scenarios, but the whole world and reality are being created in front of your eyes, sketched out in spare, expert strokes for your imagination to fill in the spaces. But some stories then snatch this beautiful world out from under you, leaving you sick with disappointment and disillusionment, your innocence dashed to the wind along with that of the protagonists. ‘Follow the Waves’ by Amal el-Mohtar had exactly this effect on me. Hessa is a dreamwright, a wish-fulfiller, a gemsmith who can construct visions and feelings at her clients’ request. This is a story about creativity, about finding the beauty in the world and projecting it into your work, and as such it both describes and exemplifies an artistry that any writer (and I bet painter or musician) will recognise. Late in the story comes a breathtakingly cruel twist, which physically hurt to read. The whole scenario is based on a very clever premise, delightfully executed, and the ending redeems the turnaround with so much promise for more hope and beauty to follow the cruel reversal. This is an astonishingly good story, and one I’m going to keep coming back to before I decide exactly how I feel about it.

Possibly the single most ambitious story in this anthology is Nalo Hopkinson’s ‘Ours is the Prettiest’, which takes place during the Afro-diasporic Jou’vert street festival in a magical city half-way between the real world and that other realm that sometimes intersects with it, bounces back, steals people or whole towns for a few years, only to return them, confused but unaged. Damiana fell into Bordertown from Toronto once, is now walking a fine line between her violently jealous best friend and ex-girlfriend Gladstone, and Gladstone’s new lover Beti, a girl fresh from out of town (and possibly out of world) who doesn’t realise the danger she’s in from Gladstone’s hot temper and massive fists. But during Jou’vert the worlds are closer even than usual, and Beti may be more dangerous than them all put together. As well as painting a fantastic picture of the borders of fairyland, of the half-human elves and spirits of the festival, this is a story about the dynamics of relationships, of involvement (even with the best of intentions) in someone else’s affairs, and how our own expectations and insecurities color the outcome of our attempts to get along with people. It’s a masterful piece of work.

A little less successful for this reader was ‘The Tides of the Heart’ by David D. Levine, a story about plumbing and water spirits, with a bit of a naïve love story central to the plot and a heavy-handed gay marriage theme. Steve Berman’s ‘D is for Delicious’, coincidentally the only author to appear in both Heiresses anthologies so far, is a story about an old, repressed lesbian who becomes a child-eating witch with an icecream van; perhaps there is some metaphor about the demonizing or witch-hunting of queers, or the slander about dangers to children, but it wasn’t at all clear to me. ‘And Out of the Strong Came Forth Sweetness’ by Lisa Nohealani Morton was a well-written story but with a setting that didn’t work very well for me: a hairdressing witch, a damaged homeless man with the heart of a lion, and an officer in the flying, laser-eyed religious police of this repressive town.

This second volume of Heiresses of Russ follows directly in the footsteps of its hugely successful predecessor, building a corpus of great lesbian short speculative fiction year by year in memory of one of the most influential and provocative queer feminist authors in the genre. Judging by the strength of this instalment, if it were possible to subscribe to the Heiresses of Russ anthologies in perpetuity, I would hand over my money now. These stories are worth reading well outside the LGBT-interest subgenre of speculative fiction. Even if you’ve never thought lesbian fiction was relevant to you, you could do a lot worse than buying this volume and enjoying, learning from and being terrified by the stories within.

To characterize Russ's fiction thus is to limit it too much...she was never one to shrink from challenge to feminism, but not all her fiction was "aggressive"...some was slyly insinuating, and she struck other chords as well.

You're right, @Todd_Mason, and I apologise for that rather slapdash formulation. (To be fair, I did say "she was famous for" not "the only thing she wrote", but I'm not trying to weasel out of it!) It would take several volumes of this kind to do any kind of justice to Joanna's breadth, depth and range of work (and I'm sure the next several volumes in this series will do just that).

Thanks for the correction.