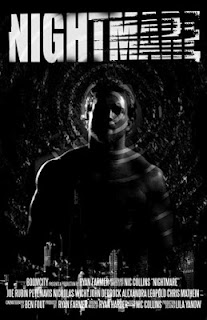 Nightmare, a short sci-fi film directed by Nic Collins, is a monochrome thriller that broods with paranoia and intrigue, even from the first scene. It tells a story of Carl, a man who has sinister and violent dreams that each feature a brutal murder. However, the dream scenarios then quickly then happen in real life and Carl is motivated to kill the killer before the next murder occurs.

The short movie, shot in a dream-like way where reality and dream are constantly blurred is pleasing yet challenging to watch. The production is very dark and wholly dystopian; shadowy figures, penetrating sounds and fuzzy images. Perhaps the most shadowy is Carl’s brother Sig, who, by discussing Carl’s dreams with him, will make every psychologist smile internally (early twentieth century psychologist Carl Jung was famous for his dream analysis, as was his contemporary Sigmund ‘Sig’ Freud). It is difficult in that I do not want to give too much away, but as the film progresses, Carl becomes more confused, troubled and paranoid. Because of the nature of the filming, it often comes across as a little arthouse, yet at its heart is a intense thriller, not dissimilar in feel to intimate SF productions such as Memento.

Much of the filming is done in an off-kilter way so that light and dark elements of each scene are distorted. In the parts that focus squarely on Carl, particularly his dreams, scenes are quite abstract, overly clean and staged. When the dreams become real, this feeling is echoed, creating a déjà vu effect for the viewer that works brilliantly with the theme of the film.

The director’s treatment of Carl is very intimate, emphasising his confusion and paranoia. When events appear distorted to Carl, so too the direction distorts the visuals of the viewer. There were times I was reminded of the psychedelic movies of the 1960s and 70s. While the film is not a colourful drug-induced abstraction, the perspective of the viewer is constantly challenged and tormented. Nightmare isn’t an ‘easy’ film to watch, but it keeps you gripped throughout.

What drives the movie is the unknown. Why is Carl experiencing this? How is Sig involved? How did this happen and what is real? There are distinctive clues that the problems Carl faces are the result of post traumatic stress disorder and the plot harks back, via gloomy close-ups of framed photographs, to a time when Carl and Sig were together in military service. It would be wrong to suggest the film ‘handles’ PTSD, but it certainly attempts to bring it into focus.

Another theme raised is that of conspiracy theories. Sociologically, and in the real world, conspiracy is something that occurs in most civilisations and raises as many questions about human gullibility as it does about the existence of shadowy, faceless elites. In the film world however, there is always a smoking gun, and Nightmare uses this to superb effect through the film and encourages the viewer to seek the presence of shadows even within the monochrome shadows of the scenes themselves. With the perpetually-off-focus filming technique, the viewer has no choice but to be engaged and yet also confused as they share Carl’s dreams.

Nightmare is a dark film, which subsequently explores dark themes and, as mentioned, it’s not an easy watch. Rather, it penetrates the viewer and stays with them after the running time has ended. While short, Nightmare relies on concepts known to the audience so it’s able to develop its novum in the twenty or so minutes it lasts. This is somewhat the opposite of the recently reviewed short movie Godmachine, which I felt required a much longer period in which to nurture some of the concepts it so ambitiously suggested. Nightmare is certainly stark and continually brooding, but at its core is a captivating and thought-provoking essence which I’d certainly watch more of.
Posted by Djibril at 14:05

What did you think of the performances?