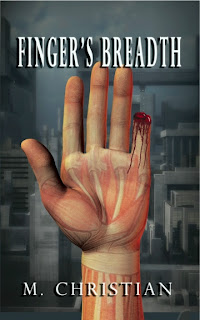 Finger’s Breadth takes place in San Francisco in the near future—someone is drugging random gay men and cutting off the tip of their little finger. The gay bars in the area are almost empty; men are staying home, scared it might happen to them. The police are baffled; there are no suspects. The first victim, Varney, works for the newspaper and becomes a celebrity of sorts. But his celebrity isn’t exactly earned, and this is eating Varney up inside. He debates with himself whether to confess his sin while still using his infamy to reach out to the public.

Then a gradual change comes over the gay population—those who have been cut are looked at as desirable, exciting. Those who have not been cut now begin to feel left out, even ashamed—aren’t they good enough to be approached by the cutter? Are they unattractive? The bars fill up again; the patrons divided between victims and wanna-bes. It’s rarely said aloud, but those men who are whole are hoping to be the next victim. The internet burns with men in chatrooms, looking for the cutter or a reasonable facsimile. Although the story is seen through the eyes of several characters, quite a bit of the book is written in chatroom format, with the cutter—or supposed cutter—looking for victims.

Those men who have had their fingertip cut off have a certain confidence about them; now that the worst has happened, what else do they have to fear? They feel invulnerable, brave. Those who are still intact begin to take drastic measures—cutting their fingers themselves or even having cutting parties.

So who are the real victims?

Varney is a nice guy who has gotten himself into a situation he’s not sure he can get out of. As a sort of penance, he uses his newspaper column as a format to reach out to the gay community, as well as inviting them to vent to him about the cutter. But even this becomes too much for Varney to deal with, knowing the real truth of what happened to him.

Finger’s Breadth is a suspenseful, erotic and disturbing tale of what happens when the monstrous becomes the desired. While a little slow at the beginning, the pace picks up towards the middle of the book and it's difficult to put down. The characters are well-written and believable; their angst very real. Taylor, who has been traumatized by the goings-on in the city, takes refuge at an ex-boyfriend’s home when Taylor is afraid he is next on the mutilator’s list. His fear of being a victim, and the insecurity over he relationship between him and his ex-boyfriend are palpable. The story is a little hard to follow at times—there are times when I’m not sure who belongs to the chat names—but is overall riveting.

This is not a book for the easily offended; there are many graphic sex scenes. The sex scenes are not gratuitous, however. They are an important part of the story as much as the cutting scenes are. Finger’s Breadth will get to you. It may disgust you and it may even arouse you, but it will definitely get you thinking. Would you change yourself, physically or mentally, in order to fit into the majority of your peers? Teens do this—do the rest of us really outgrow the urge to be one of the crowd? Even if you’re not part of the majority, you may change yourself to fit into a sub-group. Everyone wants to be wanted.

WONDERFUL! So glad you enjoyed it - that means a lot to me!

So glad you enjoyed the review. Your story was great.

But what the world wants to know is--did Christian end up cutting his finger off?