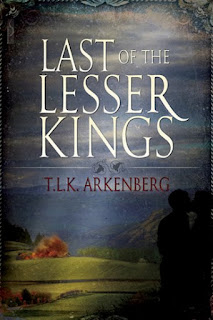 In a world torn by war, Neathander plays a pivotal role in the salvation or destruction of the independent human kingdoms. This novel pursues the romantic interests of a magician who wants to escape the wars that he has been participating in for the past thirteen years. T.L.K. Arkenberg’s debut novel, published by Silver Publishing, Last of the Lesser Kings is a story of love, betrayal, kingdoms, and Kings. It is romance mixed with fantasy tied together in a world where kingdoms rise, fall, and struggle to survive against the tyranny of one man who wanted everything, no matter what the cost.

Neathander is many things; cruel yet kind, loving, yet callous. He is wise, yet confused, and falls easily beneath the attraction of strong, powerful men. But, when Janir goes too far in his desire for conquest, Neathander betrays the man he has loved for thirteen years. After the falling out with Janir, a chance meeting with Aorin forever changes the magician. Kindness replaces cruelty, until Neathander isn’t sure who he is anymore. With the hope of redemption little more than a seedling, he remains with the people of Rivensed and the last of the independent Kings. This relationship between Rivensed’s King and Neathander is the heart of the book, as well as the critical focus of the conflict in the novel.

The story has several themes, but the most major ones include love, lust, redemption and jealousy. Neathander’s character is one so realistic that it brings to mind several key stereotypes while reading—character types that fit the book and the character so well that it is the glue that binds everything together. At a first glance, the use of these stereotypes is disconcerting, until one looks deeper at the character and understands that for all Neathander is not a human, he has a human’s nature.

While there are elements of epic fantasy, the story is not about how the world must be saved, or even the kingdoms that are dominated and controlled beneath the cruel hand of the High King. Instead, it is a story of the people that surround Neathander. Some change him; for the better, and in some cases, for the worse. Others are changed by him. But, the underlying theme of redemption is never quite forgotten—not by T.L.K. Arkenberg, and definitely not by her characters. It is brought to the forefront, the desire for redemption so strong in some of the characters that the need for it is capable of extinguishing even the light of hope.

The resolution of the book brings with it the expected conclusion, falling prey to the expectations of the audience. In a way, it has the fairy tale ending that is a little too perfect to be real.

For fans of same-sex couplings, this novel is almost the ideal romance. However, this novel falls short in terms of being an epic fantasy. Depending on where the book is acquired, it may or may not have the epic fantasy tag, which is misleading. The description, which paints the picture of an epic battle of the human realms, also aids to this misinterpretation that this book is of the epic fantasy genre. While there are strong fantasy elements present, the author opts to gloss over the elements that would make it a solid epic fantasy in exchange for pursuing the romantic interests of the men within the novel. Rather than being a full epic fantasy, ripe with culture and kingdom, it is more of a traditional fantasy that bit off a little more than it could chew, donning the cloak of epic fantasy with a thin grasp. However, to make up for that failure, T.L.K. Arkenberg has a very strong writing style suited for pursuing the intimacies of relationships, no matter what gender the partners are.

If I had to categorize this novel, I would classify it as a Homosexual Romance novel with fantasy influences. However, while relating to same-sex couplings, the theme of prejudice is glanced over, and despite the male-dominated, traditional world the characters live in, the expected prejudices don’t really exist. Aorin, who is described as old-fashioned and traditional, is easily swayed to change his original orientation (conveniently) by the book’s end. This gives the world a flat and unrealistic side that made it difficult to suspend disbelief.

One notable downside to this novel is that the ending was just too abrupt. T.L.K. Arkenberg spent a great deal of time building to the climax, but once it arrived, it passed by so quick that it was over before I realized it was even happening. This disappointment was made up for in other regards, but I found that the read was not nearly as satisfying as it could have been, especially considering the care for the characters and plot right up to the end of the book. While Neathander’s redemption is acquired, the price paid somehow felt empty despite the pleasant tone the ending of the book takes.

Arkenberg manages to do a complete about-face in terms of Neathander, evolving him from the extreme of cruelty to something most of us would identify as a kind person with a good sense of justice. Janir’s character doesn’t evolve as much as one would like, stagnating when a strong villain could have made this book much richer in both tone and depth.

That said, Last of the Lesser Kings was worth the read to a point, as the characters are fallible and likeable—including even Janir

However, there was a critical downside that effectively ruined this book for me. This is the inclusion of threats as a part of the copyright notice in the beginning of the book. Instead of the standard notices provided by large-scale publishers, Silver Publishing has opted with threats that are enforced by the FBI in conjunction with South African Copyright Law. The associated fine listed within the book is $250,000, and the warning spans four pages on a standard 6-inch kindle. Unlike other publishers, Silver Publishing does not permit ‘owners’ of the book to transfer the book between devices the reader owns or permit lending of the book to friends or family, essentially granting a one-use license to read the book and store it on one device. Reader and lover of books, beware. The harsh tone of the threat and warning is not pleasant to have to sit through, and will likely leave a sour taste in the mouth.