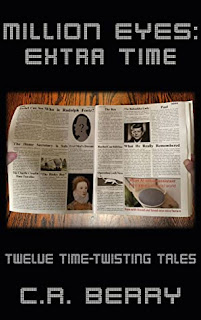 We begin with William II of England (William Rufus, son of William the Conqueror) with a book in his possession. A book called The History of Computer-Aided Timetabling for Railway Systems which is, says William, “an omen foretelling a future that God is compelling me to avert.” Shortly afterward, William is killed by a stranger who talks into a flat rectangular object, swallows a red object like a small pebble, and disappears. The book, however, is passed down through generations of Royalty (at one point ending up with the Princes in the Tower and Princess Di), though hunted after by mysterious and murderous agents. Eventually, the story of these events comes to the attention of former history-teacher and obsessive researcher Gregory Ferro and Jennifer Larson, a history graduate with a fondness for Dr Who, a terrible record for keeping jobs, and a reluctance to getting into mad conspiracy time-travel theories about books published in 1995 referenced in a history book of 1977 and mentioned in a 14th century letter. For part of the book, they become a kind of Mulder-and-Scully duo, but the said mysterious and murderous agents become extremely murderous if a bit less mysterious, being employees of a tech firm called Million Eyes which at one point is referred to as recently having bought up Apple. At their heart is the dangerous, sinister, and glamorous Miss Morgan.

Why the book is important, and the nature of the conspiracy, eventually comes clear, though how and why a Norman-French speaking individual is able (on page 12) to understand what is inside a book written in late 20th Century English is not revealed to us until a burst of blatant hand-waving on page 291. Million Eyes is a fast-moving thriller about corporate power which is the first part, it seems, of a trilogy; but as soon as you stop to ask why these people are set on a course to take over Britain, you start scratching your head and deciding that never mind, it will all be explained in further volumes. We never really find out much of what is going on. At one point, Who-fan Jennifer recalls the “wibbly-wobbly timey-wimey” catch-phrase of the David Tennant/Matt Smith eras, and that seems to be the centre of Million Eyes’ vision of time travel. One waits in vain for one character to turn to another and say “As you know, Carruthers, time travel works by means of…” Half-drawn characters appear, and then vanish; we shift from point-of-view-to point-of-view, and other equally sketchy characters turn out not to be who they seem. Even the famous History of Computer-Aided Timetabling for Railway Systems seems to be a red herring by the time you get half-way through.

And yet… and yet. This is the oddest book I’ve read for a long time, because the last few chapters take us back into what we’ve read up until then in a series of time-twists of great ingenuity. Things (at least, some things) fall into place. We understand the role of the agents who have been zipping up and down the timetrack and at least some of what the Grand Overall Design of Miss Morgan might be. Bits of the story that we thought were digression or melodrama or costume-drama come back to us, and large chunks of the plotline all come clear. We’re still no further in explanation or motive, and at one point we want to step outside the world of the story and find out just what is happening outside Million Eyes’ enclave, but Berry knows how to deliver a sucker-punch to his readers just when they least expect it. There’s clearly more to come in the next volume. It’s a risky strategy and I’m not sure if, overall, it works, but if you start this book don’t, don’t give up on it.
Posted by Djibril at 14:00