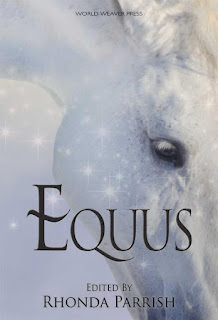 Equus is the fifth book in Rhonda Parrish’s “Magical Menagerie” series. One of the previous volumes in the series is Sirens, which I reviewed back in October, and I enjoyed that book enough to request Equus when it came out. This is a special theme for me as well; I have been a horsewoman for most of my life, and find these powerful animals both fascinating and beautiful. In addition, the rich variety of horse myths and monsters makes up a cornucopia of wonders. Almost every culture in the world have their equine legends or gods, from the Norse Sleipnir to the Scottish Kelpie to the Buddhist Kanthaka to the Hindu Uchchaihshravas to the Greek Pegasus to the Japanese Ama no Fuchigoma to the Chilean Caballo marino chilote to the Turkish Tulpar to the Central American Wihwin to the Philippine Tikbalang to the European unicorn… the fact that I could go on should tell you something. Myths and legends about horses and horse-like creatures are as old and as varied as human history, and provides a wealth of material for any aspiring author. Given that, I was eager to see what treasures the contributing authors of Equus had to offer.

And I have to admit, in that respect I was a bit disappointed. Of the 18 stories and one poem in this anthology, the majority of the tales feature variations of ordinary horses. There are five unicorns, two pegasi, two kelpies, and an implied centaur. In terms of divine horses and horse-related deities, there are two stories about Loki (bizarrely, both are about his descendants showing horse-like traits or attributes). That’s it. No Poseidon, no Epona, no Rhiannon, no Svantevit, no Hayagriva, and no Nuckelavee, no Pooka, no Longma, no Siguanaba, no Anggitay… it felt a bit like wasted potential, given the vast amount of material available. I was really hoping to see more variety in the stories and the creatures they described. This wasn’t akin to Sirens, which was about a very specific mythological creature from (arguably) one mythos; this is an animal found all over the world, in almost every culture, with myriad mythological beings based on it. The possibilities were infinite, and the results rather mundane.

With that small disappointment out of the way, is this a bad anthology? No, not by any means, though there wasn’t much of real novelty. “Neither Snow, nor Rain, nor Heat-Ray” by M.L.D. Curelas describes the adventure of a pony express-type messenger after a War of the Worlds style invasion. “The Last Ride of Hettie Richter” by Cat McDonald is of a young backwoods girl seeing an ill-omened black horse hiding in the woods, and the ending is a delightful subversion of expectations. One of my favourite stories, Diana Hurlburt’s “Eel and Bloom,” features a species of bizarre semi-aquatic, carnivorous equid that the heroine and her town tame and race.

It’s just that the aforementioned stories are the only ones that struck me as something new and different. It’s not that any of the others were bad stories, in fact I’d say all of them (with one exception) were quite well-written. It just seems like none of them had the novelty or took advantage of the aforementioned variety the way that I had hoped. Some of them even felt like the theme was an afterthought. K.T. Ivanrest’s “Lightless” seemed more about the politics of a celestial kingdom than about the nameless winged horses that run their chariot races. “Eli the Hideous Horse Boy,” by Michael Leonburger, doesn’t even feature a horse, just the deformed son of a supposed centaur. And in Stephanie Cain’s “To Ride a Steel Horse,” leaving aside the protagonist’s memories, the horse doesn’t appear until the very end of the tale. They were all good stories, don’t get me wrong, I just felt a little bit puzzled.

There was only one other story that left a really firm impression, and unfortunately, it was not a good one. Sandra Wickham’s “Different” tells the story of a mother bringing her daughter to a unicorn to be healed. The child’s affliction goes unnamed, but from the description it is very clearly Down’s Syndrome. The unicorn tells the mother that there is nothing wrong with her daughter, and therefore she cannot be healed. In principle, there’s nothing wrong with this idea. However, the execution of the story really fails, primarily because the daughter herself isn’t a character. She says perhaps three words in the course of the story, and has no defining traits whatsoever besides her disability. Except for the fact, of course, that her heart is so pure and full of kindness that she is able to touch the unicorn without being burned by her power, and “captures (the unicorn’s) heart” at story’s end. It’s the stereotypical depiction of the angelic and stoic disabled person, which I found more than a bit offensive. In addition, the story is clumsily written and includes a pretty gratuitous subplot about some evil, black-hearted cardboard cut-outs… I mean men… from the mother’s home village coming to kill the daughter for being a (gasp) freak. All of this makes the tale little more than the worst kind of inspiration porn, the kind that ignores the actual issues around disabilities and reduces the disabled person to an inspirational stereotype. At no point does the daughter have any agency, at no point do we hear about her wishes, and at no point does she do anything to define herself as a person. She’s there to teach her mother (and ostensibly us) a lesson, not to be an individual in her own right, and that really rubbed me the wrong way.

This isn’t a bad anthology by any means, but given the nigh-infinite amount of material there was to pull from, I really felt let down by the lack of variety here. The stories were, for the most part, well-written and interesting, but with a few exceptions there was little in the way of novelty to make them stand out. And the addition of one really rather offensive story really reflects badly on the collection as a whole. I did enjoy Equus, and I will be keeping it, but to say that I wasn’t a bit disappointed would be a lie.
Posted by Djibril at 16:05