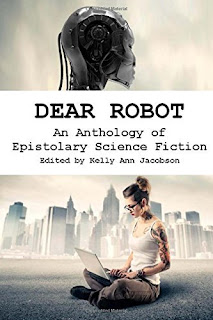 A marriage of science fiction and epistolary fiction appears to be an oxymoron; to merge that which alludes to romantic spirituality with visions of state-of-the-art technology, societies and relationships in silico may generate a feeling of awkwardness. Yet, there is nothing more misleading! Examples such as Keyes’s Flowers for Algernon, Herbert’s Dune and Meyer’s Twilight series prove that the fantastic allows itself to be imbued with literary influences bequeathed after the era of Romanticism. The chimera of The Sorrows of Young Werther should not be dreaded though, as each of the novels, remembered for its more or less insightful probing of the characters, has forged a unique bond with the readers. Kelly Ann Jacobson’s book, Dear Robot: An Anthology of Epistolary Science Fiction, is no exception to this pattern.

Offering nineteen stories by authors in varying degrees of recognition, Dear Robot is far from amplifying the woeful cries of the brokenhearted. Indelible to the style of the original Romantics, the anthology transports the essence of the epistolary fiction through time and space, assuming a variegated approach to the forms utilized. From stories written as an exchange of e-mail messages (Serena Ulibarri’s “Fun(draising) With Meteoroids,” Bruce Markuson’s “Al’s Robot Repair”), and chat-stylized correspondence (Kate Lechler’s “Selections From the Intergalactic Encyclopedia of Habitable Planets”) to a more frequently-encountered journal (Tabitha Sin’s “Sleep Forever”), the reader is swarmed with possibilities that widely prove the epistolary fiction meets the contemporary perception of the future.

An experiment of sorts is the kernel of the opening story, “Nickerson Interstellar Student Exchange Behavioral Contract” by Tara Campbell, which explores the trials and tribulations of the student exchange program. The challenge of the intercultural interaction seems to be even more daunting, as the guest visiting Michigan for the duration of the academic year is of extraterrestrial descent. Worded as a contract between the parties—the alien, Gleeb, and his/her (the text does not specify the sex of this sentient being) earthly hosts—the text delineates the basic rules of mutual interaction. Much to our surprise, the expected formality of style is banished from the orbit of the document; in lieu of diplomatic intercourse, a more lax attitude is assumed as the hosts’ statement boldly proves: “We don’t really like the word ‘rule.’ All of these points are mostly guidelines, but the first couple are pretty important” (p. 7). The amity of approach, and an outburst of positive feelings radiating from a seemingly official document may shock even the most pokerfaced of aliens in the universe, let alone distance-oriented humans on the planet Earth. The hilarity of tone and the skillful comedian-like representation of the possible-to-be-breached areas, outlines the story of an intercultural contact in ways more vivid than a traditional short-story/novella narrative.

The scenario pictured in the text defies the modest conventions of the first (or the second, third etc.) contact which either results in the clumsy tiptoeing of the mutually blindfolded races (E.T.), or ends up in the catastrophic showcase of forces (Watts’s Blindsight or Aldiss’s Dark Light Years). “Nickerson Interstellar Student Exchange Behavioral Contract,” on the other hand, out-weighs both outcomes in a simple “Please don’t hide your feelings because […] we’re family now!” (p. 8) exclamation. All side-effects of the first contact disharmony (entering the hostsister’s room without permission, burning out the neighbor’s house or appliances, linguistic and body language misunderstandings) have been accounted for in advance. With the hosts speaking through the texts, a general image of the alien being unravels without the need of introducing them as a living character into the narrative. This, apart from the form of representation, constitutes another proof of the author’s deftness in writing. Closing the narrative is the set of final conditions that come in lieu of an open ending, leaving the space for all parties to sign for the further chapter of enjoyment.

What if disillusionment is all that awaits us in the end? “For a long time I’ve loved not even you. This no doubt comes as a shock, but are you as surprised as you expected to be?” (p. 11). The first lines of Rafael S.W’s “Good Article” are a potent example of how cruel the first-person narrator may be with regard to the object of his love—quite literally an object as the addressee is clearly of mechanical progency. “We have been poorly-made partners for quite some time […]” (p.11), the author admits in his elaborate outpouring of feelings. His monologue is a mixture of praise and scolding springing from eroticism, a colorful reminiscence of his relationship with an automobile: “[…] the newspapers cried out that there was something perverse, even ‘dangerous,’ about our coupling” (p.12). As the narrator’s memories become more intense in their sensuality, one can have the impression of the rotor accelerating in anticipation of the ultimate bliss the narrator seems to fathom. Following the narrator’s obvious arousal, the reader can be surprised at how easy it is to reach the oneness of thought with the protagonist, and merge with the piece of technology he devotes his feelings to.

A romance with non-human objects/beings, if not obsessive, can also be a destructive one. A hilariously-written epistolary story by Llanwyre Laish, “Dodona 2.0”, is a record of the correspondence between Favus XIV, the ruler or the eponymous planet, Dodona I, and The Imperial Majesty residing in the Earth sector. Being granted a rather unwelcome gift of seventy-five LeeSmart gardening robots, the government of The Interstellar Grove of Druids is determined to return them to the sender. Skeptical of the presence of technology, the druids’ terror becomes more haptic as the robots perform a drastic terraforming operation on the previously intact habitat. In the face of such an obvious tragedy the language of the correspondence becomes a source of absurdity, causing giggles to erupt spontaneously from the reader’s throat. Full of metaphors, litotes and hyperbolae, the messages remain usually ignored despite their alarming frequency and content. The mixture of scoldings and complaints camouflaged as praise is getting more and more fervent without the loss of diplomatic savoir-faire. Neither a plain word nor an insult is smuggled in this awkward communication which is both a kernel of the grotesque and a source of unlikely reactions on the part of the readers.

A more morbid touch on destruction can be found in Tabitha Sin’s “Sleep Forever,” which, in contrast to many of the stories encased in this anthology, is one of the most painful and human ones. Devoid of robotic intervention, the narrative surfaces the account of the personal tragedy unraveled on the pages of the protagonist’s journal. Patient #HMI000479, as she is identified in the course of the study, is the person admitted to the experimental test program designed to alleviate symptoms of insomnia and depression. Subjected to a controversial drug therapy, she reenacts the tragedy of her brother’s demise in the ocean, submerging herself in the waters of her guilt-ridden mind. Scrutinizing the most intimate and painful of feelings defining the human condition, Sin’s story constitutes the most reflexive narrative in the collection, and the most non-robotic one.

Regardless of the story, its contents and tone, practically all of the texts presented in Dear Robot offer a quick and mostly enjoyable read. This effect is achieved through the conciseness of the text (exchange of e-mail, messages and chats), and the limited number of issues discussed by each of the narratives included. A rather uncomplicated delivery of the stories, often sprinkled with humor, absurdity or the grotesque, creates an impression of undemanding reading which alleviates the seriousness of the problems the texts revolve around. Such an approach, although widely cherished by the readers, may turn out to be detrimental to the reception of the content of the stories, dissuading them from taking a more reflexive stance toward the narratives read.

The homogenizing nature of the stories, joining the proton of entertainment with the neutron of critical concepts, inscribe themselves into the tradition of pop culture, allowing the vigilant to get through the reaction of both parts, and reach the final essence. As the element of in silico has long transgressed the boundaries of science fiction, the stories in Jacobson’s Dear Robot anthology constitute an ample opportunity for readers to savor the well-trodden issues and forms in a completely new and surprising way. These features combined make the collection worthy of reading. Dedicate the first one for pure enjoyment of form, and all the rest for the benefit of your mind and soul.
Posted by Djibril at 17:01