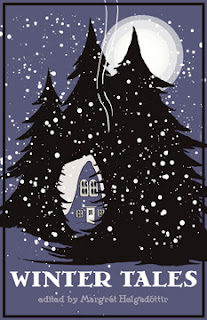 A thematic collection of stories and poems by little known writers, Winter Tales includes (mostly) dark fantasies with folkloric elements. Editor Margrét Helgadóttir is a Norwegian-Icelandic writer and editor, writing in English, and author of The Stars Seem So Far Away (2015), a collection of thematically linked short stories, set in a post-apocalyptic Earth, whose survivors have fled to the poles to escape ecological devastation. Prior to Winter Tales, Helgadóttir co-edited two thematic collections of art and stories, European Monsters (2014) and the BFA-nominated African Monsters (2015), all of which are published by Fox Spirit Books, a small press that favors “weird noir” fiction. Winter Tales employs winter cold as what Stephen King called the “phobic pressure point” (Danse Macabre). Winter Tales, in this reviewer’s opinion, is weakened by several stories that fail to resolve fundamental problems raised by the plot.

In too many cases, characters lack clear motivations. The respective protagonists of Tim Major’s “Winter in the Vivarium” and Lizz-Ayn Shaarawi’s “Snow Angel,” for example, are driven to murder, but for unknown reasons. Both stories take place in a near future of prolonged winter, though neither explains what precipitated global cooling. Like other Winter Tales stories, these two have promising beginnings, but lack follow-through.

In “Winter in the Vivarium,” a new “ice age” separates humanity by social class. Like the Morlocks in Wells’ Time Machine, an underclass of hunter-gatherers maintains the machinery that supplies heat and air to the Vivaria (sealed habitats), where the idle rich live. While servicing a Vivarium’s heating and air conditioning system, Byron sees several realistic human ice statues outside the windows. Though he frantically destroys them, the statues mysteriously proliferate. Finally, for reasons never elucidated, Byron sabotages the Vivarium’s air ducts, bringing death—or at least winter—to the elites inside. Where did the ice statues come from? Why is Byron intent on destroying them? Why does he sabotage the Vivarium? “Winter” never explains.

“Snow Angel” begins and concludes with the same provocative statement: “It would be wise to remember that humans haven’t been on the planet for very long, relatively speaking. Creatures have come before, risen and fallen, and more will come after” (71, 75). The narrator is an alien resembling a human female, living on earth as self-appointed guardian of a pristine wood. She is angered to discover the camp of a student, doing research on the evolutionary adaptations of woodland creatures to prolonged winter. Pretending to seduce him, the narrator sucks out the student’s essence, then exhales it to form a bed of flowers. At the end, she then “drift(s) apart… in a flurry of flakes” (75). Like “Winter in the Vivarium,” “Snow Angel” leaves the reader puzzled. Where did the narrator come from, and why does she destroy a man who obviously respects her woods? Both stories are maddeningly enigmatic.

Again and again, in Winter Tales stories, characters act with, or are subjected to, cruelty that seems gratuitous. Though suffering is intrinsic to horror as a genre, in the best dark fiction, pain leads to some insight—on the part of the sufferer, the perpetrator, and/or the reader. Too many of the very dark Winter Tales stories lack subtext: the depiction of a character’s torment seems an end in itself. In Verity Holloway’s “The Frost of Heaven,” for example, an artist and former monk murders a young seminarian in order to make a wax statue of Saint Francis from the corpse. Lacking the transgressive fun underlying the similarly themed film House of Wax (1952), “Frost” merely inspires revulsion. In K. N. McGrath’s “The Siege,” Russian orphan Nastasya scavenges for food in a frozen city besieged by Nazis. A man with a bandaged face gives the child grenades, urging her to “Kill the Fritz. Kill them all” (168). In Mat Joiner’s “The Frost Sermon,” Dromgoole, a puppeteer, stages a story in which Jack Frost (winter) defeats the Green Man (spring). Traveling from town to town, Dromgoole murders spectators, using their frozen bodies as puppets. In these and other Winter Tales stories, the “implied author” (Wayne Booth, The Rhetoric of Fiction) fails to place suffering or sadism in any moral context.

The good news is that two Winter Tales stories are both upbeat and enjoyable. “Cold-Hearted” by G. H. Finn is a zany tall tale. “When the Trees Were Enchanted” by Masimba Musodza is, by any measure, an extraordinarily fine work of fiction.

In “Cold-Hearted,” Hermione is socially marginalized after losing her legs in an accident. Among her mother’s friends, only Uncle Bob treats the lonely adolescent with respect and kindness. On the eve of Uncle Bob’s departure for Australia, Hermione sees her elderly neighbor Grýlja impale Uncle Bob with a garden fork. Hermione resolves to kill her. During their confrontation, Grýlja reveals that she is an Ice-Maiden from another world, pursued by a Skrymsling, a shape shifter that had assumed Uncle Bob’s form. Though Grýlja had immobilized the monster, Hermione inadvertently brings it to life. During the ensuing battle, Grýlja gives Hermione a fur coat that turns her into a polar bear. Together the two women cut the monster in half, sending the head and one arm to the winter world. At the end, though living in a society that demeans the disabled, Hermione is empowered by her magic coat and supernatural friend. Editor of a collection of Orkney folk tales, G. H. Finn creates a delicious parallel world populated by folkloric beings from Old Norse legends: Ice-Maidens, Frost Giants, Snow Ettins, and the Skrymsling. A witty romp with a feisty heroine, “Cold-Hearted” is a welcome treat.

Far and away the best story in the collection, “When the Trees Were Enchanted” is set in a Zimbabwean expatriate community in Yorkshire. Culturally bilingual, Tony Chiweshe manages a successful public relations firm. He and his “White English” wife, Taylor, are deeply in love, though her environmental activism threatens his livelihood. Taylor has been arrested for photographing a grove of oak trees, about to be cut down for a housing development. Tony rescues his wife from the police station. Shortly thereafter, he frees his Zimbabwean aunt from an immigration detention center. Although Mai Tapiwa’s pretentions to being a shaman embarrass Tony, she comes to live with the couple. Committed to saving the sacred grove, Mai Tapiwa and Taylor lead their Zimbabwean neighbors in a bira, an invocation of ancestral nature spirits.

“When the Trees Were Enchanted” is both culturally astute and humane. This story takes place in a near-future Britain whose social institutions have become, subtly, more xenophobic and materialistic: immigrants and dissidents are jailed, the legal system favors business enterprises, and Christmas is outlawed. Tony’s and Taylor’s mutually supportive relationship, as well as Tony’s careful navigation of a society that plays by alien rules, are heartwarming and utterly believable. In the Zimbabweans’ triumph over soulless capitalism, the author celebrates the resilience of the human spirit. I shall definitely seek out Musodza’s other fiction.

Though “Cold-Hearted” and “When the Trees Were Enchanted” engage 21st century social problems, other Winter Tales stories have an oddly retro feel. Though set in intriguing fictional worlds, the majority of stories fail to engage 21st century society and ecology. Furthermore, unresolved plots, poorly motivated characters, gratuitous unpleasantness, or clunky style mar many Winter Tales stories, and taken as a whole, this collection seems amateurish. However, although this anthology did not live up to expectations, two outstanding stories will stay in this reviewer’s imagination.
Posted by Djibril at 17:48