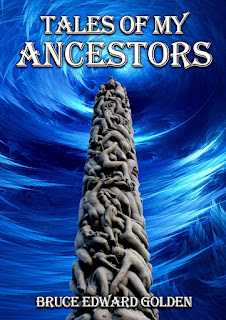 What is it that makes a book unique? Is it the quirky nature of its characters? Is it the plot—the basic storyline? How many storylines are really “one of a kind”? Sometimes it’s the tone of a book that makes it stand out. Sometimes it’s a distinctive writing style. In the case of Tales of My Ancestors by Bruce Edward Golden, it’s the basic concept which makes it unlike any other book. On the surface, Tales of My Ancestors is a collection of historically based short stories ranging from the 10th century to the 20th. Though primarily historical fiction, each tale has a hardy helping of fantasy or science fiction—Golden’s usual genre. But there are a number of books that combine historical fiction with speculative fiction. That’s not what makes the book unique. The crowning touch (literally “crowning” because some of Golden’s ancestors were actually kings) is that each story features at least one of his direct ancestors (a great, great … grandfather or grandmother). I’ve searched, and can’t find a single book with all three of these elements. If for no other reason, that makes this volume as singular as you can find.

The first story in the book follows a Virginia teenager who, against the wishes of his slave-owning parents, lies about his age to join the Northern Army and fight against the South during the Civil War. He will become part of a cavalry unit which frees a slave who is often referred to by historians as the “black Mark Twain.” This tale combines the young recruit’s brutal introduction to war with the slave’s dry wit and observations on slavery. On the surface, this is a seemingly simple narrative, but lying below that surface are more subtle observations about the nature of mankind.

Another story, perhaps the best of the bunch, follows one of Golden’s ancestors through the Salem Witch trials. There are no actual witches here, only the darkest corners of humanity. The only bit of fantasy arrives when Satan pays this ancestor a visit—literally playing “devil’s advocate” to the folly of the trials. In its culmination, we learn that one of the men hanged during the trials was a cousin of the protagonist—a blood relative of the author (though not a direct ancestor).

On a lighter note, I really enjoyed Golden’s satirical but sexy take on the Robin Hood legend. In this version of the story (which leads up to the signing of the Magna Carta), King John (Robin’s usual nemesis) summons a demon to help him secure the young girl he’s become obsessed with, but the demon is less than cooperative. He mocks the king at every opportunity, while Mr. Hood dallies with both Marian and a willing wood nymph.

I can’t say that all of the stories are winners, but that’s typical of any collection. For instance, I thought the tale about Lord Baltimore and the Irish banshee was a bit pedestrian. The historical details were interesting, but the storyline itself was nothing I haven’t read a dozen times before. I will say that each of the stories, despite a few mundane plots, are well-written, and each is different from the others. While some are derivative, they’re all fairly easy reads (despite some uses of Old English for setting of the milieu), and executed in a beguiling manner.

The tales are not in chronological order, so as you read you bounce around from one time period to the next—one culture to another. I kind of enjoyed this, as opposed to just traipsing straight along an historical timeline. On this imaginative trip through time, there are a number of fantastical beings Golden’s ancestors must deal with, including a mermaid, an imp of Hungarian legend, creatures of Native American lore, and a pale horse of death which transcends time to plague four different ancestors. They will also cross paths with time travelers, demons, and aliens, while learning how Shakespeare might have come up with the idea for one of his most popular plays.

As much as with the crisp writing and true dialogue, I was impressed with the depth and thoroughness of the research Golden must have had to conduct to put this all together. Each tale is packed with historical details that really set you down in the time and place of his choosing. I was also intrigued by the number of historical figures Golden is directly related to, from English kings to French dukes to the earliest American settlers (though in his Author’s Note, Golden states that he takes no particular pride in such connections because, as he learned from his extensive research, millions of people living today are likely direct descendants of, for example, someone such as Charlemagne). That said, he gives equal time to ancestors who were not so well known—servants, military grunts, craftsmen, farmers, and a postman who died in the line of duty.

Golden’s dry sense of humor and penchant for satire are at their best when he good-naturedly pokes fun at some of his more pompous, well-bred ancestors, and champions those of more humble origins, whose cleverness, pluck, and courage enable them to rise above their seemingly pre-ordained stations in life, in classic underdog-prevails fashion. He pays serious homage to heroic ancestors and deals with others, flawed as they may be, openly and honestly in perspective to the period in which they lived.

Tales of My Ancestors is a collection of stories not only about bloodlines, but about the family unit, and how chance and synchronicity unites them over and over again across the ages by way of the most seemingly unlikely and unusual events. One example of this, are the four separate narratives about the Calvert family. They tell how George Calvert suffered from religious persecution as a boy in England during the Catholic/Protestant struggles, and how, after he became an adult, he was determined to establish a colony in the new world where religious freedom was the law of the land. We see, in a separate tale, that even after he dies, his son carries that dream across the ocean to establish the first colony in what would become Maryland. In yet another story, more than a hundred years after George Calvert was born, we find that his grandson is still dealing with religious strife in America.

Overall, I found Tales of My Ancestors to be well-written, engaging, historically fascinating, and a nice mix of thought-provoking adventure, humor, fantasy, and science fiction. A couple of its 18 stories were too simple for my tastes, but I still highly recommend it because of its unique concept, and, for the best reason of all, it was a compelling page-turner that always kept me entertained.
Posted by Djibril at 17:00