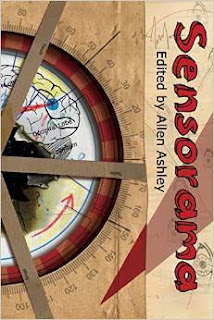 Sensorama’s twenty-one original stories, mostly by British contributors, extrapolate changes in the human (or humanoid) sensory apparatus. Though he does not describe the book’s origins, editor Allen Ashley must have given would-be contributors a writing prompt: What if touch, sight, taste, smell, or hearing were augmented, blocked, or altered? Set in the near future, Sensorama stories have no alien extra-terrestrials. With three exceptions, discussed below, characters are human beings like ourselves.

The protagonist of Mosses’ “Stone” is a modern-day Medusa, posing as a sculptor. Because her lovers always lift the veil covering her face, Medea is plentifully supplied with erotic statues. To Medea, the people she encounters are incipient stones: “Many up here resemble hard granite,” Medea thinks, “perhaps pink or grey, flecked with shiny shards of mica, forged in the heat of the earth. Occasionally I meet someone of sandstone, blonde like the buildings, formed by the metamorphosis of one substance into another… I’ve never met a diamond, cut or in the rough” (25). If Medea were a mere mortal, the reader might expect a lover or detective to thwart her. Since, however, Medea is a creature of mythic cycles, the story concludes with yet another lover insisting on seeing her face.

Set “during the second quarter of the 21st century,” David Turnbull’s “The Sound Cyclones” takes place in a Europe devastated by war. Rogue states, seeking to secede from the European Union, have developed a weapon: “a magnetic field that drew to it all audible sound within a half-mile radius” (216). Early in the conflict, a Sound Cyclone deafens the soldiers in Tash’s unit: “Then in an instant it was upon them and they were suddenly hearing a wild cacophony of random and arbitrary sounds—the chinking of cutlery and coffee cups, the tribal chanting of a crowd at a football match, screaming heavy metal guitars interlaced with snatches of classical music and operatic arias, the pounding of a pile hammer, the roar of a jet engine, the banshee wail of a siren, the dull thud of distant artillery, the clamor of church bells” (217). Now out of control, Sound Cyclones rage across Europe. To diminish the random noise that augments them and to protect those who still can hear, cities have adapted: “Subtitles in cinemas and for television broadcasts had become standard. The use of heavy machinery was subject to prohibition. Live music was a thing from the golden heyday of a nostalgic past. Dogs had been systematically culled to eliminate the risks posed by their barking” (218). Turnbull’s deeply sympathetic protagonist, Tash, has found a job in which deafness is an asset. When Sound Cyclones approach Barcelona, she patrols the streets, ensuring that citizens are in soundproof shelters.

E. Lillith McDermott’s “Going Dark” also concerns a female veteran, damaged by military service. To equip Marta for battle, military surgeons implant a computer in her brain: hearing, sight, and smell are enhanced; touch and taste (useless in combat) blocked. Unsuccessful in adjusting to civilian life, Marta concludes that reenlistment is her only alternative to suicide. In the end, Marta finds that the government’s exploitation of veterans is even crueler than she had thought. “Going Dark,” of course, alludes to a heartbreaking contemporary problem: the military conditions soldiers to be effective killers, but fails to undo that conditioning when they return to civilian life.

While most stories focus on the recognized five senses, several feature some type of extra-sensory perception. When, for example, Thea, a shy archivist, in Kelda Crich’s “Wide Shining of the Remote,” processes a collection of theosophy books, her “third eye” opens, “allowing for the interchange of thoughts” (163). Now able to glimpse the past of people she touches, Thea recognizes and defeats a murderous stalker.

In an exceptionally original, poignant story, T. J. Berg’s “Watching the Ashbless Bloom,” a stage magician experiences “a tingling itch” when a deadly parasite appears in the city. When he senses a “worm,” Theodore joins his “Worm Crew,” rushing to destroy adult worms and their human victims (“berserkers”), who spread infection by attacking other people. Though the city’s ecosystem is quirkily alien—“little rubbish beasts,” addicted to nicotine, swallow discarded cigarette butts; Ashbless trees release “unripe bladders” that “burst into flame”—society is recognizably human and contemporary. Ignoring the research findings of urban ecologists, the government blames impoverished Muslim immigrants for introducing the worms.

“Maneater” and “The War Artist” both feature future humanoids with sensory apparatus different from our own. In David Gullen’s “Maneater,” a band of gender-neutral post-humans colonize a planet, placing its stone-age inhabitants, the “Onca,” on a reservation. The aesthetic sensibilities of these post-humans are so acute that they find beauty “a near intolerable distraction.” Paralyzing his pursuers by leading them to—then cruelly destroying—a beautiful “angel sloth,” an Onca male escapes the reservation. In Tim Nickels’ “The War Artist,” Monksilver, an artist, is tried for genocide. Monksilver has caused the death of thousands of a new species: telepathic beings, lacking sight, taste, hearing, touch, and smell, who live among glaciers and propel themselves across the ice like seals. Though “The War Artist” is complex and enigmatic, disorienting the reader by jumping among different times and places, Monksilver apparently has decided that a people incapable of art must be annihilated: “A real artist knows when to erase, when to wash the canvas clean” (270).

Though playfully written, Jon Michaeal Kelley’s “A Mimicry of Night” has a serious ecological subtext. Kelley’s loathsome protagonist, Dario Frey, creates artistic compositions from the wings and carapaces of rare insects. When the artist and an entomologist friend touch a mountain cicada, it attacks them with sensory hallucinations. The two men become temporarily blind, hear ferocious growling, and smell butterscotch. Though the mutant cicada’s unique form of camouflage temporarily defeats its human despoilers, Dario (apparently) exterminates the new species when he sets fire to the trees where he found it. Kelley’s story exemplifies our unthinking and ultimately self-destructive exploitation of non-human creatures.

One of the most delightful stories, Rhys Hughes’ “The Taste of Turtle Tears” is not a work of speculative fiction but an animal fable. “Taste” begins as a mock natural history: “There are certain kinds of butterflies that live exclusively on the tears of other animals.” Far from the sea, butterflies in the Amazon rainforest obtain sodium from the tears of larger animals. Since “the tears of the yellow-spotted river turtle are the saltiest and most nourishing of all,” the butterflies make turtles cry by flying in formation: a succession of pictographs tell the turtles stories, making them shed tears of sorrow or laughter. Eventually, the butterflies come to rely on “a highly organized and superbly disciplined troupe, of professional actors” (98), who inspire a predictable emotional response in the turtles and, therefore, a steady supply of tears. The butterflies are sustained—literally—by the audience’s cathartic response.

While Sensorama includes more exceptional stories than there is space to discuss here, I have two serious criticisms. First, while almost all the stories are stylishly written, intelligent, and humane, a handful profoundly offended me. In a collection devoted to the senses, one might expect gross-outs. A few stories, however, are not merely disgusting but gratuitously sadistic. These deliberately generate sympathy for a character, then, with no thematic justification, subject him or her to disgusting cruelty.

My second criticism regards Ashley’s decision as editor to omit any introduction either to the book or the authors. Though most of the contributors are little known, especially to American readers, Ashley opted not to include an introduction that places the collection in some context, nor provide individual stories with headnotes or afterwords. To track down a contributor’s other writing, the reader must google. Though the book ends with twenty-one-word “Author Biographies,” these are maddeningly brief. I wanted to know more about the occupations, nationalities, and interests of contributors whose stories enchanted me. Since Ashley lists himself as the founder of the Clockhouse London Writers group, I wondered whether other contributors were also part of this consortium. Did Clockhouse invite its members to write stories about the senses? Does the group plan future thematic collections?

Despite these reservations, I urge lovers of speculative fiction to seek out this exhilarating collection. Rich in subtexts, the best stories are metaphors for contemporary ecological and social justice problems. Sensorama introduced me to exciting writers, many at the beginning of their careers, whom I would not otherwise have encountered.
Posted by Djibril at 15:44