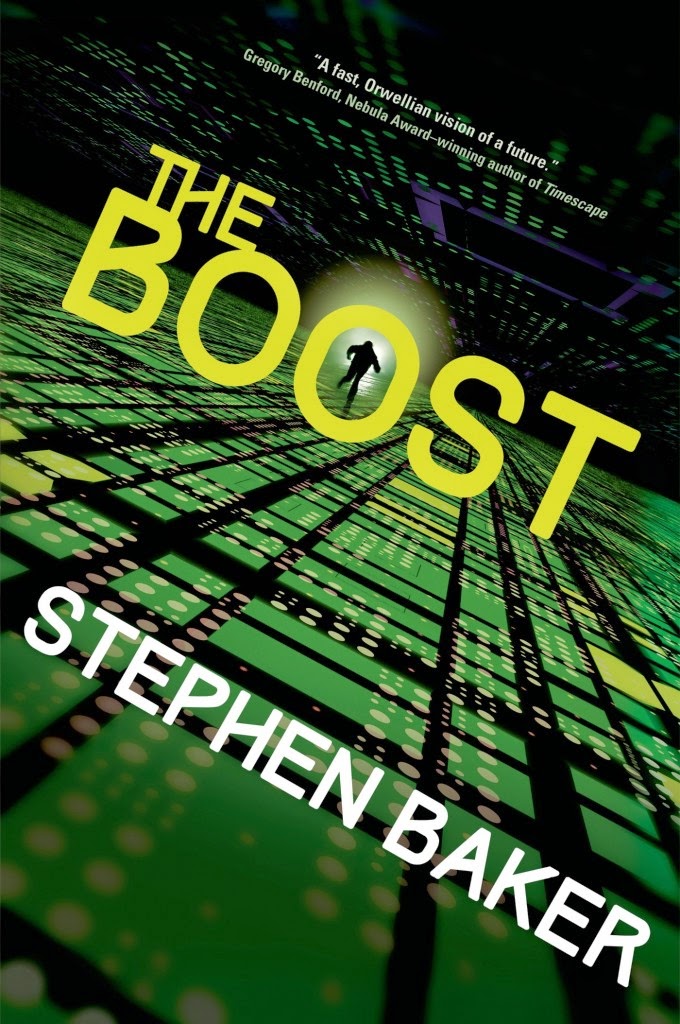 The Boost by Stephen Baker is a science fiction thriller, delving into how society could change if everyone was always connected to the internet—or something similar to the internet: an intricate network accessed by brain-implanted chips. In this world, ‘wilds’ are those who have chosen—or have been forced—to live outside of the network. The boost offers individuals non-stop access to information and virtual reality, augmenting their real lives with a super-enhanced version of the internet. But underneath the veneer of a technological utopia is a risk few expect: The Chinese have included special code in the Americans’ boost code, which could leave the world without any privacy—and worse. When Ralf, a software developing prodigy, tries to protect society from the new code being uploaded into boosts all around the world, he’s caught and his boost is ripped out of his head. Forced to live as a wild, he must join with those who share his dilemma, not only for his sake, but for the freedom of everyone using the boost. The boost is an interesting take on a thriller novel, marrying dramatic excitement with social and political issues relevant to a world dominated by virtual reality.

Before I begin my actual review, I want to point out the circumstances surrounding the reading of this novel—this isn’t something I usually do, but it’s relevant to my mindset in how I read the book. A not-so-long-time ago, I was seated in an airport in the wee hours of the morning, long before the security gates were opened. It was an abandoned place, with a few sleeping fliers who were waiting to fly abroad. The place was empty; for something the size of an airport, it was disconcerting.

In the world of The Boost, places like the empty, desolate airport were at high risk of being the true reality. After all, why do most people need to fly when they can escape the world they live in through their boost? They don’t need to vacation—they can go into the virtual realities offered by their boosts and travel anywhere in the universe. People travelled still, but I couldn’t help but imagine that the world of the boost and my world, for one brief moment of time, intersected. It made me think. So, if you do read this book, and you have a chance, I really recommend that you read it in a quiet place that has the memory and feel of a lot of people, but in reality is empty. It definitely enhanced the experience of reading this book for me.

Now that I’ve detoured, back to the book. The Boost by Stephen Baker was a good read. Not a perfect read, but quite entertaining. It was flawed, but the flaws I perceived were do the fact that I felt the book could be that much more. There are several elements I want to discuss with this title, but I’ll open with the plot, as this is the founding structure of the book.

Ralf meant to save the world—and his countrymen—when he meddled with the update code of the boosts. But instead, his link to the virtual realities and the internet were forcibly removed from his skull. By attempting to close a major security and privacy breech, he meddled too much, and paid the price for it. Fortunately for our main character, he managed to escape, with some help from an interested outside party. This begins Ralf’s journey, and in it, he learns what it is like to be a man in a world where people have forgotten to be themselves due to their ability to live new lives in their boosts.

The thriller elements come from the fact that there are those who wish Ralf hadn’t escaped, and want him (and his boost, which is missing), for themselves. There are also thriller elements in the battle between the wilds and those with boosts. Of all of the weaknesses in this novel, the thriller element was one of the things I wished had been more enhanced. If you have no patience for lag in your thrillers, this book will bother you—and not because of the interesting socio-political elements woven throughout it.

Another thing that readers should be aware of before diving into this book is that it jumps around a lot. While the plot itself is fairly simplistic as far as thrillers go, it’s the constant jumping around as the author tries to marry the thriller element with the socio-political elements that really hurts this book. (And despite this, I still consider this a solid 4* novel.) So, be prepared for that as you go into reading this book.

Since I’ve mentioned it a lot so far, it’s time to get to the heart of this book: the socio-political speculations. This is what really makes this speculative fiction. Baker does one thing really well—he touches on what life would be like if the Internet was so much more than it is now. Through the use of brain implants, he pursues what life would be like if we lived in a world where our physical bodies came second to our virtual ones. Technology has progressed to a point where someone can become anyone—women can choose to become a Goddess-like beauty, like Athena. The Athena models are women with the perfect physical form. And thanks to technology, any woman (should she have sufficient money) can become Athena.

The same applies to men as well. And the ability to become someone new isn’t restricted to the physical. Avatars in the boost’s virtual reality fit each individual’s whims. Meeting in the flesh is much like asking someone to marry them—it’s a huge step. Marriage does still exist in the world, but physical associations are much different than what we know today. Most people fall in and out of love in the various virtual reality spaces.

Society and its infrastructure have changed due to how people use their boosts. Most cars aren’t driven; they’re controlled by input from the boosts. Watches are no longer worn because people can use their boost to check the time. There are so many little elements and things Baker has paid attention to that make this book really work. The real problem is that Baker didn’t leave enough time for these things to come to life as much as they could. The thriller elements and socio-political elements just don’t tie together as closely as they could; as often as not, one element is pushed to the side while the other is explored. I really hope the prequel, which is currently being written, addresses this issue—because if it is, Baker could easily become one of my favorite authors.

Before I leave you, I want to go into more depth into the specific relationships of the characters in the novel. Relationships are often what make books tick, and when the thriller elements of the novel aren’t taking front and center stage, there is a lot of interesting things going on with the characters.

Most importantly, I want to discuss sex. Sex is focused on a reasonable amount in this book—a little more than I generally feel comfortable with because I can be a bit of a prude, but less than my overall threshold. There’s no real explicit sex, but it’s definitely a star of the book—because how people have sex is a notable factor in how society works. As a general rule, people find more enjoyment from sex in the virtual space than the physical one. And this stance really makes sense—virtual reality allows each individual to use their imagination to its greatest extent, and people can get really creative when it comes to having sex. This makes meeting face-to-face a lot more stressful to people than in normal circumstances, especially when it comes to sex. Touching was a big deal—as were all of the physical cues humans give to each other.

And when I finished the book, it left me wondering what else would change about society if virtual reality replaced reality. That alone made this book well worth the read. But still, I will sit here and wish that the thrills had been more thrilling for me, and that these socio-political issues had been more closely tied to the plot of the story. If that marriage had happened to perfection, then this would’ve easily been one of my most favored books ever.
Posted by Djibril at 18:19