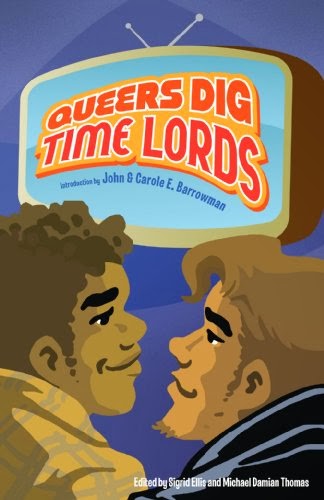 This conversation doesn’t disappoint, as it pulls together a strong ensemble of self-identified queer sci-fi writers such as Tanya Huff, Amal El-Mohtar, Brit Mandelo and Rachel Swirsky. A particularly striking aspect of the collection is the centrality of personal narrative, a response that reaches beyond fandom, or perhaps reaches inward, to the heart of fandom’s existence. In conversation with one another, these essays provide a textured look at queer fandom and at queer consumption of pop culture that differentiates it from geek culture, simultaneously embracing, analyzing and rejecting that culture.

The conversation goes something like this:
In the piece “Nice TARDIS,” Jason Tucker says that as a gay nerd seeking community, he encountered more than one closet to come out of, including a “geek closet” when he was in the gay community; fandom provided him with a queer-friendly space to geek out and be himself (and more). “Meeting and falling in love with each other is kind of the Holy Grail for gay geeks.”

Tucker’s assertion that many fans are queer (actually, he says gay men) is shared by Susan Groenewegen in her essay, “The Incredible True Adventures of an Intellectual Fan Dyke.” Groenewegen says, “Queers are outsiders, different. Perhaps that’s one of the reasons why so many Doctor Who fans are gay. Not in a causal sense, but in that sense of recognizing and celebrating difference. Of being a safe space for those who’d otherwise be outsiders.”

Podcaster Erik Stadnik, in the essay “We’re Here, We’re Queer, Rate Us on iTunes,” counters the question of “Why so many gays?” with “Why such limited representation?” “Why should a fandom that’s so queer there’s literally a book about it,” Stadnik asks, “have such poor queer representation in one of the most burgeoning areas of fandom?” His answer in regards to fan podcasting is dilution. “The sheer number of new fans, especially young straight fans, has diluted the gay element of fandom.”

A clear theme through many of these essays is identification with the outsider. Doctor Who is an increasingly mainstream product in popular culture, but this was not always so, and fandom has felt like a smaller, safer space.
In “The Monster Queer is Camp,” Paul Magrs says in the “very butch” action-movie era of the Eighties, his “hero wore ruffled shirts and bow ties. Cravats and floppy scarves. Regency frock coats.” The show’s colorful sets and clothes, witty banter and outrageous monsters and villainesses made it appealing to him, as did what Magrs calls the “parodic sexism” and the Doctor’s asexual behavior. The lack of heterosexual imperative between main characters came as a relief.

Cody Quinjano-Schell’s “Mutants, Monsters, Mutts and Mentiads” recalls the reveal of supposedly terrifying creatures Thals as “about as queer as you can get” with their campy and “fabulous” hair and makeup. Mutants, disgusting creatures and those with misperceived illness feature prominently on the show, often with story lines of transformation and acceptance, an welcome and affirming narrative to gay youth seeking belonging.
John Richards (co-creator of the Australian gay geek series Outland, which contains one “coming out” story line about a character outing himself as a Who fan) lauds “safe haven” created by the absence of heteronormative sexual relationship and story in Doctor Who. “It was just absent,” he says, “open, a gap.” Like Magrs, Richards is glad to have relief from relentless romantic and sexual themes of popular shows like Star Trek (this sentiment is shared by others in the collection, including Naamen Gobert Tilahun). Richards also astutely observes that openly gay characters in the franchise reboot drew protest not due to an overabundance of gay characters, but because the new show is so overtly heterosexual. In spite of howls about Davies’ homosexual agenda, Richards says, Davies isn’t a hero. The gay mortality rate is high and treated in an “off-handed” manner, and the show has shifted into one “about heterosexual couplings and magical babies” under Moffat, his Doctor “a straight man with a straight girl in a straight, straight world.”
The collection of essays contains a near-universal appreciation for the bi-fluidity of Captain Jack Harkness and a nice number of bi-focused pieces.

In Huff’s essay “Bi, Bye,” the prolific writer expresses her joyful discovery of the ninth Doctor’s acceptance of bisexual/pansexual Jack and what that acceptance means retrospectively. “Because the Doctor has been shown to be open to the idea, we can now look at every single one of his reactions through bifocals.[emphasis mine].” Tired of complaints that queer fans are constantly fumbling for subtext, Huff says “the section of the fourth wall labelled queer sensitivity has been broken.” Queer fans can now perceive a clearly “‘me-shaped door’ that lets them into the story.”
I appreciated finding a “me-shaped door” into this book, as Tanya Huff says, with the inclusion of bisexual-themed essays, and maybe it’s that overall kind of entry that makes Doctor Who accessible to a variety of interpretations: campy, sexy, asexual, safe, bi-friendly and even redemptive.

Kudos to Jennifer Pelland for her exuberantly sexy “In Praise of Mature Women,” for the image of “peeling off her Spanx with your teeth” (referring to Donna Noble), and for the delicious and ridiculous line “maybe I can be the hummus in a Donna/River sandwich.”

The people speaking to the reader in this collection may not be the most exuberant voices, the loudest ones at the convention; they’re the ones saying, “The stories in this universe may have just saved my life.” The most poignant essay is Susan Jane Bigelow’s “Same Old Me, Different Face,” in which the author weaves a heartfelt personal story of transition with the metaphor of regeneration.

In short, I recommend this book. I think it’s an important one. These are voices that need to be heard, and you’re invited to listen in.
Posted by Djibril at 14:04