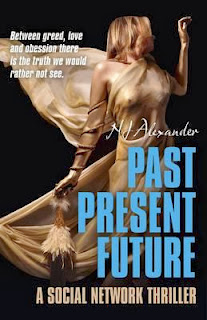 N.J. Alexander’s “social media thriller,” Past Present Future is both fascinating and frustrating. What fascinates: set in the UK, in 2008, against the backdrop of the beginnings of a global recession and the rise of Facebook and Twitter, Alexander’s novel reveals our worst fears about the economy and technology. What frustrates: most of the book’s most thrilling moments occur online, as the protagonist, Nicole, reads the Facebook messages of Anthony Hope, a moderately successful American singer and former co-worker who may—or may not—be stalking her. Alexander has a talent for blending classic surreal imagery with an exploration of the dangers of modern technology, and readers will enjoy how many of Anthony and Nicole’s Facebook posts reference Lewis Carroll’s Alice in Wonderland. Still, despite this psychological tension, I wanted to see more of these characters, particularly Nicole, in real life. In other words, while I love that this book pays so much attention to our virtual lives, the problem with having few in-person moments is that it becomes difficult to understand Nicole and Anthony’s characters. Readers will recognize, for instance, that we present a more glamorous image of our online lives, that our Facebook pages omit or downplay moments that show us as less than clever, witty, or strong. So, every time Anthony posts to his Facebook page, it’s hard to figure out if he’s sending Nicole a veiled message (this is her belief) or if it’s just an innocuous coincidence. And, without real-life action, the reader views Nicole and Anthony as online strangers, not as actual friends we care about, and it becomes hard to understand or sympathize with either of them.

At the crux of Past Present Future is whether Anthony is using Facebook to stalk Nicole or whether Nicole is using Facebook to stalk Anthony. Complicating matters even more is Nicole’s unconventional living situation: she’s living with Richard, a wealthy, older businessman who hasn’t officially divorced his wife. In addition, Nicole has an oddly competitive relationship with her two closest friends, Lorna and Maddy. Richard’s wife, as cosmopolitan as she seems, could be Nicole’s stalker--as could Lorna or Maddy. Richard, who is enthralled by Nicole’s youth and beauty, also becomes a suspect, when a series of text messages appear on Richard’s phone that hint that Nicole is cheating on him with Anthony. Nicole herself is also a suspect, though she seems like the least likely person to be a stalker. She’s an independent woman who enjoys the low-key commitment she has with Richard; she also previously owned a business, Ilex Drapes, that was a victim of the economy. Finally, she’s mother to two children—Elyse and William—and even though Alexander doesn’t give us a lot of information about Nicole’s pre-Facebook, pre-2008 life, we sense that she was a loving and committed mother before she develops an obsession with Anthony.

I don’t want to give too much away because central to the book’s suspense are the questions it raises about Nicole’s own sanity. The book is told in the first person, and as readers, we’re never really sure about what we should believe or shouldn’t. Is Nicole being gas-lighted (objects in her house start to disappear and move around, and it’s not clear how) and made to believe she is crazy? Or is Nicole so delusional that she cannot recognize her own thinking as illogical and disturbed?

The one thing that is certain, however, is that Nicole is addicted to Facebook, and technology makes it easier to review Anthony’s status updates and discover where he is, what he is doing. In essence, Nicole’s having an emotional affair with Anthony—but whether this affair is encouraged or exists entirely in Nicole’s mind is something the reader doesn’t discover until nearly the book’s end.

Set in contemporary times, Past Present Future is decidedly realistic in tone, and it’s also fairly straightforward: Alexander flirts with different reasons for Anthony’s mysterious Facebook posts, but none of these alternatives are taken very seriously for long. As I read, I found it hard to believe that a book with the word “thriller” in its title would be so straightforward, until I realized that this novel is not a mystery or a horror novel. The book maintains some degree of suspense because, as I said before, it isn’t until the book’s ending that we’re 100% certain of Nicole’s mental state. Alexander wants us to question Nicole’s sanity, and by extension, our own, in a technology-driven world. And so, Past Present Future explores how the virtual world has normalized some of Nicole’s odd behavior. Though in her mid-thirties, Nicole reacts like a teenager to Anthony’s posts, and because we’ve all heard the stories of relationships breaking up because of online interactions, Nicole’s reactions (at least initially) almost feel natural. The online stalking, too, seems almost harmless until Nicole decides to visit Anthony’s real-life music studio. (And, again, this is why we need more real-life interactions; it’s only when we see Nicole’s erratic behavior in real life that we realize how much Facebook has changed her life.)

Past Present Future is a book that I would moderately recommend, not to a fan of speculative fiction, but to someone who loves films like The Social Network; this novel references the supernatural (Nicole develops an obsession with numerology and magic), but the book’s thrills arise from Alexander’s limited exploration of her characters’ psychology.
Posted by Djibril at 16:41