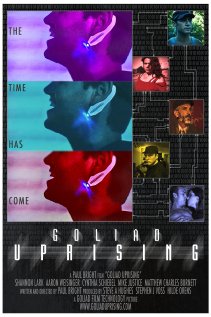 The time has come. An underground group try to stop the Goliad Corporation from taking control of the government with their latest technology device that subversively brainwashes Americans. A politically charged sci fi drama about mass media’s powerful influence on our minds and how easily we are manipulated to support those in power.

These are not my words, but the description of the film Goliad Uprising on the film’s Facebook page. It sounds good, eh? You picture an action-filled science fiction film with dark political undercurrents, an intelligent story with surprising twists, a film you wouldn’t hesitate to choose if you are fond of science fiction, especially intelligent science fiction.

Well, I hate to say this, but you are going to be rather disappointed. I don’t like to give a film a bad review and rip it apart, and especially not an indie film, because I know how hard work it is to make a film on a low budget and how much enthusiasm it is on the film set, but this film does not deliver what it promises.

We follow the young man David, a loner who cleans at Goliad Corporation and shares his lunch with a mouse. He meets Ariel, a mysterious beauty who seduces him into her world of computer espionage and lies. She leads a small group of freedom fighters that wants to restore truth and has a plan to do so by using the same technology that controls people to put the country back on the right path. But are the protesters to be trusted? David is thrown into a dark world where it’s not easy to determine the good from the bad. The film is sort of a David and Goliath story.

The story is basically good and it has a lot of potential. The two main characters, Ariel and David, are well played by Shannon Lark and Aaron Weisinger. The chemistry between them is what holds this film up. But unfortunately it all turns out theatrical and unnatural. Lark (Fangoria Scream Queen and Director of Viscera Film Festival) makes her science fiction feature debut. She does a good job in playing a femme fatale with a fragile side, but I think it’s too exaggerated to make a lasting impression. It falls short.

The film production had a low budget and I am impressed with what the director Paul Bright has accomplished. It is very daring to try and produce a convincing science fiction film when you don’t have money for the special effects or locations. However, it is not enough to make people wear 1940-1950-ish costumes to make it look futuristic. You need to create the whole scene. Otherwise it looks like a bad copy of Bladerunner. The film has some promising tendencies, like using the television news, social media and a pub fight as elements in the story, but it is not convincing. Also, to play music as background noise and not integrated in the story and a confusing use of night and daylight did not make it better.

I must admit I thought for long that I was watching a parody of science fiction because of the theatrical acting, the stereotypical construction of gender and choice of costumes. And it makes me sad, because the story is actually good. It shouldn’t make me want to hit the fast forward button to get through scenes. It asks some good questions about power and manipulation, about David’s rebellion against Goliath. So I became very disappointed when I realized that one of the main keys in the plot is the relationship between the bad guy (played by Bright) and his wife. It seemed too easy a solution given the potential of the story. No! If you are making an intelligent science fiction film, then make it intelligent.

The bottom line here is that it is a good plot, but the lack of good storytelling ruins it. I’m giving this film one point because it was entertaining, however much it disappointed.

Buy this film direct from the producers
Posted by Djibril at 17:50