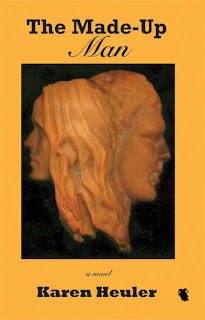 Karen Heuler’s novel begins with a cautionary statement for the post-feminist:


“There are three things a woman should take for granted: looks will fade, men will stray, and wishes are worthless without actions.”

Alyson, a thirty five year old editorial assistant, is on the cusp of learning the bitter truth of this dictum. As the novel opens she lives in a comfortable relationship (or at least in a state of blissful ignorance) with her boyfriend Peter, until she discovers he's having an affair with her best friend, Maggie. The torrent of emotions she experiences, from self-pity to hatred and a desire for revenge, lead her to enter into a Faustian bargain with a gypsy, Madame Hope, who agrees to change her into a man in exchange for her soul.

This is more than just well-written fantasy; it's an articulate psychological study of a woman's perception of her gender role. The strength of the book rests on its assured rendering of the journey from a female to a male viewpoint. Alyson, like Marlowe's Dr Faustus, is an intensely self-reflective character who retains a sharp consciousness of what she has lost as well as what she stands to gain from her gender swap. Heuler manages the shifting viewpoints of the central character well, whilst providing a convincing world of work and leisure within which Alyson plays out the drama of her new-found masculinity. Bob, Alyson's masculine alter-ego, plunges headlong into a struggle for success, wealth and sexual conquest.

Interestingly, unlike Goethe or Marlowe's literary creations, Alyson/Bob seems to exercise greater autonomy at the same time as her/his aspirations have shrunk to the socio-economic mindset of middle class USA. This is a Faust for the 21st century: goal-orientated, workaholic and status aware.

The fantasy element is confidently executed with some wonderful dreamlike transformation sequences but Heuler’s allegory works mainly because it’s rooted in the everyday. There’s even a Mephistophelean figure in the shape of the gypsy’s dog.

It’s the authentic language of the editorial world and the down-at-heel barfly that gives the novel both its sense of place and its engaging humour. The narrative is alive with comedy. At one point the newly transmogrified Bob is disconcerted to find that despite his otherwise perfectly masculine exterior, he’s still wearing Alyson’s nail polish. After a fruitless search for nail polish remover he’s forced to ask himself: “Why should there be no polish remover? Even more important, however, was why there was polish on his nails. Could the devil manage everything and not manage that?” In fact, Heuler’s devil is often incompetent, making a series of small practical blunders and proving hopeless at DIY.

Bob eventually finds his feet and sets out to achieve alpha male status in the office, with a strategy that leads to him proposing successively to two women. Unusually, this man seems to have an unnatural desire to tie himself down to domesticity and a peculiar urge to pick up and fondle baby clothes on a visit to a maternity store. Perhaps it’s just another of the devil’s blunders—or is Heuler suggesting that neither sex really knows what they want? Whatever the author’s intentions, it makes entertaining reading—Heuler’s instinct for the dramatic pause is always spot on.

Alyson/Bob pursues a range of ambitious editorial promotional projects that have their own complex life. Just occasionally I'd have wished for a little less office banality and a little more magic but Heuler brings off a startling conclusion in a publicity stunt in which contestants compete to score Bigfoot sightings.

Heuler goes under the skin of gender stereotypes and gives a real sense of a character having run the gamut of the emotional and physical spectrum from male to female. Heuler makes us laugh at the egocentric posturing of men and the self-deluding fantasies of women who just want “to love and be loved forever”.