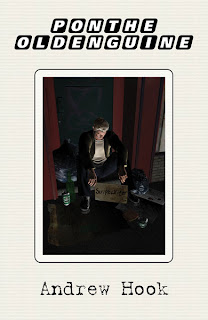 What is the truth? Is there any such thing? Is the truth what we make it ourselves, is it a constant or does it shape itself to fit whatever reality we want to believe in? This is one of the questions posed by the outlandish, funny and original novella, Ponthe Oldenguine. Even the book’s title is an anagram, possibly. Everything in these pages is a puzzle, a game, and a highly entertaining one at that.

Set in Norwich, Ponthe Oldenguine is a first person narrative written by a disillusioned journalist who goes by the unlikely name of Andrew Hook—which, of course, is probably a pseudonym. Hook is bored, trapped in a hack role in a local newspaper. Then he hits on the idea of repeating George Orwell’s experiment of living among the homeless, a sort of Down and Out in Norfolk. He will sleep rough, well, at night certainly, his need of modern convenience and luxury preclude a total immersion in that cold, squalid and unpleasant world.

A chance meeting with a real homeless man with whom he shares a doorway, and who appears to know more about the book’s hero (is that the right word?) than is healthy, leads Hook into a labyrinthine journey through a number of versions of Oldenguine’s life. All of them involve the man’s efforts to revolutionise BBC television programming with a series of increasingly ludicrous scripts.

Many of these scripts were produced, allegedly, but quickly dropped. Or were they? Produced or dropped that is. Internet searches reveal nothing, but then, can the Internet be trusted? Surely Oldenguine’s claims of persecution and conspiracy can explain that away. Or can they?

All the time, the narrator finds his own world dissolving into a chaotic splintering of the borders between truth and lie, while the borders between his own and Oldenguine’s life seems to be blurring. Even Hook’s girlfriend seems to know more than she is letting on and living another life that the narrator knows nothing about. Or perhaps she is simply living her life.

To add insult to Hook’s injury, including the contempt for him displayed by the staff of the Greggs bakery opposite the doorway he shares with Oldenguine, the book is littered with asides from Hook’s editor, snide comments, aspersions and downright insult.

So, we have a heady mix, the ubiquitous small press hero, at war with the world, awful to his long-suffering girlfriend, gauche and single-minded, plunged into a mishmash of truth and lie and half-truth and semi-lie and wild ideas and wilder conspiracies while, all the time, starkly, bleakly, the truth is staring us in the face.

Truth is what we all make it, whether an embellished yarn told to our mates in the pub or what those in power decide we need to hear. And, especially these days, it is the oddly ordered universe created by the media. Interesting then that Oldenguine’s own mad journey was within the world of television, which in itself is purveyor of fantasy, because surely nothing, even so-called reality, is the bare truth. Surely everything it touches is dramatised, scripted, air-brushed and packaged to make it work.

Ponthe Oldenguine reminded me of a raft of so-called true memoires published at the end of the last century, all written by people (mostly men of course) claiming to have been operatives in some elite wing of the armed forces or secret service. On being challenged for proof that they were even in a particular organisation, because no evidence existed, no mention made of them in any records, their reply would invariably be that “it was so secret that all records were destroyed”.

In the end we can prove or disprove nothing because there will always be a Ponthe Oldenguine who will argue that left is right and up is down and that all evidence has been expunged and all we can do its trust him...

So, don't believe a word, but please believe me when I tell you, that Ponthe Oldenguine does exist and is one entertaining, ambiguous and funny book.

"Upon the old engine"? Wonder how that fits into the story...

(Or is the anagram actually "Hung onto penile Ed"? Millions of fans want to know!)