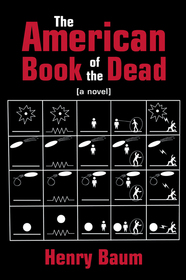 A simple cover, featuring a series of stylized cartoonish scenes, white on black, belies a complex tale of humanity’s ability to be both rational and stark raving mad. Baum, who is at work on a follow up story set in the same universe, makes this novel available for free download, as well as on sale as a traditional hardcopy; it is more than worth the cost. The American Book of the Dead is an apocalyptic tale of an apocalypse that hasn’t happened, does happen, doesn’t happen or might happen.

Eugene Myers is a failed author who simply wants to leave a mark on the world. His career is going nowhere and his family is falling apart. His marriage is rocky at best, and he has discovered his daughter is doing Internet porn for extra cash. Things look bleak for his life when the dreams start. Dreams of faces, places, names and addresses. Dreams of real people, people he has never met. He begins chronicling the phenomena and the state of the world, only to watch as everything he writes begins to unfold. Is he making the future, or just seeing it?

Enter President Winchell, his father, and his cabinet, who believe completely that it is their job to bring about the End Times. Winchell the elder has secret information, things that only top level government officials know and he divulges this information to Winchell the younger upon his son’s ascendency to the seat of President of the United States. Aliens exist and they wish to help us become a better society. There is no hell. Everyone who dies goes to a peaceful place, free of sadness, pain, and doubt. Everyone who dies goes there. It is knowledge that would make war obsolete, killing an enemy would be pointless.

Armed with this knowledge, Winchell the elder seeks to, as Eric Voegelin put it in The New Science of Politics in 1952, immanentize the eschaton, which is to bring about a final stage of heaven on earth. It is felt, however, that getting people to come together, unified as a species, is more than difficult. Too many cultural and religious boundaries exist. Winchell the elder seeks to break these concepts with a massive and devastating war. Billions will die, but he knows, he doesn’t just believe, he knows what will become of them afterward. For those that remain, life will be harder, but this hardship will force a social evolution as nothing else possibly could.

Winchell the younger, however, seems to wholly miss the point of there being no “correct” religion and sets about the task as more of a religious crusade. At first he sees himself in the role of a necessary Anti-Christ and then, later, decides that he may be the actual Messiah. His father supports this delusion at first for he feels it is necessary to get the American people to back what seems to be an insane war, but comes to realize his son has his own personal agenda.

Written in a self-aware, sometimes humorous style, Baum portrays protagonist Myers as a genuine human being, filled with the sort of traits we all share, even the ones we don’t always want others to see and never give voice to. His constant discomfort at his role as either author or prophet of the apocalypse feels genuine; his desire to not have the constant responsibility is understandable. The reader finds Myers easy to identify with and therefore his actions, whatever they may be, seem reasonable.

On the flip side of this is the almost cartoonish demagoguery and naiveté of President Winchell. It is unclear whether Baum intends him to be a parody of former President George W. Bush, but it certainly feels that way. It is difficult to tell whether the man is insane, stupid, or both. He is easy to hate but also easy to pity. He truly believes in what he is doing, but is unwilling to accept all of the information his father provides him. Like any good zealot he cherry picks what parts of the truth to believe in and twists each revelation with his own personal interpretation based on his preexisting beliefs. He is the closest thing the piece has to a true villain, and though he may be completely mad, unlike predecessors such as Hitler, Stalin, Pol Pot, or Mr. Burns he may actually be the closest any one madman has been to correct. His father, who approaches the whole situation with a more logical, less narrow minded view, pulls all the strings perfectly right up until it is time to bring the survivors together, at which point the puppet decides to assert its own will. When President Winchell meets his eventual fate, it is easy to, if not sympathize with, then at least pity him.

At the core, the novel is a story about mankind and the need for change. Myers wishes to change his life, his world, and begins the novel in effort to vent this desire for change. Though things seem bleak, the novel manages to hold on to a certain hope in the intrinsic goodness of people, but also seems to feel that without a some catastrophic event forcing total social reevaluation, the human race is ultimately going to continue to degrade. While the Winchells’ plan for war may be unfathomably destructive, even Myers is unsure whether or not it is needed. As casualties mount, first thousands, then millions, and ultimately billions, the cost in lives forces the remaining few to reassess social priorities in a way that it seems little else could.

I don’t mean to say that I agree that an apocalyptic war is the only way to bring about change but… well maybe I do. Policies, however well meaning, will be resisted. Politics are a constant battle between left and right and I don’t think it matters what side of that line you may fall on, we can all probably agree that government may have lost any real interest in governing and is instead more interested in playing a game of thrones. Religion has ever been a huge dividing line, the words of one prophet or another fought over as it has been for centuries and likely will be for centuries to come. Cultures will always try to preserve themselves, which isn’t a bad thing by any means, but it does leave one to wonder if it isn’t just another way we separate ourselves from one another. “Separate but equal” sounds good in theory, but even while many are perfectly fine with it (I count myself among that number), there are just as many who regard that separation with suspicion. While you may define this as largely just the ignorance of the uneducated (as I do) it is difficult to come up with any real piece of social engineering that could break through that ignorance.

This is where the war comes in. Keep in mind that the ideas here come with the caveat that it is known utterly and without question that the survivors will reach a new stage of enlightenment due to their shared experiences and those that fall will absolutely go to “heaven”. Operating with that as a known set of parameters, can I at least see the argument that the war is a valid means of social change? Sure. Even the protagonist Myers wishes there were another way, but seems to accept that there may not be. If the power were put into his hands to try a different route, would he take it? Absolutely. That does not mean, however, that it is impossible to accept the apocalypse war as a means to an end.

The ground covered in the novel is not particularly new. Plenty of apocalyptic novels have covered it before. 1949’s Earth Abides, in which humanity is all but wiped out by an unknown virus and must be rebuilt, focusing specifically on one man as an architect of a new society explored it. 1977’s Lucifier’s Hammer in which a massive comet slams into the Earth, reshaping the landscape, burning away or drowning much of the life on the planet, causes the priorities in the lives of the survivors to be completely rethought. Even in Cormac McCarthy’s unbelievably bleak novel The Road, The Boy has been raised in a burnt and ashen wasteland, filled with every manner of human horror imagineable, but has been instilled with and clings to a very palpable sense of right and wrong. We wonder sometimes if The Man is doing the right thing by sheltering The Boy in this way, if he is not in fact teaching The Boy to be weak in an age meant only for the strong, but The Boy seems strong with conviction, even bending his father under the weight of it. The Boy represents an ideal that persists even in the face of overwhelming misery and violence.

Even in stories where a full-on apocalypse is not on the setlist, there plays a similar song. Theodore Sturgeon’s short story “Unite and Conquer”, published in Astounding Science Fiction in 1948 has mankind uniting against an engineered alien threat. This would later become the basic plot of the Outer Limits original series episode “The Architects of Fear” starring the late Robert Culp which in turn would inspire comic book creator Alan Moore to write the now classic Watchmen graphic novel (in the film version you can actually see the Outer Limits episode playing on one of Ozymandius’ monitors).

It would seem that many writers agree that a paradigm shift of this magnitude would require an equally massive catalyst. The subject matter has been covered again and again. Baum does manage to put a rather pleasant new twist in the tale but in the end it’s the same lesson we’ve been trying to teach for who knows how long. Race, religion, culture, or country we are all humans and have, at our core, the same strengths and weaknesses. The lesson always seems to be that we should try to leave behind this focus on our differences, and instead concern ourselves with the similarities. It’s a lesson taught in many different ways, but it’s always the same lesson. It’s a pity it’s one we seem to have so much trouble actually learning.

Like two great men once said: Be excellent to each other, and party on, dudes.