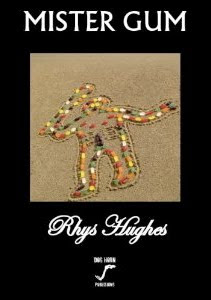 Mister Gum is silly. The more you read, the sillier it gets. Eventually it becomes so absurd that it threatens to become psychologically disturbing.

The book defies the usual critical methodology: do the characters and plot stand up to scrutiny? What are the themes and conceits of the work? How good is the writing? A serious approach doesn't work. It has no conceptual depths; it's basically an exploration of man's all-consuming obsession: his ejaculate. The characters are vehicles for humorous situations. The themes: tits, bums, cocks and come. The writing: awful puns, desperate metaphors, excruciating alliteration and puerile wordplay. One of the great achievements of the book is the sheer number and variety of synonyms Hughes manages to find for “sperm” or any other word associated with the act of regeneration. It made me laugh—often, and groan and retch (there's a particularly horrific scene involving a sombrero and a bank manager's anus).


Mister Gum is a man's book. As a man, I should by definition find it funny, shouldn't I? If this review was being written instead by Nicola Jackson, she might be tempted to protest at the lack of any strong female characters. The role of one of the book's few female characters, the prim Primula, is to be sold into prostitution with an evil dwarf in possession of her hymen and she's allowed not one word of complaint. There's another non-speaking part for Claribell, Peter the Tenant's girlfriend (Peter Tenant has a familiar ring about it, no?) whose role is to be screwed twice a day and then go off in a huff when he fails to perform.

Apart from “the smell of a freshly-screwed secretary” in a bank manager's office there's barely a woman to be found. There are so few women that the male characters have to pull each other off for amusement, which they do with alarming frequency. The author, unusually, thereby misses a trick since without a female perspective there's no foil to the male characters' relentlessly expanding egos. OK, Lynne Truss makes one or two cameo appearances to plead the case for literary pedants but as she is, at least in one of these incarnations merely an enraged automaton operated by that evil dwarf, her femininity hardly counts.

Hughes' talent as a narrator comes to the fore in these shifts in action: the plot twists that take the reader on a bewildering journey through his surreal world in a tightly-packed series of inter-linked episodes. The world that Hughes has created is wonderfully brought to life and the punning names seem to drip effortlessly from his pen. The penultimate section of the book, in which an animated spermatozoon wins the Nobel Laureate, was, for me, the funniest part of the book.

Part of the book's charm is its lack of pretension. It doesn't take itself seriously. And yet, in a rather earnest afterword, Hughes exposes his rationale for the book - that it is a reaction against the kind of gloomy literariness, embodied by such “quasi-intellectuals” as Mark Lawson. Mister Gum seems to crave a deeper level of understanding, to persuade us that puerility is an act of protest, rather than being content just to be a funny book amusing us with its shallow and chauvinist fantasy world. I would love to hear this book discussed by Mark Lawson and Germaine Greer on Radio 3's 'Night Waves'.

Whilst I don't think it is quite as subversive as it would like to be, I think 'Mister Gum' is a rollicking read, very funny in parts and extremely rude. It's just not a book to be taken seriously, despite the tone of the afterword, and would, as the author himself suggests, be best consumed with a strong beer or magic mushrooms, thereby deadening the effect of one too many cock jokes. Mister Gum does have a curious way of making you want to go off and have a good hot shower.

Meanwhile, my alter ego, Nicola Jackson, has posted a copy of her review of Mister Gum to the Society for the Protection of Female Characters in Literature who will be sending a crack team of assassins round to deal with Mr. Hughes, or Mr. Gum, or whoever he's masquerading as these days.