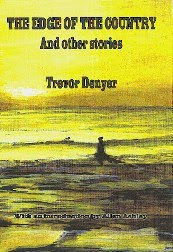 The small press world owes a great deal to Trevor Denyer. Though starting off as a writer of some note back in the 1990s, he is better known these days as a magazine publisher, first with Roadworks in the latter years of the last century, then Legend and finally the much acclaimed Midnight Street. All are of the highest quality and placing a story in the pages of a Trevor Denyer magazine brings its fair share of kudos to any small press writer. Because of this, it has been easy to forget that initial chapter of Denyer’s career. As a result, his first, and long overdue, collection, The Edge of the Country, is a very welcome reminder of his talent as an author in his own right. The title of Allen Ashley’s introduction says it all: 'About Time Too'.

It is a slim volume, a baker’s dozen of tales, but size isn’t everything, as any reader knows when they reach page 1,135 of some titanic, bloated blockbuster, only to realise that there are another 2,000 pages to go!

The book itself is an attractive artefact with some very atmospheric cover art, presumably by the author himself (there is no other credit for this cover and it is copyrighted to Trevor Denyer). It sets the tone, the feel and is intriguing enough to entice you inside to see what’s waiting.

I’ve met Trevor Denyer on more than one occasion and find him, like most horror and dark fiction writers I know, to be an affable, pleasant, easy-going gent, so that makes these stories, their content and feel, even more of a shock than they would be anyway. Most drill into the human psyche to uncover lonely creatures, yearning for their pasts and happier times. Several stories tell of the return of, or search for, lost—literally lost—love, others show the terrible realities of physical dissolution, of the inevitable destruction of our bodies and spirits.

There is no sentimentally here, even those stories that tell of those souls reaching out for the things they have loved and lost, are presented in a mixture of soft focus and stark shadow. There is a depth here that often belies the simplicity of the plots and Denyer’s sharp-honed and economical prose.

Take the title story, for example, ‘The Edge of the Country’. Here a lonely man sets out on an Odyssey to find and meet a long-lost lover. The descriptive writing is evocative of sad train journeys and loneliness-in-a-crowd. The emotion subtly pervades the narrative and builds towards a climax that is shocking without being melodramatic. Then there is ‘Falling Asleep’, a memoir of a former lover who could be, by turns, tender and then cruel, and is now gone, or is she? ‘A Rose from Elvis’ is also filled with regret and memory as it reveals a woman’s affection, perhaps love, for a middle-aged biker who has named himself after the King, again tender without straying anywhere the saccharine, realistic, and intensely atmospheric. Even the most surreal and imaginative piece, ‘Landfall’, although set in a very far future, is rooted in the rich soil of love lost and regained. ‘Too Close’ moves the loss and guilt themes away from romantic relationships to mother and son, but again, is redolent with emotion and atmosphere, building quickly to a very disturbing last line.

Not that everything Denyer has offered us is in his collection is wistful and soulful. There is horror aplenty, and some very black humour, ‘Fuse’ being a case in point. This is a mischievous and messy slab of darkness that turns a pleasant sun-drenched beach into the location for a nightmare. The pace is fast, the monsters suitably nasty and imaginative, but for me, it was the one tale that lacked something, emotional involvement I think. ‘Killing Devils’ on the other hand, draws us right in and combines brutal reality of illness with a war against demons, whether real or imagined it is hard to tell but in the end doesn’t matter. In this story, Denyer vividly opens the door on the savagery of disease and what it feels to be its victim, both physically and mentally. A similar theme is explored in ‘Event Horizon’ in which, once more, our own body becomes the enemy.

As mentioned earlier, among the publications Denyer is responsible for was the short-lived but excellent Legend, which was declaration of his love of fantasy as well as the harder, darker stuff. ‘Glastonbury’, ‘Old Slowbones’ and the very excellent ‘Wycere’ make up the fantasy element of this collection. The latter is my own favourite of the three, although each has it own merits, the first is atmospheric and inventive, the second, though, for me, the weaker, is still a fast-paced, entertaining mini-saga with all the right elements of a good sword-swinger. ‘Wycere’ is a tale of a house which is also a doorway to another world, a beautiful place where those who visit are allowed to love. But which of the protagonists is from this world and which from the other, in the end, unanswerable. There are subtleties and ambiguities aplenty here, what I call a satisfying enigma.

Finally, we have, well, finality itself, another trio of stories, this time dealing with the biggest question of all. Some are dark and unnerving such as ‘The Silent Hours’ in which a young boy is forced to confront The End, but discovers that its sting is, while painful, can also be a means of reuniting the long-parted. ‘A Place for Dying’ is a masterly description of an old people’s home that focuses on a handful of elderly ladies who are literally waiting for death. Their hopelessness and fear is described with alarming vividness and the event itself is shown as a much bleaker experience than many of us would like to believe it to be.

The last of the death trio is ‘The Special Place’ and this one is also Tel’s Favourite. Evocative and beautifully described this is a glimpse into an intense and happy relationship, during a moment that even the reader wishes would last forever, but in a brief, shocking and dreamlike revelation, the ultimate truth is revealed.

Your journey into The Edge of the Country will pass quickly once you open its covers and set off. It will take you through regions of intense emotion and short but very dark tunnels then on into bleaker, unsettling landscapes. This book is a surprise, a stark glimpse into the writing skills and motivations of someone who must give us more and who obviously understands what writing is all about, both as a skilled and acclaimed editor and, as we see here, an author himself.

Buy this item from Midnight Street
Posted by Djibril at 11:40