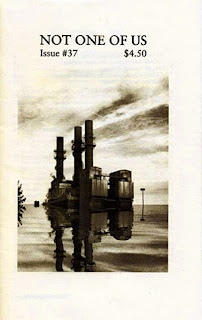 Not One of Us has been published for over twenty years now, with issue one appearing in October 1986, and in the intervening time it has consistently published high-quality, atmospheric horror on the theme of the alien, the misfit, and the unfortunate. This issue, which editor John Benson describes as the "comrades issue" is a typically entertaining and thought-provoking read, with five short stories and seven poems.

The opening story, ‘No Good Deed,’ by regular contributor Patricia Russo, is classic NOoU fare: life on the streets; life is tough; friends stick together, especially when life is tough. Although in the case of Janey, Marc, and Fernando, life is more a story of apathy, of not having escaped from post-high school doldrums twenty years later, of never having found a job you didn't hate, a flat that was any good, enough money to get out of there, or the energy to do anything about it. Or any relationship as good as your two best friends from high school. Told with atmosphere, verve, perhaps a hint of judgemental tone, but no cheap pathos, the story follows our three protagonists dumpster-diving in the alleys behind restaurants on a Friday night, when the mild tale of alienated friends shifts gear with the introduction of something truly alien. From the shocking climax follows a last line that is simultaneously hopeful and chillingly sociopathic.

A poem, ‘Cydonia River’ by Danny Adams, fills the next three pages of this issue. Told in six stanzas, each a chapter told from the point of view of a different member of the struggling Mars colony. The poem combines prosaic, real-life vignettes with a growing sense of heartbreak and desperation. There is no conclusion, but that is the case with most tragedies; we just have to live with what has happened.

Amanda Downum’s ‘Ebb’ is a dark, curious story of Celia, a young psychic with a special affinity for the sea and the tides, and a sinister family history that she is trying to escape from, and especially trying to keep her unborn daughter from. A tall, shaven-headed biker looms into her life, but is he working for her family or trying to save her from it? Although we never learn exactly what the danger is, we never doubt that it is there, and the lack of immediate menace makes the possibility that Celia will succumb to her mother's devices. A very effective story that keeps the reader guessing and, after it is done, dreaming.

‘A Chrome Attic’ by Elizabeth Barrette is a short, quirky poem full of the imagery of a mechanised chameleon, a being that is different but imitative. I am not sure if I think this piece is about a computer, an alien, or just a person lost in someone else’s eyes, but it’s a poem, so I guess it doesn’t matter what it’s about.

Brian Worley’s ‘Smother’ is a gruesome little story, told in a second-person, about a non-descript man, unhappy with his life—perhaps in mid-life crisis—who begins a brutal work-out regime and boxing training. The story is more Hellraiser than Fight Club as the second-person protagonist soon sheds his skin, with grim physical and psychological consequences. As a study in violence, desperation, and self-hatred this story is more disturbing than most.

The longest story in this issue, Chris Bell's ‘The Locum, Yellow Rose,’ is also perhaps the strangest, although there is no lack of empathy and recognisable motivation in the characters. Perhaps the most interesting character, however, is not the somewhat directionless narrator, nor his angry, dissatisfied ex-girlfriend, but the mechanical Betty Boop-like doll (the Locum Yellow Rose of the title), which pulled the trigger on the failing relationship, and who speaks your innermost thought via a roll of ticker-tape. Needless to say there are secrets yet to be revealed, emotions to be learned, and tragedies yet to be lived before this story is told. Despite the genre, a deeply human story.

Three poems fill the next two pages before the final story in this issue. Jennifer Crow's ‘Grave statue of an unknown baboon-headed god, c. 300 B.C.’ is a mild, thoughtful piece narrated by a minor deity, that could well have been inspired by an archaeological find. ‘Sticks’ by Karen R. Porter is an evocative little piece about an old man (or a rodent?) and his relationship with the row of upright sticks surrounding his home. ‘Your First Time’ is Samantha Henderon’s creepy take on the myth of a monster coming to London—a vampire, or Jack the Ripper, or something worse than either?

The final story, then, is Joshua Reynolds’s ‘Just an Old-fashioned Love Song,’ a grim tale of crime and love and parasitic aliens in the Deep South, narrated in mid-twentieth century slang like a twisted Bonnie and Clyde meet Hellboy. The good guys are more sadistic than the bad guys, the heroes are the most villainous of all, and love conquers eternal. "Or at least for another day."

Another regular NOoA contributor—impressive poet Sonya Taaffe—provides the end-piece for this issue, a two-page collection of verses, ‘Kameraden Obscure: A Retrospective,’ that spans across years, art forms, and terrors.

Subscribe to Not One of Us today; it’s always worth the trouble.
Posted by Djibril at 15:02