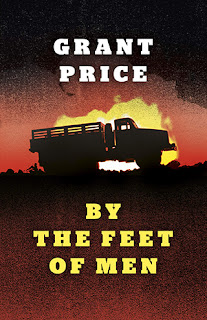 Let’s get this out of the way first: Price doesn’t break any brand new ground in the post-apocalyptic scenario. I don’t necessarily mean this is a bad thing, but it’s very much a basic type of book we’ve come to expect: there was something bad that happened (check), there’s a weird, vague-ish name for it (also check), at some point our heroes will face off against an evil group that wanders around (check), and of course an evil coalition (literally called “The Koalition”) who want to stop our heroes for reasons that are never made very clear.

Where Price excels, though, is in relationships and writing style. I’m not someone who has an easy time following a lot of action, and this book is filled with it. There’s always an attack on the Warspite, the truck driven by the Runners. It’s clear that Price has these scenes laid out in his head almost cinematically, and conveys them with as much clarity. It’s amazing how intricate they are, getting in small details that quite frankly, make me care and understand just how terrible this new world is. It’s clear he’s figured out this entire world, and he knows all of the little stops. The setting is primarily Europe, a location I’m not really familiar with, but he’s managed to create a world I feel like I’ve been to. Too often, with post-apocalyptic fiction we don’t get a clear setting other than “it sucks now,” but this is a real world, filled with dangers and broken cities. There’s some real world building here that’s extremely impressive, and a style that gives you details while not bogging you down.

There’s also a real feel for these characters. Cassady and Ghazi are likable, which is important because you’re spending a lot of time with them. There is a lived-in quality to their friendship, one that you can tell starts well before this book. There’s nothing forced in our getting to know them; it’s just two Runners who have spent a long time on the road, and despite the importance of this particular job, they clearly view it as another day at the office. The office here being a hellscape through which they have to manage, but hey, it’s another day at the office, right? Other Runners join them, but I never felt they were as fleshed out as our two main characters. That’s not a detriment to the novel.

Overall, this was an enjoyable novel. I had a hard time putting it down, because I was engrossed with the way it played with my expectations, and I kept wondering what was going happen next. There are some good moments of foreshadowing early on that pay off later, which is also a nice bonus, especially for those paying close attention. Without giving too much away, I also liked the ending, which had a unique quality to it. Not what I was expecting especially after so much of this novel seemed familiar. It’s like a good action movie, one that keeps you on your toes, and with prose the keeps you engrossed the whole time, I highly recommend By The Feet of Men.
Djibril at 09:08
Share