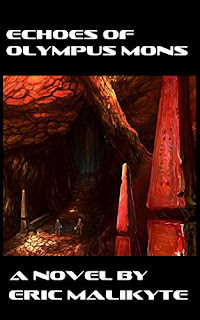 In some ways, this is an ingenious reworking of stories that present hauntings and “supernatural” visitations as reflections or recordings, of which the classic example is probably Nigel Kneale’s TV play The Stone Tapes. Hal wonders whether “this was the proof that every ghost story in the world was nothing more than an elaborate interaction between non-local consciousness and concentrations of dark matter? … What if [the Martians’] final moments were so traumatic that they were forever recorded in the dark matter that permeated Mars?” But the eerie oscillation between the uncanny and the scientific which Kneale managed is absent from Echoes of Olympus Mons, partly because its Martian setting flags too vividly that this is a science fiction novel. While it might sound unfair to compare Echoes to The Stone Tapes (after all, Kneale was probably the greatest television dramatist to work in SF, and much of the effect of his work depends on the way he understood, even pioneered, the ambiguity of television drama), the point is a more fundamental one. Can we have such a thing as a supernatural/science fiction fusion? Some horror/sf crossovers work. There is, of course, Lovecraft and some of Arthur Machen, and certain stories written in what used to be called the “New Weird”, such as China Mieville’s “The Tain”. But while there are graphic-horror elements to Echoes the supernatural implications soon dissipate. There are strong religious elements in the background: at times the mantis-like creatures which seem to be part of the dark-matter continuum are fused with visions that stem from Hal’s reaction to his fundamentalist-Catholic upbringing, but here, too, the mixture doesn’t quite cohere.

Part of the problem is that Hal (a name adopted as part of the rejection of his Hispanic Catholic upbringing) is such an unpleasant character. He certainly has reasons to be. His father, we come to see, is one step away from outright religious mania and Hal has grown up watching the abuse of his mother. He is ferociously bright, and his brilliance is rejected by bureaucratic, unimaginative teachers. However, his rebelliousness appears as immaturity and fake hardboiled cynicism. He is much more interested in scoring points off his teachers and the wealth and celebrity elements of scientific achievement than actually making a scientific breakthrough. By the end of the book, one begins to sympathise with his father. Hal’s a difficult character to write, and it shows in how he comes across to the readers. It’s not clear how far we are actually meant to sympathise with Hal, but in fact we don’t, partly because of the way he is shown. Even the rare moments where he realises that other people are in fact real people with feelings seem as synthetic and one-dimensional as his rebelliousness.

If that is a false interpretation, it has to be down to the aspects of the writing which serve to make us read Hal like this. However much we might want to sympathise with a rebel, when we meet Hal going on an unauthorised walkabout on the surface of Mars knowing full well that a fellow student has got cabin fever, done the same and never come back, and telling his furious teacher that “I just needed to get out for a little while”, we know that we is either an idiot or that there is something seriously wrong with him. He tells us shortly afterwards that he has ADHD—but that is mentioned almost as an aside and sounds very much like an excuse. It would have been interesting to have this side of him more fully explored, to get really inside him, to understand what it might be like to be a genius with ADHD, but this would make Echoes a very different novel to the horror-thriller it clearly wants to be. He can hack security logs and the surface rovers, so he can steal one easily enough: possibly, but this is the kind of plotting which assumes that not only is Hal a genius, the security systems are incredibly weak. There are no doubt plenty of such security failures in real life (most internet hacking is precisely because internet security is shoddy), but there’s little sense of tension given to us. Similarly, action and drama are given to us, but on a one-note level. Twice Hal ‘feels his heart seizing in his chest’ when once triggers cliché-alert. When Hal tells us that “[s]ome ancient, eldritch fear clawed at my heart”, either he or the author has clearly read sufficient Lovecraftian melodrama to respond to it, but not enough to move beyond it towards a genuine evocation of horror or terror.

There’s certainly a strong idea behind the novel: “dark matter” is a concept that leads to any number of interpretations, and the fusion of the supernatural and the scientific is something that many lovers of both forms look towards with anticipation. At the end of the day, Echoes of Olympus Mons is a routine teen-against-the-world novel whose aspirations serve to undermine its execution, and even if it fails to achieve the Holy Grail of SF/supernatural fusion, it’s a banging if unsubtle horror/SF.
Djibril at 10:43
Share