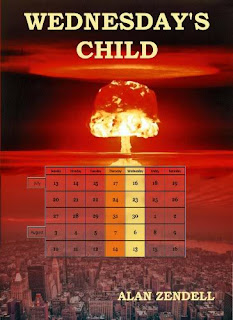 Technothrillers, the ubiquitous “they” say, are just science fiction novels in which the president’s a character; science fiction, the critic Farah Mendlesohn has said, can be seen as an argument with the universe. The president doesn’t appear in Wednesday’s Child, the second novel from Alan Zendell, and what arguments it makes are hectoring at best—but with its present-day setting, its spies and terrorist threats, this competently written wish-fulfillment wants very much to be a technothriller when it grows up.

Twenty-five years ago, H.F. Saint, a 45-year-old New York businessman at the time, made quite a lot of money off the sale of his first novel, Memoirs of an Invisible Man: enough that he retired to the south of France, never to write another. —As only novels go, Memoirs is fine enough. It’s a potboiler, on the fun end of serviceable, with a definite charge from Saint’s eye for excruciating detail. It’s very clear he spent uncounted hours daydreaming his way through midtown and downtown, at offices, hotels, his athletic club, gaming his hypothetical way through this scenario and that: if I were suddenly rendered invisible, and if I were being chased by a ruthless government agency, how would I handle this? Navigate that? How would I get food, since I can’t exactly up and buy it anymore? How would I deal with the whole not being able to wear clothes thing?

There’s a similar charge at the heart of Wednesday’s Child, a what-if all-too-obviously fed by bootless dreaming hours at the author’s day-job keyboard: what if you woke up Wednesday and it was actually Thursday, and you’d skipped ahead in time? What if you went to sleep that Thursday, only when you woke up it was the Wednesday you’d skipped? And what if you can remember everything that’s going to happen—unless you change it? And what if even though you’re a fiftyish investment banker by day, you’re also a top-secret sleeper agent for an elite anti-terrorism task force, and you’ve just been called back to active duty, and somebody’s smuggling radioactive isotopes into the country, and they’re gonna make a dirty bomb, and, and—

It’s instructive that, with all this rattling machinery of plot at his disposal, Zendell can’t manage a fraction of the tension and thrills Saint spread out over nearly twice the length with just a cat-and-mouse game between invisible man and government agent. Part of it’s due to the nature of the affliction: seeing how badly things might turn out one Thursday after another, only to then go back armed with that knowledge to play out the previous Wednesday, like a video gamer with one eye on a walkthrough they’ve downloaded for the tricky boss fights. Difficult to build up a head of narrative steam from the usual thriller tropes in such circumstances.

But mostly, it’s because everyone is so damned reasonable about the whole affair. Unreasonably so. Our protagonist, Dylan Brice, is initially discombobulated by the time-jumps, but rapidly susses out the ground rules, in which he places an inordinate amount of faith. More than once we’re told, quite earnestly, that it’s clear he’ll always skip around Thursdays and Wednesdays, and not any other pair of days: if it weren’t so regular and tidy and predictable, why, it’d just be too damn hard to always be trying to figure out when it is you’re waking up.

It’s tidy in other ways. Brice will need to convince others of his time-jumping, and very paranoid and powerful others given his work in counterterrorism. So he can carry small things with him when he jumps, like flash drives full of news reports from the Thursdays he didn’t do what needed to be done, and DVDs full of cable news programs (all compiled with the help of his loving, supportive wife and his rational, reasonable neurologist), along with the front pages of newspapers that don’t exist anymore, and tape-recorded conversations with alternate versions of the people he now needs to convince, even an alarm clock for the one morning he must wake up by five. The ghost of the daydreaming author, the god-mode gamer, looms thickly over the proceedings: what problems might this cause? How would I solve them? What would I need to put in place? Look, then, and see how clever I’d be! —It’s technothriller as mansplanation.

With the usual avenues of thrills and chills so neatly pre-empted, then, what’s a reader to do but ask more piercing and unsettling questions about the book at hand? Why, then, is this story being told, and in this way?

The first time Brice uses his jumping to thwart a terrorist plot, he finds himself interrogating a group of sailors, among which are a couple he knows to be terrorists—because in the Thursday that he went through, the Thursday he’s trying to stop, he saw them do what he’s trying to undo. So he invents a pretext to pick one of the terrorists out of the crowd and leans on him, to the point of physical intimidation—we’re told of bones crunching in the other man’s foot, but it’s unclear whether that’s hyperbole. Stricken—such a strong word—by remorse afterwards, Brice remembers his father, who’d been awarded a Purple Heart in Korea, who’d insisted he was no hero, that there’s nothing positive about being in combat, that he’d been given a medal for shooting other men dead on the worst day of his life. “My father was wrong,” says Brice, then; and later, at another wavering moment when he contemplates the rather ruthless tactics he’s undertaken: “Doing it while knowing it violated what I believed in would strengthen my resolve to ensure that I wouldn’t have to again.”

For Brice to pronounce his father wrong, or to see a moral quandary in doing hard things to bad people to keep his country safe, is to appallingly miss the point. There are no tough questions to be asked here—Brice’s one weird trick dispels them handily enough. When he does these hard things on Wednesday it’s to people he knows are bad, people already guilty of what he’s seen they’ll do on Thursday. What technobabble exists to justify the time-jump makes a lot of the superpositions of each alternate timeline, the Wednesdays when he saves the day, the Thursdays when he doesn’t; more important is the moral superposition it allows, the literal god-mode, freeing him utterly from any gnawing doubts at doing what by God must be done, by already having shown him what will happen if he won't.

Not even the ticking time-bomb’s so baldly stacked a deck.