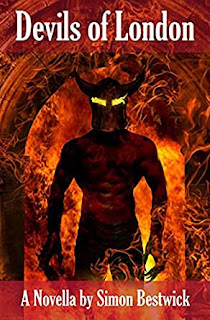 The new novella from British Fantasy Award-nominee Simon Bestwick, out now from Hersham Horror Books, dances between urban fantasy, horror, and social commentary. The story is decidedly British, with British sensibilities and concerns that flavor the narrative throughout its brisk telling. When a story is light on plot, as it is here, success is measured by the story’s execution. Originality. Commentary. A situation that lingers with you long after you’ve finished reading. Devils of London has the pieces to be successful—timeliness, an interesting point-of-view character, high stakes—but ultimately, the execution of the story as a whole falls short of its promise.

In the near future, a slightly-steampunk London is once again beset by a terrible fire. John, an undocumented worker toiling out a meager existence in a London factory, finds himself trapped between the flames and a roving band of vigilantes who have decided that foreigners are the problem. On the run from these “yellow-scarves,” John and his fellow workers are forced back into the city’s center, where they encounter a bare-chested devil in a horned helmet. Awakened by the flames, the devil is there to do what devils do: feast on the blood and the fear of everyone he encounters.

Devils of London is a non-stop chase scene. John and his buddies barely have enough time to cover their noses in torn curtains to protect themselves from the smoke before they’re forced to run somewhere—anywhere—as the yellow-scarves or the devil or the flames threaten their lives. The big reveal is that London is destined to burn, over and over, pegged by dark forces that wait patiently for mankind to creep close enough to the edge that it doesn’t take much to tip them over.

The novella is a quick read. Fans of gore will find some entrails to enjoy. Readers looking for character development or deeper meaning might put down the book disappointed. Bestwick teases some threads of something deeper and critical of our modern way of life, but never fully weaves them together. I suspect native Londoners will understand the divided society he portrays here better than me, a fairly typical American white guy. In his author comments at the end of the book, Bestwick describes himself as a political writer. He has more to say, about the ravages of industrialization, the plight of immigrants, and the speed with which one group can scapegoat another. We don’t see enough of any of those deeper ideas to feel satisfied. In the context of a novella, there isn’t enough space. The book relies heavily on the reader filling in the blanks. For example, the reader must understand that the yellow-scarves are much more interested in hunting down brown people than they are fleeing the burning city. Are there people in the world like that? Sure, but it’s a challenge to understand their motivation, in life as well as in fiction, and the book never attempts to offer an explanation.

I don’t question that the yellow-scarves exist, on Bestwick’s side of the pond or mine, but I would have enjoyed seeing Bestwick turning his eye on them in a more detailed way. As they are, they are caricatures, as single-minded as the devil itself.

This book’s promise is enough to make me curious about Bestwick’s other work. Devils of London is the first time I’ve encountered his writing, and what I see here suggests his success is well-deserved. The book makes the interesting choice of revealing the devil’s inner monologue. While this strategy gives Bestwick the chance to explore some different language, the insight it grants diminishes the terror we feel in the face of such a monster. The devil just doesn’t have anything interesting to say, and in the end, even it comes face to face with its own doubt and self-loathing. Devils and humans aren’t all that different, it seems.

I don’t want to judge Devils of London based upon the book I wish it was. That’s unfair. Bestwick sets to provide a quick romp through a burning city, and he accomplishes that nicely. You won’t feel like your time is ill-spent by reading this fast-paced novella. But Bestwick’s urge to explore the steampunk present of a modern London is rich with combustible material, and I can’t help but wish this spark had led to a more robust fire.