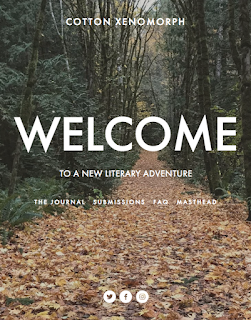 This indie online magazine looks smart, and features fiction, poetry and interviews with a literary slant. Practically all the authors are graduates of one or another of the creative writing programmes in the US; the whole zine has a strong North American bias. The quality is high and it has a professional feel. The only slightly off-putting thing is the floating banner which appears at the top of every page and is there, inescapably, as you read, which says ‘Cotton Xenomorph—No Creeps.’ What does this mean? Does it mean ‘we don’t feature creeps’, ‘we don’t like creeps’, ‘we don’t want them reading our zine’? And what is a ‘creep’? Am I a creep? Gosh, I hope not.

The fiction here appeals to me a lot and certainly I couldn’t spot any creeps, though there were intimations of ghostly beings and supernatural powers which made my flesh creep on occasion.

Michael B. Tager’s piece, for example, ‘This is not a ghost story,’ contains the kind of tangential references that evoke an altogether disturbing atmosphere. The story follows three kids as they explore the basement of a deserted house for signs of a friend who has disappeared. Tager is good at the clipped dialogue and the details that suggest small-town US life. The kids do experimental stuff: they bond, they swear allegiances. The narrator returns years later to reflect on earlier events and there’s a sense of time having passed away and things being long buried. Youth has expired for the narrator but there is a lingering atmosphere of something sinister and never quite resolved in this disturbing debacle.

Ruth Joffre takes a similar subtle approach in her story ‘A Girl with Kaleidoscope Eyes.’ There are some beautiful descriptions which evoke a sense of wonder and a child’s eye view of the world. Colours, flavours and geometric shapes all contribute to the story’s slowly building tension. The story follows a session of show-and-tell in a class of five year olds: “She passed the jar of honeycomb around the classroom, allowing each of us to hold it in our hands, to lift the jar over our heads and watch the sunlight flicker through the raw honey, like love through an amniotic sac.” One girl brings nothing to show, but each child is invited to look into her eyes and sees something different. Joffre brings off a chilling conclusion with an accumulation of details, proving that less really is more.

Childhood is also the theme of Ross Showalter’s superb short piece ‘Little Changes, Little Child,’ which is told from the point of view of a father, visiting his deaf son who he has placed at a boarding school. Well-chosen details draw the reader into the adult’s sense of fear and inadequacy as he counts the cars in the car park before entering the school. The sense of separate worlds is beautifully drawn out. The child’s feelings are beyond us but the sense of the father’s exclusion, his sadness, got to me.

John Manuel Arias writes brilliantly and creates a miniature masterpiece of suggestive prose in ‘Lulú’s.’ The characters do nothing more than hang out in a seedy bar, exchanging comic innuendo. The eponymous Lulú never appears in the story. It’s less a story about events and more a glimpse of lives weaving into one another. What are we to take from such a brilliantly-cut fragment? A sense of habit, repetition, of time passing and being consumed?

‘The Father Suit’ by Nathan Willis is set in a post-apocalyptic US. It features an unreliable narrator in the sense that he seems to have not a clue what’s going on. The setting has a kind of vintage feel to it with only spent radio signals and characters who seem compelled to make suits with the aid of which they adopt roles suggestive of outmoded societal values. It’s faintly disappointing as a story, what with all the incomprehensible dreamlike transitions, but it does capture something of the current zeitgeist.

‘Exorcisms for the Extinct’ by K. Victoria Hernández is much more of a happening story about a woman who travels around with the ghosts of extinct animals, visible only to her. There’s a great scene in a restaurant where the woman ignores her useless date (a bloke from Tennessee with an ego the size of a house) to give all her attention to a much more absorbing scenario in which a ghostly sabre-toothed tiger stalks a very real and frightened pet dog. Great! The road trip she takes with a car full of ghostly animals has a kind of poignant power all of its own.

Yet another story that takes childhood as its theme is K-Ming Chang’s beautifully written ‘Silkworms.’ The author takes us on a journey into the culture of Chinese-American immigrants, through the eyes of a group of children one of whom has disappeared (another repeated theme in this zine). The style is strongly parenthetical and what we learn about this apparently fated group is of the strand of suicidal despair that runs through their families’ lives, each of which has its tragedy. It’s powerful and precise prose, except perhaps for the silkworms themselves which seem reduced to a cliche in their metaphorical role.

The poetry in CX concerns similar themes to the fiction, exhibiting veins of melancholy, nostalgia and a yearning for the natural environment. Stylistically, they’re delicately nuanced and serious.

Erika Luckert’s ‘Preparations’ is a beautiful meditation on transitory reality, employing precise imagery to convey an unutterable sadness about the human condition. The poet imagines taking an x-ray of a rose: “there will be stipules, thorn and stem, / the rose’s hip, all its pertinent pieces / lit as per their destiny.” Gradually, the botanical references morph into the animal: “parts in them like parts I’ve seen in me.” Heartbreaking.

In ‘How to Draw a Topographical Map,’ Adam Hughes brings a dark and finely observed sense of landscape and an artistic sensibility to his psychogeographical meanderings. “Where there are mountains, draw / teeth” is the opening instruction, setting the tone for the supreme line: “Always draw / with” … “your fingers wrapped around the windpipe of a shore bird”. Quite where the poem takes the reader I don’t know—on a strange tour of the earth, perhaps.

‘Twenty—Twenty’ by Crystal Ignatowski really has to be seen on the page (or screen) to be appreciated. Its stanzas form a repeating pattern, like morse code or possibly the bars of a cage. To me it speaks of alienation and a sense of inevitability. It suggests: ‘love in the time of coronavirus’ … a mingling of desire and fear. Perhaps a little less serious is Lukas Ray Hall’s ‘What if you inhale paint fumes?’ It’s a stream of consciousness poem exploring what might well go through the mind of an adolescent as he paints a wall. There’s something of the obsessive-compulsive in the repeated phrases and the liberal use of the ‘&’.

Carla Sofia Ferreira’s ‘Lunulae’ is a brief but fascinating exploration of all things crescent-shaped. It’s another poem which has a strong visual presence, the broken phrases making crescent shapes as they progress down the page.

I suppose, as a literary zine, CX felt it just had to have some interviews with writers. My initial feeling with interviews is that, unless I’ve read an author and enjoyed their work, I’m unlikely to get much out of an interview. But, aside from a grouchy moment I had when reading the beginning of Hannah Grieco’s interview with the poet, Todd Dillard (“just between you and me… are most of your poems autobiographical?”), I was pleasantly surprised to read some really quite interesting reflections on magical realism, fatherhood and family relationships. What a good thing they didn’t keep it all to themselves.

With a rather better vein of questioning, Hope Fischbach elicits some fascinating responses from Lorena Alvarado on women and power relations in North America, in the process exploring daughter-and-motherhood, violence against women and the persistence of misogyny in society. Alvarado also discusses her motivations as a poet and her belief that writing is a form of being in the world: “a road we’ve drawn on our map.” After reading this interview, I seriously wanted to get hold of a copy of Alvarado’s chapbook: red line lullaby.

Well, Cotton Xenomorph is seriously literary and showcases some amazing talented writers. I do wonder (just between you and me) whether I’ll be considered a creep for writing what amounts to a positive review but, what can I do? It’s certainly worth a peruse.