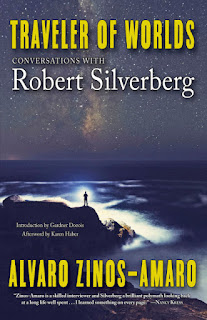 “Retiring” in 1976, Silverberg returned in 1980 with a new phase to his career: not only a big novel in the accelerating fantasy (or rather science-fantasy) mode, but a series (something he had rarely ventured on): the “Majipoor” sequence beginning with Lord Valentine’s Castle which eventually stretched to nine novels/collections. He also published a number of novels and award-winning novellas leading up to his final retirement for fiction (he still writes a column for Asimov’s)—and this impressive CV does not include his non-science fiction, non-fiction works (frequently on historical themes for young people), and his edited collections and anthologies.

What kind of man works on such an industrial scale? One of the most impressive things about Traveler of Worlds is that it’s neither a literary study nor a conventional interview but a series of conversations in which Silverberg is encouraged to talk about things—aspects of his own life, but also life in general—which interest him, in the hope that it will interest us. And it does. Zinos-Amaro is an incisive questioner who guides but never imposes. He is allowed, as friend as much as interviewer, to enter the conversation and structure the outcome, but this is firmly a book about his subject, who comes over as an interesting and erudite man: cultured, travelled, well-read; ironically and sometimes amusingly aware of his anomalous position as political conservative in liberal California, and major science fiction figure in a world that has overtaken most science fiction. (Silverberg’s American “conservatism,” probed in Chapter Three, is one I, as an Englishman of what I consider to be mildly leftist views that seem to be dangerously radical across the Atlantic, find admirable in his willingness to allow other people their own choices.)

The seven chapters are loosely thematic, with headings like “The Vividness of Landscape,” “Aesthetics,” “Enwonderment,” “Libraries,” “Pot-Pourri,” “After the Myths went Home.” “Pot-Pourri,” for instance, includes questions Zimos-Amaro puts on behalf of other fans; often bibliographical enquries that allow Silverberg to recall stories that meant something significant in his career, or simply tell illuminating anecdotes on the editorial policies of magazines in the 1950s, or the nature of his collaborations. The last chapter begins with Silverberg being asked for his perspective on age, and what it is like to look back upon a career which has lasted over six decades. They can be read in sequence, but as many topics are returned to they can be equally rewarding read at random. I turned, as a matter of personal interest to the fifth chapter (“Libraries”), and found reminiscences of libraries he had been to, evidence of the powerful role of public libraries in educating bright teenagers in the 1940s, an amusing recollection of how science fiction was classified in the early days (“pseudo-scientific literature” … “I could never find those books, I think, because there were high-school boys always ahead of me, finding them and taking them out”), and that Silverberg had, in his own extensive personal library, no less than four copies of Walter De La Mare’s The Three Mulla-Mulgars: a book that I enjoyed greatly when I was a child. In the conversation entitled “Aesthetics,” the questioning begins with “theories of art” but moves very rapidly into musings about style and narrative and Silverberg’s response to numerous art forms, but also how these musings can refer to his own work. So, while this is certainly not a critical study on Silverberg, Traveler of Worlds certainly ought to be read by anyone interested in his works, whether from an interest in the history of SF or simply through having read and enjoyed his fiction. There’s much here that will illuminate that enjoyment.

If there is a killer quote in this book, it is about half-way through when Zinos-Amaro and Silverberg are discussing the curiosity that seems to be the driving force of his life and work. “I am always interested in finding something new and strange to eat. I’m interesting in finding a book that I’ve never read before, going to a city I’ve never visited, going to a planet I’ve never visited.” How can you not like such a man? Time and again, in these conversations, Silverberg reveals a deep interest in and knowledge of something: gardening, art, music. People with deep interests are usually interesting people, and Alvaro Zinos-Amaro ought to be thanked profusely for allowing this particular person into our homes: this is, probably, the next best thing we are going to get to a proper dinner-table conversation with Silverberg. He says, elsewhere, that “I’m out of touch with contemporary society” and drops examples—word-use is a favourite example—of the ways in which the world has moved on. But he also notes that, “retired” or not “I live on as an observer.” The column in the September Asimov’s in which he notes a trend for English teachers to advise their students not to use “boring” words ought to be read by any aspiring writer. We might all benefit from his observations, and we certainly benefit from his fiction. It’s good of Alvaro Zinos-Amaro to show us why.
Djibril at 16:00
Share