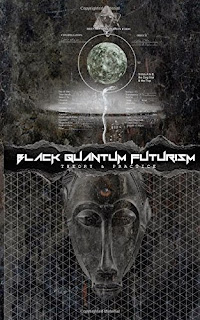 Black Quantum Futurism: Theory and Practice Volume 1 is a unique collection of essays and ideas that promises something beyond the ordinary. The basic premise of this collection, compiled by Rasheeda Phillips, who is also a contributor, and published in 2015 by AfroFuturist Affair, is that something very special happens when combining quantum physics, futurist traditions, and Black/African cultural traditions, namely that African descended people can see and change the future. All the rules, even common sense, break down, when looking at things on the quantum level. Even time can lose its meaning. So the idea that a particular tradition of thought, one from a culture or a religion, as an example, could prepare people for the strange mysteries of quantum mechanics is incredibly exciting, and worthy of exploration.

Rasheedah Philips opens the collection with “Constructing a Theory of Practice of Black Quantum Futurism, Part One.” This introductory essay gives the reader some sense of meaning and direction for the overarching concepts of Black Quantum Futurism (BQF). She describes many of the concepts, the difference between future visioning and future altering for instance, seem, with such simplicity and clarity, that a reader may forget how strange and unusual the topic actually is. She speaks of the practitioners of this theory as BQF Creatives, who work to “subvert the strict hierarchical characteristic of linear time” (12). What comes through most meaningfully is the powerful idea that there is more than one way to think about time. In western cultures, we have adopted a linear mode of time, where the past affects the present, the present affects the future, and that is that. Here, we see a very carefully crafted counterargument that looks at time not linearly, but sometimes cyclically, sometimes in pairings or patterns or probabilities.

In Dr. Imani’s essay, he appears very critical of science and math for focusing on western perspectives and philosophies when African thought, especially, the Swahili understanding of time, has much to offer such disciplines. He opens by explaining the role and purpose of Africana studies, which is not simply the study of African culture or people, but the study from an African perspective, which immediately begs the question, where else, what other fields, disciplines and topics, could benefit from such an approach? He makes the case that quantum physics, which grapples with the most baffling of spacetime mysteries, could be greatly enriched if someone were to consider Swahili concepts of Zamani and Sasa, or macrotime and microtime.

Later in the collection, other ideas are added to the mix. “Odd futures: How Hiphop Defined Post-Modernism,” by C. Longmire, makes a particularly interesting comparison between postmodernism in visual art and postmodernism in music, demonstrating the role and creativity of DJing and turnstyle techniques to challenge and push the boundaries of art. I found this essay to be particularly informative, easy to read and packed with humor. This essay also fit with the collection as the author connects the African perspective to postmodern aesthetic.

The contributors to this collection have many impressive credentials, especially, Dr. Nikitah Okembe-Ra Imani, who makes the most progress toward illuminating the audience about this intriguing project. Dr. Imani has a PhD in Sociology as well as two master’s degrees. Rasheeda Phillips, the force behind the project, is a practicing lawyer and advocate, as well as a writer. What is noticeably missing is an author with a physics background. The presence of such a contributor would certainly give credibility to the more abstract claims being made, but I think could also have added a richness to the discussion. What I think is most interesting about this book is the intersection of the hard sciences and the unique and longstanding perspective of the Swahili, or other nonwestern people. Someone with hard skills in physics could have added a level of depth and detail that would have greatly increased the resonance of that narrative. Readers more interested in futurism or in the unusual collection of Black perspectives won’t have that disappointment. This book may in fact be written for an audience already aware of futurism and its traditions. As a newcomer, I felt that there was a much larger conversation going on and I wasn’t getting the whole picture.

The collection, at 84 pages, is so short that I wonder why it is released in two volumes. I also have to wonder if it was rushed into publication. Typographical errors occur so frequently, they become a distraction. At one point, an entire sentence is repeated. More often, sentences are interrupted with commas or misspellings that are likely to trip up the reader who is struggling with challenging and abstract ideas.

After reading this volume, I’m not sure what this collection is trying to accomplish. The first several essays, which in fact are the hardiest in terms of depth and complexity, grapple directly with challenging ideas of time and space. The authors delight the science fiction reader with spectacular ideas when viewing quantum physics from an African tradition. Later, shorter essays seem to go off topic. One essay looks at the current plight of African Americans, quite forcefully expressing the need for drastic changes. Another looks at money and the challenges communities face because of it. The two essays both discuss changing the future, but calling that a connection feels like a stretch. The essays on their own make cogent arguments, but the collection seems far from cohesive.

I can’t say that the book answered all my questions, but I think that it is doing something very important for both the progression of science and equality of non-western perspectives. The idea that African cultures and traditions, that any non-western tradition, has an approach or a system of thought that could elevate and help navigate through the complicated halls of modern science could be the next scientific frontier. Science fiction fans should make their way through the collection just for the chance to be inundated with such innovative ideas of the genre.
Djibril at 16:21
Share