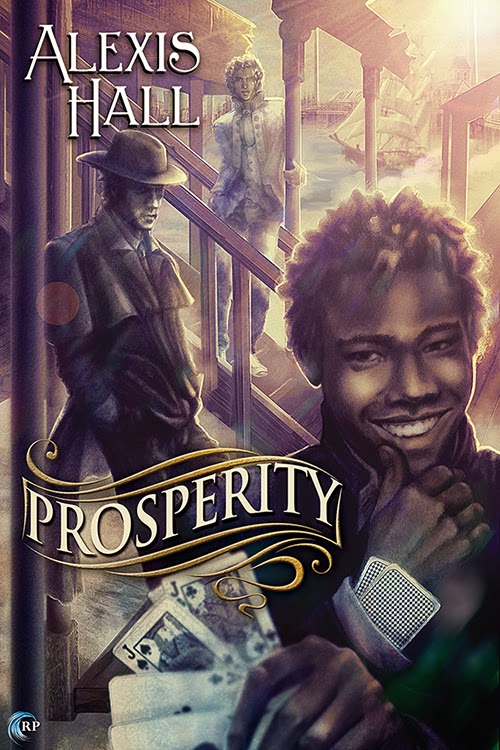 Prosperity, written by Alexis Hall and published by Riptide Publishing, is a delightful, wacky novel that challenges every existing genre. Readers follow the protagonist and narrator, a young petty criminal with a heart of gold, as he battles clockwork exes and flies across the universe, fleeing monsters. Piccadilly, as he named himself, doesn’t mean anyone any particular harm but has more fun getting into trouble than anything else. He leaves a dingy, hopeless underground ghetto known as Gaslight, and travels to Prosperity, a lawless skytown somewhere over England kept in place miraculously through skyhooks. Strength and force are the only rules in this lawless region, which attracts people from every unsavory walk of life, including our protagonist Piccadilly. Though lovable, Piccadilly would be any other card sharp/thief/prostitute, if he hadn’t ripped off the wrong man and triggered a set of events sending him off on marvelous adventures with the absurd, ragtag crew aboard the beautiful and impossible aethership, Shadowless.

After an assault, Piccadilly is rescued by the Shadowless crew, individuals who are as mysterious and impossible as the aethership they operate. The ship’s navigatress, known as Miss Grey, has strange psychic powers that both delight and terrify her. She only manages to live with her unique gifts through a good dose of drugs and prostitutes. The captain of the ship, Byron Kae, is a patient, loving leader. Referred to always as ‘they,’ Byron Kae is the kind of person for whom ‘he’ or ‘she’ just aren’t appropriate. Then the two men, Ruben Crowe and Milord, at once love and do not love each other. Ruben Crowe is a handsome former clergyman who lives his life morally but left the church because of sincere disagreements; Milord is “a dastardly crime prince” with no moral compass. He assaulted Piccadilly in the first place, and after weeks of recovery, Piccadilly has to balance staying near enough to Ruben Crowe to seduce the irresistibly beautiful man, and far away enough from Milord to avoid meeting his own demise at the hands of the psychopath.

Taking place in the year 1863, in an alternate universe with a different history and set of technology than the reader’s own, the book requires a moment of adjustment. Told in first person by an uneducated conman, the vernacular is thick with pronunciations and poor grammar. Even worse, because the story takes place in an alternate 19th century universe filled with monsters and steampunk technology, the author has to spend several pages introducing ideas and vocabulary, which makes the reading slow. The patient and determined reader will be rewarded, however, as Piccadilly’s narration eventually makes for smooth and effortless reading. Yes, the narrator’s style takes some getting used to, but it actually has quite a bit of charm. The author, Alexis Hall, must have worked tirelessly on Piccadilly’s language. Piccadilly’s accent sounds complete and well developed, his voice believable. The card sharp speaks with the colorful language we would expect. Piccadilly never lacks for metaphors, similes and alliteration in his narrator’s telling of the tale, which leads to a read that is just plain fun. The language itself is filled with western vocabulary and unusual sayings. For instance, Piccadilly describes Prosperity as “more rickety and tringum trangum than most” skytowns early in the book.

Also adding to the joy of reading, Piccadilly loves to swear. It is clearly not done for shock or out of gratuity, but rather as a natural extension of the characters and setting, rough petty and not-so-petty criminals, poor western frontiersmen who are not proper and would not use proper language. Swear words, even those that would be too taboo for a feminist like me, are never used in malice, but in the spirit of a Wild West frontiersman, with charm and wit, in sometimes surprising ways. For example, Piccadilly says of the navigatress, “She had this way about her to make a perfectly respectable curse word sound filthy.” Hall’s use of imaginative language is so embedded throughout this story that his cussing only adds to the delight.

Though this novel is a science fiction fantasy western thrill ride, it would also have to be considered a romance, complete with its obligatory sex scenes. The sex scenes are somewhat graphic but, like the rest of the novel, fun and quirky. Readers who avoid such things had best leave this novel alone. On the other hand, hardcore romance readers might find the few short scenes disappointing. I would say, however, that the author has built the longing and desire so well into Piccadilly’s character and narration that readers are sure to experience that longing and desire alongside Piccadilly for much of the book. Regardless of where readers may fall on the romance spectrum, Prosperity has enough going for it in its storyline and in its characters, that such scenes may be enjoyed as but a small part of a complete story.

It may be a romantic love story, but it is not like other love stories. A guttersnipe like Piccadilly knows better than to expect happily ever after. Fueled primarily by lust, Piccadilly has never been in love and isn’t sure he even believes in the concept. However, he slowly falls in love with the upright Ruben Crowe, and questions everything he knows about his world and his way of life. Piccadilly’s conundrum is only complicated by the perplexing love triangle he finds himself in with Ruben Crowe and Milord. The readers root for their dear protagonist, but also recognize that in real life we don’t always get what we want.

Some of the events in the plot seem to have tenuous connections, but the thrill of the adventure and the pleasure of drifting inside a charming criminal like Piccadilly makes Prosperity too much fun for anyone who considers themselves fans of western, steampunk or romance to miss.
Djibril at 17:08
Share