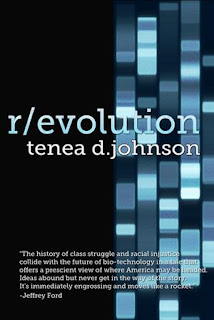 The scope of this series of interconnected tales is nothing short of epic. A stylishly presented larger tale covering the state of the USA as it turns upon a near-future of decreasing resources and heavy social unrest. Thematically, this is not a frivolous book; it is politically driven with strong views on racial and social discrimination. Set in a future that is decidedly dystopian, we learn that the rich and powerful are controlling not only the wealth, but also the genetic future of the country, affording as they can to have their genomes tweaked for fashionable statements and improved health in an increasingly collapsing environment. Underneath this the dispossessed, particularly the poor and coloured citizens, struggle with industrial poisoning, starvation and racist violence, leading to near civil war between the haves and have-nots. Into this steps a brilliant young geneticist whose attempts to make genetic reparations to the lower orders does not go quite as he planned.

On her website, Johnson claims that she is ‘adoring of ideas’, that she ‘lives beneath a 300-year-old oak.’ But this is not a woman of utter, fanciful whimsy; she also claims to have a ‘swell of honesty (sometimes refreshing, sometimes catastrophic).’ And her writing is about as honest as one can get about what must be very heartfelt opinions. The politics of African-Americans is her metre, but she is just as much concerned with the broader canvas of social justice. On issues of class and race, the author sees these as the most vulnerable cracks along which fragmenting human society, struggling with environmental and social disintegration, will break. Within R/evolution, the predominance among the poorer characters is for non-Caucasian, but through this unbalance Johnson raises once more the issue of slavery. In a modernised sense, she means those exploited workers with no rights as equated with the historical sense of black slaves brought in on the terrible slaving ships from Africa. The connection between the plantations and the modern ‘slavery’ of industrial workers brought together in chapter one where the geneticist, as a boy, hears the origins of his family name, and carried on by direct referencing throughout the book to the ‘slavery’ of the factory worker. In one story a privileged white woman is kidnapped along with other politicians’ children and held in conditions similar to those of the slaving ships in order to teach them about the pain of the black underclass then and now.

The style of the book saves it from becoming too heavy-handed, too much of a shouty polemic. Structured as a self-styled ‘mosaic book’, instead of a direct, single story, what we are presented with is a series of vignettes that colour in areas and leave the rest to the imagination to fill in. These are short stories, connected by the common social and historical-futuristic backdrop and the personal connectivity between the main characters of each tale. The lynchpin is the geneticist, the other characters emerging as satellites to his wide-reaching orbit; those that admire him, are related to him, who have worked beside him and then others besides in other stories, as well as the children who are the results of his procedures. As an exercise in writing, it is remarkably bitter-sweet. Time passes with the unveiling of each story; we are being allowed snapshots along a wider timeframe, as if we had privileged insight into moments in a historical narrative. In fact, this is the strongest impression I had: that these are the main figures in a historical past that I was being allowed to see, to gather from them, from the stories of individuals, the progression of history. This writing reminds us that history is human history; it begins and ends with the decisions and actions of individuals who are in the right place and time to make differences. Writing on black-white relations and the political strife that marks this history in the USA is not new; a great number of authors cover the same subject in a variety of ways. Johnson’s talent is in making a proposed, and possible, future condition sound as realistic as a well-known past: effectively, nothing changes that much. People and their politics rise and fall; sometimes times are good, sometimes they are bad, but they carry on, because people carry on. There is an incredible sense of hope in this—life does carry on.

And this is despite the extremism that Johnson appears to see as the biggest enemy to peace and tolerance. There is racial extremism. White supremacists, the heirs of the KKK, self-titling themselves as ‘knights’, openly attack black communities with bombs and lynching. In an era where, we are told, inter-state law enforcement has collapsed and communities are left to defend their own, the geneticist is persuaded not only to create children healthy enough to survive the modern environment, but who are also strong, fast and efficient, to act as the shields of their town. Facing these new sprigs of humanity is religious extremism. Johnson does not forget the bigotry of the closed-minded against the new. The genetic alterations are seen as aberrations against God, the resulting children are treated with hostility and the geneticist damned for playing God. The irony is that the strongest hate in this quarter comes from the very poorer communities that the genetic ‘reparations’ are trying to help. Johnson seems to be showing us that old human foolishness: fear of difference. And by this means she is also showing us that such fear, leading to ostracism and even violence, is not just a white-black/rich-poor division; that even the underdogs are not helping themselves by clinging to superstition and dividing their own chances of survival. Johnson may have stern ideas on social injustice, but she is equally critical of those who waste opportunities. The ‘reparations’ are attempts to bridge something of the wealth/poverty gap, at least on the terms of the wealthy and powerful, moved to a genetic level. In this way, genetics is the new political, social, religious battleground; it is the new history book where progress, failure and change can be measured. It is also insidious. Instead of material change, changes which can be lost with war and natural disaster, the changes are those that the individual can carry with them at all times, no matter what obligations are laid upon them by others. And there is mention of the dangerous side of genetics; the ‘voodoo doll virus’ is a genetic nightmare that hunts down a specific person based on their DNA to infect them with a fatal illness. Assassination with no escape; genetics may improve lives, but they are also the ultimate weakness. This is the debate of human-ness inscribed within the very body itself; the social-political brought into the most intimate space of all, so there is no escape from the effects or the responsibilities.

Across all of these dialectics is, of course, the narrative archetype of Us and Them writ large. Johnson’s genetic alterations are seen by their supporters as the next stage for human evolution, the created beings are stronger, healthier and more vital than the non-enhanced. This is the Monster Dialectic: who emerges as the better being; the creator or created? This is the Child Dialectic: will the offspring make a better go of things than the parent? The stories raise questions over humanity’s future through the humanity (or lack of) in those involved in upheavals and change, and for all of them the choices come down to stay or go, change or fall. The ‘other’, the ‘monster’ comes across as the hope of the world. The final word is the first-person ‘statement’ of one of the geneticist’s last living creations. Having seen his entire family and community literally blown apart (by a catastrophic bombing), the last man standing is left to consider why he continues; for continue he does. It is, he feels, the boundless ability of the genetically enhanced to move on, if not forget, with the suggestions that the non-enhanced are also capable of this, if they try. Furthermore, this lone survivor with strong, almost perfect genes is prepared to share his DNA in a clinic to improve the position of those at the most disadvantage. This ‘monster’ is prepared to help the race from which he sprang, even while it fears him for his skin colour and his difference. This is Johnson’s hope.

And that hope is manifest in the love (or lack of it) that each character gives and receives. There is the hate-filled, yet loved, stepson; the loyal triplets; the embarrassment of a traumatised daughter (to a wealthy family); the driven young genius and his grandmother’s love and affection; poorer families broken due to illness; the sense of community among the poorer districts; and the genius geneticist’s positive decision to actively help the less fortunate instead of taking a cushy job in research. Those in loving situations notably blossom; affection is vital to human happiness. And yet those who are the most lost—the enhanced triplets living under their township’s suspicion, the ‘forgotten’ daughter, the repentant terrorist—are those who are the most driven to do what is ‘right’; out of crisis comes the most good.

The book moves at a feisty pace, the content is uncompromising and marvellously lacking in over-sentimental fluff. This is a thought-provoking, moving and clever piece of writing, which seems to shift the turn with definite sense of musicality; a symphony of meanings. I was intrigued and challenged. Highly recommended.