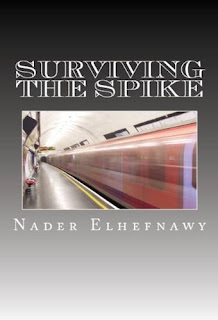 Surviving the Spike is a near-future novel, taking place in the 2070s. Dr. Elhefnawy uses this setting to create a novel that is not quite sure whether it wants to be a black-ops spy story, a polemic on bioethics and religious philosophy, a shoot-’em-up thriller, or a romance.

Our protagonist is a young woman named Bobbie, who at the age of 17 finds out that she is the result of a genetic-modification experiment with which her parents complied. Mysterious Men In Black yank her away from her home, tell her that she can never again contact her loved ones, and set her up with an apartment in a new city and a job for which she isn’t qualified. At this point, the author has a problem. The story he really wants to tell takes place several years later, after Bobbie has worked at her secret surveillance job for a while and gained experience, technological knowhow, and a healthy dose of cynicism. But how to describe her gradual evolution from sheltered teen to jaded spy? Unfortunately, like many a first-time author, Elhefnawy couldn’t find a way to make this happen other than by violating the all-important “show, don’t tell” rule. So we get pages and pages of text telling us that Bobbie is learning her job, and that in her spare time she hangs out in coffeeshops eavesdropping on other people to learn social skills. We’re even told that she engages in several relationships—although the phrasing is vague, I believe we’re intended to understand these as sexual/romantic relationships—all of which eventually fail when Bobbie is unable to tell her partners anything about her past.

The reader comes out of these exposition-dumps understanding what the author wants us to know about the character, but not really “feeling” it. A few well-crafted anecdotes could have accomplished the same purpose and engaged more interest. Similarly, later in the story a love interest is introduced, apparently just for the sake of character-building; but again we are merely told that Bobbie finds the man charismatic, while the author’s depiction of him gives no clue as to why this could be.

As the plot progresses, Elhefnawy effectively builds suspense by showing that the more Bobbie learns about surveillance and tracking technology, the more paranoid she becomes, suspecting that the MIBs who ripped her from her family are still watching her. Though she wants to try to find and contact the people she used to know, the fear that her every move is being watched holds her back.

At the same time, Bobbie occasionally overhears snippets of conversation that seem to provide clues as to where her story might go. The reader is never certain which of these concepts might eventually become relevant to the story. Bobbie spends some time wondering about the genetic modifications that were made to her, and whether they relate to the particular job that the MIBs chose for her. Yet, where one might expect her to do some research into the latest GM developments and technology, she doesn’t: a curious omission. Other conversational threads introduce a new religion based around uploading one’s consciousness into virtual reality, and various geopolitical struggles; but none of these threads seem to be going anywhere either.

Are the MIBs watching Bobbie? Did they set her up in her surveillance/courier job for some nefarious purpose, and indeed, did they genetically tailor her skill set for that job? Is there some pattern to the assignments Bobbie is given? Do the antagonists she encounters have something against Bobbie specifically, or just against her employers? In the end, unfortunately, most of these questions remain unanswered. New plot threads crop up toward the end of the story, which provide a fairly pat resolution to Bobbie’s predicament, but without resolving what had earlier seemed the important questions. The forward momentum of the story is derailed (almost literally) by a bizarre interlude that finds our hero stranded somewhere in Russia, having inadvertently become part of an internecine struggle that has nothing whatsoever to do with the rest of the plot. Given the nature of the assignment that Bobbie is on at this point, and the surveillance technology that the author has so carefully described previously, it’s hard to suspend disbelief and accept that Bobbie can disappear into this side plot for several days without her employers—or her enemies—finding her.

Also problematic to me is the fact that, beyond the first few weeks, Bobbie apparently never spares another thought for her parents. Even as she devises complicated spy programs to run on the worldwide network searching for the people she knew prior to her abduction, no mention is made specifically of her parents, nor does she seem interested in finding them any more than her friends or acquaintances. This was difficult to credit.

In summary, Elhefnawy has the basics of an interesting story, but makes the common mistake of introducing too many plot threads, which seem to tangle him up. In the end, he can’t do them all justice, so most are left hanging. The book would have benefited enormously from the attentions of a good editor. In particular, several major, glaring plot holes could have been avoided, character development improved, and unnecessary scenes pruned. There is some really good meat here for interesting discussion of concepts such as the nature of friendship, the psychological implications of digitizing personality, the ethics of experimenting on humans—all of which are touched on at least to some degree—but a more carefully crafted plot would allow for more nuanced exploration of these ideas. (A good editor could also have introduced the author to the correct construction and usage of the past perfect tense.)