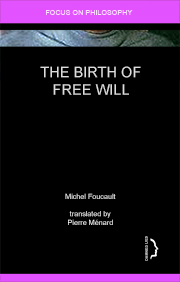 When reviewing a dead author, one must be an archaeologist of sorts. One must read beyond the mere narrative, and open before oneself the text like a map, being careful about the paratexts and everything that surrounds the text. This Genettean approach is very useful in cases like the chapbook I have in my hands: The Birth of Free Will, by Michel Foucault. This is a very special book, because, among the whole work of the French philosopher, this is the only one he explicitly asked that be published only after his death. The fact that it took so long to finally see the light of day probably has to do with the fact that it’s about a book that doesn’t exist. Or rather, about a book that does not quite exist the way Foucault tells us. An alternate book, so to speak.