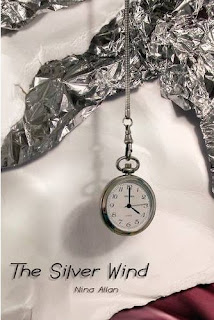 Clocks, I venture to suggest, are the most unadorned form of story. Their inherent conflict between the precision rhythm of mechanism and the seemingly inevitable friction drag of entropy drives the plot of time. Listen carefully, however, for true clocks are not unadorned, within that remorseless tick tick tick tick tick are patterns and digressions.

Nina Allan’s The Silver Wind adopts clocks (not time) as central device. The broken clock, the altered clock, the stolen clock each take a measure of time and recast it in review, rewind, in repeat. The four stories here (along with an afterword I am tempted to disregard as unnecessary and unhelpful) share the repetitive pattern of a clock. Each involves some of whom may be, or appear to be iterations of the same people, yet there are differences, subtle and obvious, in each instance. The narrator Martin’s living sister becomes a dead brother, a lost wife, an alternate. Read collectively therefore, there are patterns and deviations. The recurring character Andrew Owen becomes Owen Andrews, tick tock tock tick.

In the second story Allen introduces the horological concept of the complication, in this and subsequent instances the tourbillon, a device to simulate freefall, removing gravity from the watches mechanism, its wind, to limit running down. Having done so, she continues to describe people and places in a deadpan, precise, taut prose reminiscent at her best of the quiet, bare short fiction of M John Harrison. If Allan, or her characters are not as overtly misanthropic as Harrison’s, she shares his acute observation of the grotesque within people and a directness of approach to this.

Flannery O’Connor insisted that the writer of the fantastic needs to ensure a more intense level of reality, and Allen achieves this to a point. In The Silver Wind clocks ensure grounding in the mundane even as time appears to warp all. Opener ‘Time’s Chariot’ is a literary family set-piece which shows no sign of the fantastic in isolation, but when ‘My Brother’s Keeper’ reworks this with a possible ghost we see what Tricia Sullivan means when she writes in her introduction that the stories ‘haunt one another’.

Only with the title story itself are we explicitly in fantastika, a dystopian near future under a racist government and military control exemplifying entropy in society’s structures. This time our narrator risks entering a restricted area to meet a mysterious dwarf (a significant character with avatars in the earlier stories) who he hopes can reset time to bring his ex-wife back to life. This, it appears, is impossible but the fallout from the attempt reveals variant universes, suggesting a link to the earlier stories. It is at this point however, when Allan abandons her realist mode for a dark mysterious surrealism, that decay enters the system and her carefully constructed mechanisms show signs of breaking and running down. The little detailed exposition of this is more than in other stories where scenes are set in fragments of street names and one-line leftfield impressions. ‘The Silver Wind’ therefore stands out from the other stories, is almost in opposition to them, but binds them as a whole. Where reality was confronted head-on and fantastic obliquely, the fantastic is made explicit and reality disappears. Tick Tock Tock Tick.

There is a brooding awkwardness in every relationship here, a function of characters changing identities between stories, but also Allan’s characters are uniformly cold, artificial and given to false notes like this:

‘He pointed to one of the entries, Juliet Caseby, with the surname in brackets, 24 Silcox Square, Hastings. The postcode began with TN, which Martin knew was for the main sorting office in Tonbridge.’

People just do not think like that, and that last sentence is both jarring and unnecessary. That it works at all is down to the quiet prose breaking down at mostly the right points. That it almost fails is that there are no real characters in most of The Silver Wind, there is a literary artificiality consistent with her use of the measuring device, the clock, ahead of the natural phenomenon, time, that will not be to some readers’ taste. The title itself, The Silver Wind, might be Wind as in breeze (a natural variable phenomenon) but in my mind it might more likely refer to the mechanism of the clock, the Wind, a tense construct.

Ultimately I finished The Silver Wind unsure of what I had actually read and not a little puzzled by how it meshed together. Nevertheless, this is a remarkable book where execution almost matches conception, and one that I will be drawn back to. In time.