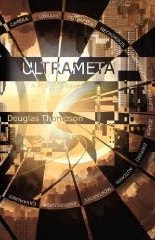 Ultrameta is hard to categorize. Part scifi, part detective story, part extended meditation on the human condition and the modern world. Its “hero” is Alexander Stark, a University professor, who goes missing, apparently amnesiac, and reappears after a decade, then kills himself. Or he and his wife, Charlotte, may have died in a car crash, and the novel’s entire setting may be fiction written by Stark. Or (again) they may both have flitted off to another plane of existence. Or perhaps it would be better to say that the hero is a consciousness that has existed throughout history. This consciousness was somehow tapped into by Stark, now (apparently) dead, and he wrote about his experiences from its point of view, moving from subject to subject, leaving that subject when he or she commits suicide and awakening the next day in a new body, often unaware of its history or what to do next. It/he/she is guided and aided by a mysterious group of “Keepers” who provide clothing, instructions, etc..

The book is structured as a series of short vignettes, which vary in coherence from straightforward narrative to poetic stream-of-consciousness. The many vignettes form a multifaceted view into this fragmented world consciousness, which some perceive more clearly than others. They are interspersed with scenes of the investigation into Stark’s disappearance by a detective inspector, Walter Dundas, and a reporter, Martha Lucy, as they find connections between Stark’s stories and events in the real world. As an example of how the book turns in on itself, these inserts were found on Stark’s body after his suicide. So he has been telling their story as much as they have been reading into his.

The tone of the book is melancholic. Decay and alienation are constant themes. Humans and the structures they build decaying together and becoming one is recurring trope. Terrorism (especially 9/11), imagined as a confrontation between ancient and modern worldviews, casts its shadow as well, as do class and inequality.

Ultrameta wears its classical influences on its sleeve: stories include settings like Roman Britain and Greek myth; the organization recalls Dante’s inferno, even with Vergil-like guides on the journey; chapter names are often Latin or Greek(ish) words. It also buys into the Ancient Greek notion (found in Hesiod, for example), that humankind is in decline from an ancient ideal (in which this collective (un)conscious was known and understood). This decline has evidently been going on for a long time—we get an extensive lecture from a Druid to a Roman centurion on the subject in one story. It doesn’t always get things quite right when it strays into ancient stuff: the plural of necropolis is necropoleis, not necropoli; Antonine is an adjective meaning “of Antoninus”, so Antonine’s wall is wrong; similarly, miles, not milite, and Picti, not Pictii.

The book is many-layered and challenging. Sometimes too clever for its own good. For example, I found the stories that imagine an ancient mind confronting the modern world rather unconvincing (too much of a modern consciousness projecting itself outside and looking back), and the shifting focus tends to bog the reader down a little. Lots of it hangs together well, though, and it’s fun to go back from the finish and re-read, seeing connections where they weren’t apparent before. On the whole, the book is an interesting, if not always successful experiment.

Buy this item from Amazon.com

Buy this item from Amazon.co.uk
Djibril at 15:17 No comments:
Share 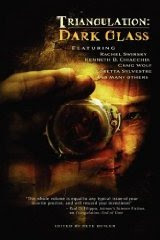 Triangulation: Dark Glass is PARSEC Ink’s latest anthology of short speculative fiction based around the collective theme of ‘dark glass’. This core theme is loose enough to allow a broad range of style and ability but tight enough to ensure a cohesive body of work within sixteen distinct tales. The collection’s front cover artwork by Vincent Chong is well-suited to the subject matter and the inner pages are pleasingly printed with an absolute minimum of errors.

However, things don’t start well. Please don’t go thinking I didn’t try, because I did—three times over—but our opening story, ‘The Milton Feinhoff Problem’, utterly baffles me. The back of the book picks out this Milton business as a highlight, but the disappointing reality is a few pages of oddly arch facts about a multiplying man called Milton Feinhoff. And why should I care about Milton Feinhoff? I know nothing about him except his preferred pizza toppings. We never find out why new Miltons appear or why they eventually die out, and we most certainly never get a reason to care. As a reader I need more than the facts to give me that emotional connection with a short story. I need a visceral, immediate hook on which to hang an idea if it’s to be recognised by my own frame of reference. The words in front of me have to become my story, with my cast and my horizon otherwise they’re nothing more than the prose version of someone else’s dream; enormously important to them but pointless to anyone else. This tale reads like a synopsis of the story we never see. The facts are all in place but the intrigue and the heart are missing. It’s a nice idea and one worth exploring but unless I’ve entirely missed the point this is a dig still waiting to be excavated. Forster urges us to ‘always connect’, and I agree. Please help us. Let us in.

Miltons aside now. Let’s move on to happier thoughts. ‘Saint Darwin’s Spirituals’ is a fascinating gallop through a ghostly London of corsets and cobblestones shrouded in spectral shadows. Here, in stark contrast to the blank presentation of Milton Feinhoff, love and pain hide in every shadow. D K Thompson’s ‘ghostgasms’ (“all the pleasures of intimacy without the messy clean-up”) are a tremendous concept full of phantasmal potential surrounded by a provocative cast of unusual characters. His writing flows with an easy confidence that inspires trust in the story and the rich descriptions draw the reader straight into the heart of things, keeping us locked and sharing Lucy’s agonizing search for lost love until the last line. ‘Saint Darwin’s Spirituals’ has the mark of a great tale: and leaving it behind was a wrench.

The wrench feels even keener as I launch into ‘Imaginal Friend’. This is a perfectly fine, if slightly insipid SF tale of humans trying to solve clues of vengeance and battle left behind by a long-extinct alien race. It gets a ‘could do better’ for its blinkered, us-against-the-aliens focus, so please beware of the following spoiler of sorts. There’s a pantomime quality surrounding the plot, rather to the exclusion of all other literary possibilities. We’re carefully led by the hand through every page to ensure we don’t miss the supposed dénouement, but have been shouting ‘HE’S the alien! It’s behind you!’ for so many pages that Chiacchia’s final taa-daa is nothing but a whimper. This makes for gently absorbing reading but I fear you’ll finish the last page sitting exactly where you were when you began. The journey is slight, the emotional impact imperceptible.

I offer this same criticism of ‘Souls on Display’, which tells of fake souls being forged out of glass to replace those broken by careless owners or, in this case, rowdy road-hockey kids. Perhaps I’m too cold and jaded to appreciate the subtlety of the sentiment but I was struggling to suspend my disbelief for Kurt Kirchmeier’s story. Too many questions were clouding my enjoyment. When does this physical manifestation of someone’s soul appear? Is it full-size at birth which raises other, more biological issues, or is a baby born holding a tiny speck of glass? I didn’t sense much ‘story’ behind the words, except the mental image of a writer sucking on the end of a pen and thinking to himself ‘what if our souls existed for all to see?’—which is a great idea. But this story reads like the first attempt to answer that pondering thought rather than a literary pleasure honed and worked for a reader’s mind to tumble over.

However, David Seigler’s ‘One Touch To Remember’ very clearly meets the collection’s brief. Jennifer finds a gallery where Roy is storing memories of powerful emotions behind dark glass and proclaiming it as art of a sensory nature. “Sight is the crudest of the senses. I deal in emotion.” But Roy’s own memories are soon to make a devastating reappearance. This is polished fiction with everything in its proper place—full background check on our main characters, a clearly defined arc in the plot—but the polish has slightly rubbed off any sheen of freshness or sharp surprise. The story is strong and colourful but somehow not the absorbing barn-burner it could have been with a few more risks taken.

‘Audition For Evil’ is a unique and thought-provoking tableau, well-constructed and satisfying in its pace. The darkness is again within the mirrored glass but also reflected in the wickedness of its mistress. And ‘Broken Things’ is one of those stories that makes me glad this collection found me. Ellen is trying to save her dead mother’s genie, Vimm, from the horrors of impending mortality after accidentally smashing his bottle. Dark glass indeed. The story is warm and honest and occasionally heart-breaking with a rare (and welcome) focus on the subtleties of a mother/daughter relationship. It brings human fears into play and touches delicately on pain, loneliness and the complexities of grief without too much lazy drear. The ending is touching and unexpected to the point of chills.

Triangulation: Dark Glass is a nicely paced adventure with lesser works sitting patiently amongst some true beauties. Others worthy of mention here include the scorching, soul-searching of ‘Deadglass’, and ‘On The Path’s soul-powered plow fraught with ancestral angst and moral dilemma. But the collection saves its finest two for last. The anthology’s penultimate adventure finds the sorcerer DuHarren unhappily passing the cursed moniker of Devil’s Disciple down the line in Loretta Sylvestre’s ‘A More Beautiful Monster’. This full, lush tale reaches maximum thrill in a matter of paragraphs, its potent language of blood, sweetness and fear exposing the duality of a priest and the razor-sharp line between the seductive longings of good and evil. Sylvestre writes through the darkness with a quiet grace and a careful touch, never letting this moving tale flop into the cliches of fiery damnation and screaming vicars.

‘Seeing Is’ renders a polaroid snapshot of hot summer childhood with precision and poetry as our final story. The imaginative detail is superb and confidently veers off-plot far enough to offer those little extras that make it truly sing. Our hero, Jody, is the sort of kid who scratches his initials in wet cement with a twig. He’s a kid we understand, even if he’s also a kid who finds a talking eye in the pavement. Craig Wolf’s writing has strong SF credentials but hasn’t forgotten what makes a human heart beat faster. He follows an untrodden path to illuminate some well-worn truths about those difficult tricklings of adult consciousness into childish naivety. Those awful moments when the grown-ups first reveal themselves to be fallible—and decisions must be faced as to whether you choose to accept and see or push it all away and remain in the blind bubble of childish simplicity. Jody makes his own choice and it’s not without pain.

This is a nicely balanced, thoughtful collection of short stories presenting an intriguingly varied translation of the ‘dark glass’ theme. The diversity of these interpretations adds a layer of interest above and beyond the sixteen actual plots and I found myself occasionally contemplating the nature of individuality and personal discrimination. Triangulation’s contributor guidelines for entry called for ‘entertaining and literate stories’, and these winning picks have, on the whole, met the brief brilliantly.